A nineteenth-century recipe with apples and apple syrup 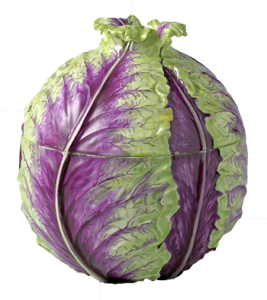 Originally I had planned a completely different recipe for this month, but then I noticed this old-fashioned recipe for red cabbage in a Dutch cookery book from the middle of the nineteenth century: Betje, de goedkoope keukenmeid. (Betje, the Cheap Cook). It is the perfect accompaniment to the recipe for hachee (a Dutch beef stew) which I was experimenting with. Betje also provides us with a recipe, but for the hachee I decided to use my own version. Although I have provided Betje’s recipe as an extra on that page.
The picture on the left is the Portrait of a Red Cabbage by the Frisian paintress Margaretha de Heer (1600-1665). Here you can read about this paintress, and here about the painting.

Most modern recipes add some acidic liquid like vinegar or wine, and in the Netherlands often some sugar too. This recipe also uses vinegar, and adds thick (apple) syrup and optionally tart apples. Moreover, the cabbage simmers much longer than most modern recipes indicate, at least 90 minutes but preferably a couple of hours.

The recipe is from the second edition of Betje, de goedkoope keukenmeid, from 1851. No copies of the first edition from 1850 seem to have survived. You can read more on the editions of Betje at the recipe for Salmon Sallad.

Much has already been written about the healthy properties of the cabbage family. I gave already mentioned some of these at the historical recipes for broccoli. It is a pity that so many people seem to have an aversion to eating dishes with cabbage! One healthy aspect of red cabbage is highlighted below. 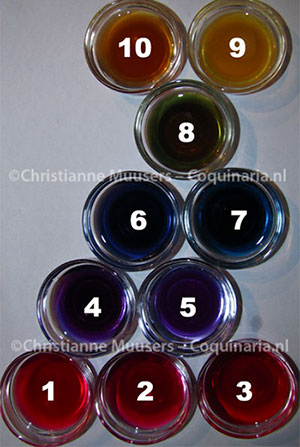 The purplish colour of red cabbage is caused by flavin, an anthocyanin, a water-soluble pigment. These are also antioxidants. Anthocyanins are used by the food-industry as colourings (E163 in Europe). Anthocyanins can also be found in for example eggplant, blackberries, blueberries, raspberries, cherries and blue grapes. The bright colours of leafy trees in the autumn are also caused by this substance. Anthocyanins cause different colours in acidic or alkaline environments. From acidic (low pH-value) to alkaline (high pH-value) the colour changes from red and pink via purple, blue and green to yellow.

Because of the flavin in red cabbage you can perform a simple experiment. Put two handfuls of chopped red cabbage in a glass bowl and pour boiling water on it until the water just covers the cabbage. Let stand for ten minutes, than strain the liquid, which should be a purple colour. This indicates a neutral pH of about 7. Pour one or two tablespoons of the liquid into small glass bowls or glasses. And now add to all these bowls different substances that you find in the house. In the picture you see the result of my experiment. But be careful not to mix the different substances, and when you have to use a spoon, take a clean one each time.
This experiment is not my own idea; I was inspired by this article. By the way, the colour is not stable, after a while the colour can change. But you can see very clearly why it is customary to add some vinegar to red cabbage.

Explanation of the numbers in the picture – 1=with lemon juice, 2=with vinegar, 3=with citric acid, 4=pure red cabbage juice without addition, 5=with turpentine, 6=with kitchen salt, 7=with baking powder, 8=with dishwasher soap, 9=with baking soda, 10=with bleach. And then I had no more cabbage juice. Just look around in your house to find things to try.
When cleaning the dishes or glasses, be sure to pour the contents one by one in the sink, with a running tap.

The recipe reproduced below is from the second edition of Betje de Goedkoope Keukenmeid (1851, p. 62). In the facsimile-edition from the sixth edition from 1877 the recipe is on page 74, with some minor differences in grammar and spelling, but the recipe is basically the same.

4. Red Cabbage.
To be cut very finely. Add a beer glass water, as much vinegar, a spoonful of thick syrup, a little pepper and nutmeg and salt if you want to. Let this simmer slowly for 4 hours. One can also add sour apples, but then add less vinegar

One head of cabbage and three apples can feed a lot of people, but luckily this dish also freezes very well. You can prepare a smaller amount by buying already shredded cabbage, but that is much more expensive in comparison. Overcooked Brussels sprouts are a complete horror, but red cabbage will really taste better as it is cooked longer. A short cooking will result in hard cabbage, so unless you like that, just follow this recipe.
For 6 to 8 persons; preparation in advance 10 minutes; preparation at least 90 minutes (according to Betje 4 hours). 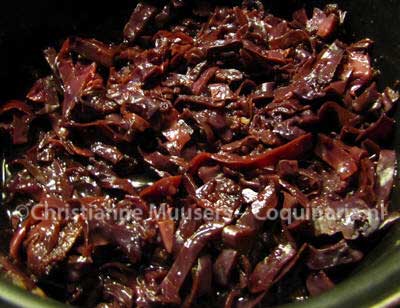 1 red cabbage (after paring about 2¼ pounds/1 kilo)
3 tart apples
3 Tbsp thick apple syrup or molasses
about ½ cup vinegar (from cider or wine, or use neutral vinegar)
¾ cup (2 dl) water
pepper to taste
A large dash of nutmeg, freshly grated
optionally some cornflour or other starch
salt to taste (added after cooking)

Cut the head in four parts, remove the white stem. Shred the cabbage or cut in thin strips, and rinse.
Core the apples and chop them in large pieces. Whether you leave them with skin or peel them is up to you.

Put everything except cornflour and salt in a pan. Bring to a boil, put a lid on it, and lower the heat. Let simmer for at least an hour and a half on very low heat. Betje even prescribes four hours of simmering the cabbage. In that case use a paraffin stove or a heat-diffuser. If you want to, you can thicken the remaining liquid with cornflour or some other starch. Salt is added after cooking. As you can see higher on this page, salt will lessen the reddening effect of the vinegar.

Red cabbage with apples is delicious with Hachee (a Dutch beef stew) and all kinds of dishes with game (like this pepper sauce), and particularly hare.
This dish will keep at least three days in the refrigerator, and can be reheated or frozen quite well.

A very old way to preserve apples is to boil thick syrup of them. The southernmost part of the Netherlands, Zuid-Limburg, is famous for its Rinse Appelstroop. Modern industrial appelstroop is made with apple juice and thick juice of sugar beets. On some sites appelstroop is translated with apple butter, but that is prepared with whole apples and is opaque, while Dutch appelstroop looks more like molasses, a very dark but clear viscous concoction. Recipes for apple butter often add spices like cinnamon. If you can’t find apple molasses, use sugar molasses instead. NOT apple butter.

The Brassica-family is large and varied. There is white, red and green cabbage, kale, broccoli, cauliflower, brussels sprouts, and these are but a few of the varieties. Cabbages are considered to be very healthy food. There is even a cabbage soup diet, which promises a weight loss of ten pounds in one week (that is really NOT a good way to loose weight, because it does not change your regular eating pattern). Other diets with cabbage are meant for people with cancer, but I can’t say anything on the effectiveness of those. You can read more about broccoli on this page, and here is more on kale. Cabbages are indigenous to Europe and Asia. The archetypical cabbage is loose-leafed and green. Head cabbages, curly cabbages and coloured cabbages are all bred. Interesting fact: leave all these varieties together in a field, and within a few generations all bred properties have disappeared again.

The editions below were used by me. Links refer to available editions.
All books mentioned on Coquinaria 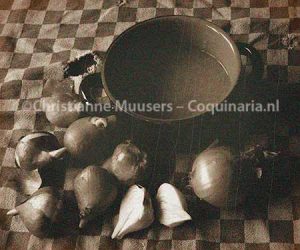 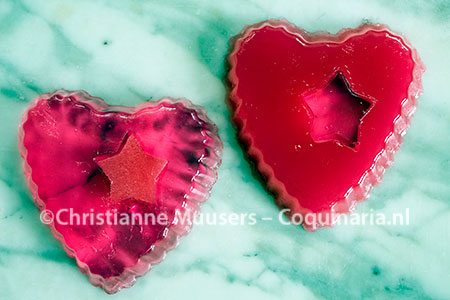 The site is in process of being redesigned. All content has to be adapted manually, and that takes time. The categories and tags below only reflect the recipes that have already been adapted. For a complete list of recipes, please visit this page: coquinaria.nl/en/recipes/.