Three years ago I published the historical version of this soup on Coquinaria, from a seventeenth-century French cookbook. For that soup you needed partridges and cockscombs (not mushrooms, but the real thing), so I do not expect many people to have prepared that soup. That may be completely different with the modern version of Dutch Queen’s Soup, which is actually a very rich Cream of Chicken Soup. The soup is popular in the Netherlands because of the associations with the Queen, and at fairs on Queen’s Day (30 April) plastic cups filled with an undetermined white liquid are sold as Queen’s Soup. On this page is the recipe for real Queen’s Soup. Just as with all kinds of soup, its taste depends on the quality of the stock you use to prepare it. If possible, make your own stock from chicken and veal, and you’ll know why this soup is fit for a queen.
First course, for six portions; preparation in advance 15 minutes (+ 4 hours to prepare the stock); preparation 10 to 20 minutes. 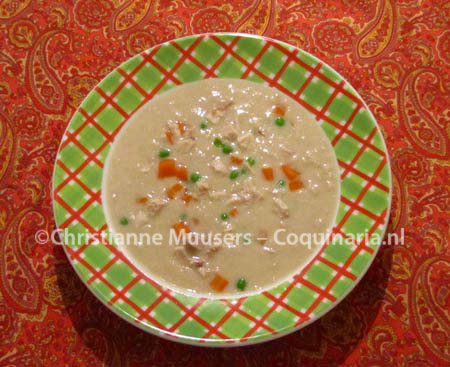 The first thing to do is preparing stock. Stock can be kept in the freezer for weeks, so just do this at any moment you want. Blanch chicken and veal for a minute in boiling water. Then put the meat in a large pan with 2.5 litre (4.5 pints) cold water, bring to the boil and add vegetables, herbs and spices. Alternatively skip the blanching, but then you’ll have to skim well before adding the greens and spices. Let the stock simmer on very low heat for three hours. Then strain and degrease the stock and concentrate to 1.5 litre (3 pints). How to do this can be found here. NOTE: No salt is added until the stock is used for making a soup, sauce or other dish.
Set 100 gram (3.5 oz) of the whitest chicken meat aside, purée the rest of the chicken meat in a blender with a little of the concentrated stock. Use the veal for some other dish, like veal ragoût, which in its turn can be used for making croquettes. Discard vegetables and herbs.

This Cream of Chicken Soup is triple-thickened: 1 – With the pureed chicken meat; 2 – With a roux; 3 – Just before serving with cream and egg yolk. To simplify matters, you can choose to use just two of the methods (1+2 or 1+3).
1 – Add the pureed chicken to the stock. You can do this before freezing the stock. This method will thicken the soup, but when you leave it standing for a while, chicken and stock will separate.
2 – Melt the butter in a pan that can contain at least 2 liters (4 pints). Do not burn the butter, just melt it. Than add all the flour at once and stir with a wooden spatula or a whisk to a smooth paste. Temper the heat and let this ‘sweat’ for a couple of minutes. Add one tablespoon of chicken-enriched stock and stir. The paste has now become a dough. Add a little more stock, stir until no lumps are visible, and continue until you have used all the stock. When more stock has been added to the roux, you can also add more stock to it in one go. But keep stirring until the soup is smooth and starts to boil again before adding the next batch. The soup can be prepared in advance up to this point.
3 – Because the soup must not boil anymore when cream and yolk are added, this is done just before serving. Heat the soup until it  is almost boiling (if you have made soup so fare in advance that is cooled). Stir the cream with the egg yolk. Add one spoon hot soup, stir or whisk well, add another spoon, stir or whisk, and so on. If you do this too quickly, the mixture will curdle in stead of emulsifying with the soup. When the mixture is about the same temperature as the soup, stir it in. Temper the heat and warm for another five minutes without boiling, while you keep stirring.

Use preheated soup plates or bowls. You can add the diced white chicken meat to the individual serving dishes, or have added them already in the pan.

In Dutch industrial versions of Koninginnesoep or Queen’s Soup there are always garden peas and little cubes of carrots. I have not found these additions in twentieth century-cookbooks, but as a reflection of the original seventeenth-century garnish (pistacchio’s and pomegranate seeds) it is a nice find. Use frozen peas (thawed) and diced carrot, 100 gram (3.5 oz.) of each and cooked for a couple of minutes.

A bundle of aromatic herbs, that is added to stock or stew. They are removed before serving the dish. The usual combination is parsley, thyme and bayleaf, but other herbs can also be used, like rosemary, sage or chervil. The term bouquet (without the garni) is already used by François La Varenne in 1651 in his stock recipe (Le Cuisinier François, II), but except for cloves he doesn’t specify the herbs. However, in the second edition he mentions parsley, chives and thyme. Pierre de Lune (Le cuisinier) also uses the bouquet in 1656, but he calls it a paquet, consisting of thyme, chervil, parsley and clove, and a piece of lard when the dish was to be served on a meat day.