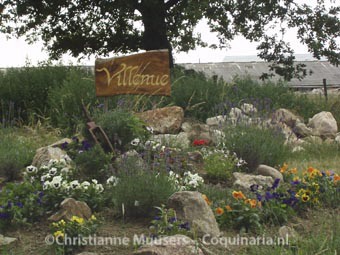 On these pages I describe how we learned to make delicious fresh goat’s cheese, and Gouda-type cheese made of the milk of cows and goats in France during the summer of 2002. The links to the related pages are top right of this page.

Villenue is a biological farm in the middle of France, some fifteen kilometers to the Northeast of Montluçon. The farm has mainly goats, but there are also some cows (for their own use), pigs (which thrive on whey, a ‘waste product’ from making cheese), horses, and chickens. The farmers grow their own wheat, barley and lupine, which are used as fodder for the animals.
The farm is owned by some very nice Dutch people who work very hard. They care for the welfare of their animals, and are proud of the products of the farm.
Edit: It seems that the family has moved on since 2002, I have no idea whether the farm is still run in the same way, or even if the family has moved their business elsewhere. 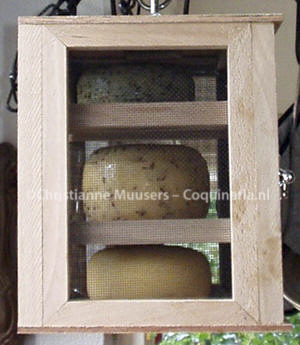 It is easy to make cheese at home. Expensive gear is not necessary, all that is needed are some cheese-forms and a cutter for the curd. Fresh cheese can already be eaten one day after the production. When making Gouda cheese, it will take a couple of weeks after curing and pressing to let the cheese ripen before it can be tasted. For old Gouda cheese it will take even several months (or longer).

The most important issue for succesful cheese-making is working cleanly and accurately. And for the maturing of the Gouda cheese it is essential to have a well ventilated spot.

Gouda cheese is a pressed, compact cheese, so a cheese press is needed. It is not difficult to make a cheese press from pieces of timber laying around in the shed, but the simplest press is two buckets: place the cheese mould in the first bucket on top of a small plate to prevent the cheese resting in the pressed liquids, the other bucket is placed on top of the mould and filled with several pints of water. Do not fill the bucket to the rim, the cheese will then be crushed rather than pressed.
For those who are interested in making cheese at home: the Dutch Cheese Moulds Shop has al kinds of cheese moulds that can be ordered online.

Cheese can be made with raw or pasteurized milk. Pasteurized cheeses tend to be more uniform in taste and less fascinating to the taste buds than cheeses made from raw milk. Although raw milk and cheese from raw milk is generally not prohibited, the production  is controlled by so many rules and regulations that small cheese farms have great difficulty meeting these demands. Knowledge and experience of centuries are just dissappearing because one farmer after the other ceases making cheese on a small scale. The regulation by the EC is only advantageous to big companies that can make the necessary investments, and care more about profit than taste. See also this article on Wikipedia about Raw milk, on fear of the listeria bactery. It would be wiser to let consumers take their own responsibility, and decide whether or not they want to eat unpasteurized cheese or mayonnaise made with raw egg yolks.

Is all this regulation really necessary? Well, there is indeed a (slight) possibility of the Listeria bacterium hiding in raw milk and soft cheeses made of raw milk. Cheeses of the Gouda-type, even when made from raw milk, never contain Listeria. If you are pregnant, very old, young or have a weakened immune system, it is wise to avoid raw milk and soft cheeses made from raw milk. The Wikipedia article on Listeria states that this bacterium can also be found in raw and smoked fish, uncooked vegetables and ice cream. Yet we eat sushi, smoked salmon, ice cream and green salads. So why not cheese from raw milk?

A historical recipe with cheese as main ingredient: Crostini with cheese – An Italian antipasto from the sixteenth century