Preparing dough is a question of touching and feeling. Basic ingredients are flour, water and salt. Eggs, butter and shortening can also be used, and instead of water other liquids can be added, like white wine. The recipes here are mostly based on wheat flour and meal. It is of course possible to use other grains, feel free to experiment, as long as the wheat contains enough gluten.

Recipes give certain amounts. You should start with these amounts, but, depending on a variety of circumstances such as the freshness of the flour you use, the size of the eggs, et cetera, your dough can end up either too moist or too dry. Add little amounts of flour (when too moist) or water (when too dry) and keep kneading until you like what you feel and see.

Even though the food processor is a fantastic appliance, you should finish kneading the dough with your hands. That way you’ll know the consistency of the dough, and, to be honest, kneading dough is one of the most satisfactory things you can do with your hands.

In most instances dough should rest for a while before using it.
If you add two to four tablespoons of sugar, the dough can be used for sweet pastry.
You can also add spices to dough, but these should not interfere with the taste of the stuffing.

Modern recipes always give the amounts of the ingredients that are used. Begin preparing the dough with the mentioned amounts. Depending on several factors, like the freshness of the flour or how large the eggs are, the dough can be too wet (the dough is sticky) or too dry (the dough is crumbly). In those cases, add either a little water or some flour and continue kneading until the dough feels good. 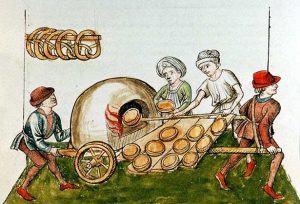 The basic recipes on this page do not mention oven temperatures or how long a dish has to bake. How long a preparation has to bake can be found at the recipes in which the dough is used. A small pie needs less time than a large pie, for example, even when using the same dough.
Oven temperatures are also variable. For instance, I have two ovens, and they need a different setting for baking the same dish. One oven has to be set 10 °C/50 F° lower than the other one to get the same result. In general, dough with yeast needs a higher temperature then shortcrust. Always study the recipe but, more importantly, trust your own experience and ovens.

When not all the dough is used, it can be frozen. For the best result, roll it out into a sheet of about ½ cm/¼” thick. Wrap it in freezer wrap and freeze it laying on a flat surface. If the sheet of dough is too large, simply cut it in two or more smaller sheets. Wrap them seperately and freeze them seperately, only then stack them together. When the dough is frozen, wrap it in an extra layer of freezer foil, and put a sticker on it with information on what kind of dough it is. If one would freeze a lump of dough, it would take too long to thaw completely.

Medieval dough with oil for Lent

Pasta dough from the 16th century 1

Pasta dough from the 16th century 2

Puff pastry from the 17th century

Pie dough from the 17th century 1

Pie dough from the 17th century 2

Puff pastry from the 18th century