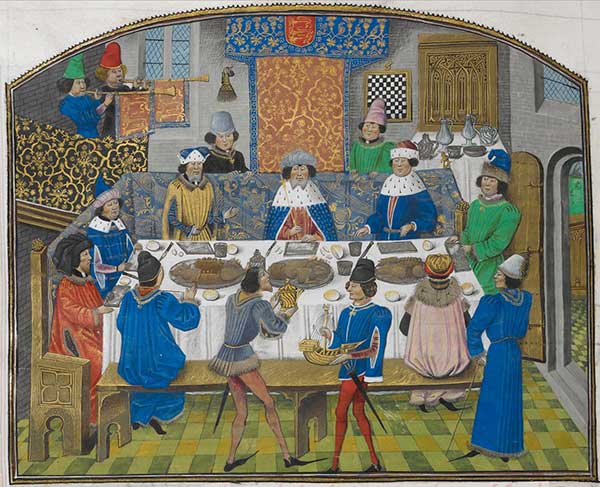 Not so many decades ago, English cuisine stood for bland taste: glassy potatoes, boiled lamb and peas as large and hard as marbles. However, in the Late Middle Ages the English had one of the most interesting cuisines of Europe. Perhaps this was due to the contacts between the regions the Normans who had conquered: not only the British Isle, but also Sicily and Southern Italy. Especially in Sicily there is a flourishing exchange of culture between Normans, Byzantines and Arabs (see Wikipedia on this). For example, in various medieval English cookbooks there is a large pie with the exciting name ‘Turk’s head’, which originates from an Arabic dish called ‘Monkey’s head’. The recipe for that pie can also be found on Coquinaria.

The image above shows the reception of the Duke of Gloucester, York and Ireland by King Richard II in 1387. The miniature itself is a century younger and comes from Jehan de Wavrin, Anciennes et nouvelles chroniques d’Angleterre, ca 1470-1480, BL Royal ms 14 E IV. The French title is not a mistake, that is the language the manuscript was written in.

From the English royal court 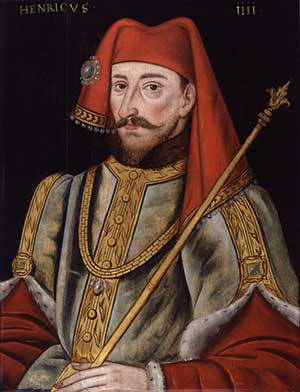 The small pies on this page are called chawettys. The recipe is derived from a manuscript from the first half of the fifteenth century (B.M. Harleian, 279, edition Austin and edition Renfrow, see bibliography). There are four other recipes for chawettys, and there are also two recipes from the Forme of cury, a cookbook from the end of the fourteenth century (see bibliography). By the way, cury does not mean ‘curry’, but ‘cooking’.

The two cookbooks – the Forme of cury and the untitled manuscript Harleian 279 – are both connected to the English royal court. The oldest cookbook was originally written around 1390 by “King Richard II’s chefs.” The slightly newer cookbook Harleian ms. 279 includes the coronation menu of King Henry IV, who deposed his cousin Richard II in 1399. The menu of the wedding party of Henry IV with Johanna van Navarra in 1403 is also included. The meal consisted of three courses. In the first course, the newlyweds and their guests were presented with pheasants, fat capons, swans, cold meat jellies, a sweet dish, and also with chawettys. Which of the five recipes from the cookbook was prepared, is not specified, but the version below is decorative and very tasty.

The period in which the cookbooks were written down was a turbulent one. If you want to get in the spirit of the times, try reading William Shakespeare’s plays: Richard II (1595), Henry IV Part I (1597), and Henry IV Part II (1598).

Green in medieval recipes usually means ‘fresh’: green meat is fresh, uncured meat, green cheese is fresh or soft cheese. But in the manuscript where this recipe comes from, fresh cheese is always called ‘croddys’ (curd). According to the American food historian Cindy Renfrow in this case literally green cheese, or blue cheese, is meant (Take a thousand eggs or more, 1998). I have chosen Stilton cheese for the recipe. The current Stilton is actually dating back to the eighteenth century, but blue cheeses were certainly already produced in the fourteenth and fifteenth centuries. If you do not like strong-tasting blue-cheese cheese, you can simply interpret the green cheese from the recipe as fresh cheese.

The recipe below is from Harleian ms. 279, the chapter for “Dyed Bake Metis” (various baked dishes). The text is cited from edition of Cindy Renfrow (see bibliography).

Meat was often cooked twice in the Middle Ages, but in this version the meat is only baked in the oven. The dough is not specified in the recipe. I have used a dough made with lard, but feel free to use another dough. Although it would be nice it was not ready-bought.
For 6 small pies; preparation in advance 15 minutes.; preparation 45 minutes. 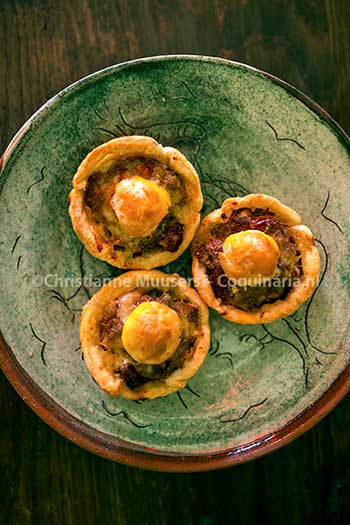 Put the chopped pork in the blender with three raw egg yolks, make into a paste. If the mixture is too stiff, add one or two extra yolks. Chop the dates and crumble the cheese, and add to the meat together with ginger and cinnamon. Boil three eggs for six minutes, submerge in cold water and peel them. Gently remove the yolks from the egg whites and cut them in half. 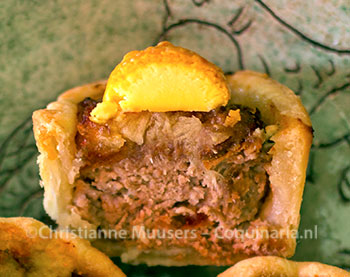 Preheat the oven to 200 ͦC/390 °F. Grease a form for six muffins with some butter. Sprinkle some flour on the worktop. Add the dough and sprinkle some more flour over it. Roll out the dough and cut out discs of about 12 cm diameter. What is left can be rolled out again, until there are six discs. Cover each muffin cavity with a disc of dough and press it well into the cavity. Divide the filling over the six dough cups and pack it tightly. Place a halved hard boiled egg yolk on top of each pie. Bake the pies for 20 minutes in the middle of the oven. Then take it out and let it cool for five minutes before removing the pies from their moulds. Serve the pies hot or cold as a starter.

Serve the pies hot or cold as a starter, or as part of a (medieval) buffet. They are also tasty as a lunch dish, with lettuce.