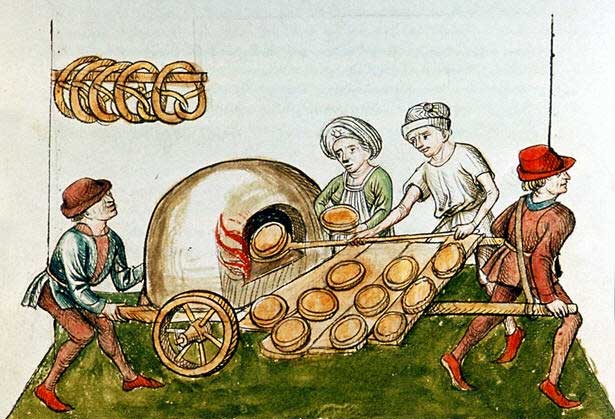 The recipe for this pie with Brie cheese, pear and egg dates from the middle of the sixteenth century. The source is the Nyeuwen Coockboeck (‘New cookbook’) by the Antwerp physician Gheeraert Vorselman. Although the stuffing is prepared with pears and sugar, this is not a sweet pie. In those days, sugar was still considered a spice rather than a sweetener. In the previous recipe in the cookbook, for a pie with chopped beef and Brie cheese, sugar is listed in the same manner as ginger, cinnamon and cubeb pepper. The version with pears and eggs was probably meant for the days on which Catholics were not supposed to eat meat.

On the use of ovens

Baking bread, pies and pasties nowadays is different from what it used to be before the heat of the furnace or hearth (and later gas and electricity) was used to heat ovens directly from the outside. Until at least the early nineteenth century ovens were heated from within by simply laying a fire in them. When the oven reached the right temperature, the fire was raked out. Bread was baked first, and then, in the slowly cooling oven, pasties, pies and smaller dishes were baked. A different technique was laying the fire in a separate compartment which allowed the oven to remain at a higher temperature for a longer period of time, but this also needed a draught to guide the heat from the fire around the dishes in the oven. Experience was needed to make sure the oven chamber was evenly heated without cold or hot spots. The shape of the oven chamber was maybe even more important for an equal spreading of the heat. In the fascinating book The Bread Builders

by Daniel Wing and Alan Scott about baking bread in wood-fuelled ovens (and more…) the second part consists of the history, technique and construction of masonry ovens, and how to use them.

Large farms, institutions and households had their own ovens, but shared use of common ovens also occurred, especially in feudal France where people were obligated to use the four banal. The seigneur demanded a fee for this, just as he did for the obligatory use of his mill and press. But there were alternatives to using a full-blown oven. You could place a dish with dough or a pie in the hearth and cover it with a cloche with coals heaped against it. Later there was the Toertpanne, a pan with a raised rim around the cover. This pan was also  placed on hot coals, and hot coals were heaped on the cover (see the recipe from 1797 for Lamb chops pasty). On the right is such a toertpanne, in a detail from the cover of the Nieuw Burger Keukenboek (‘New Citizen Cookbook’, 1827). Coals are smouldering in a tray, the pan placed on top, and more coals heaped on the cover so the heat comes from above as well as below. People from North America may recognize the Dutch oven, symbol of several states in the USA.

Another possibility was the portable oven. Although, portable … The heavy construction was lugged around on a car. On the picture there is such a portable oven, from a manuscript in the Austrian National Library (ÖNB 3044, ca 1465-1475, fol.48v).

Cheese pie according to Vorselman

This is a savoury pie that can be eaten as a first course or with a salad as a vegetarian lunch. You can even serve it as dessert. The recipe for this pie is from Eenen nyeuwen coock boeck (‘A new cook book’), printed in 1556. The author is the physician Gheraert Vorselman, who used several sources for his book, like De honeste voluptate et valetudine of Platina (3rd quarter 15th century), the Notabel boecxken van cokeryen (1514), and (a version of) the first part of the convolute from Gent KANTL 15 (late 15th century). The source of this particular recipe, however, is still unknown. But since Brie is a cheese from France, it stands to reason that the source is a French cookery book.
The recipe for cheese pie is the second one in Chapter XIV, “Van gebac” (‘of baked goods’), and follows on a recipe for vleestaerte (meat pie), also with Brie. Other recipes in this chapter are for pasties with marrow or fish, and even a later version of the Fake Fish that is described elsewhere on this site. But pretty soon the chapter seems a random collection of recipes for preserving fruit, Roman (catholic) recipes which often contain ground almonds and are meant for Lent, and recipes with eggs. See also the recipes for Parsnip Salad, Verjuice and Medieval bread.

Confusion due to a lack of comma’s

In the original text (as presented in the edition of Cockx-Indestege) punctuation marks are scarce. That was usual in those days, and most of the time the meaning is clear enough. But sometimes not. Like here: “kese van Brij ende harde eyeren tsamen gestooten met peren” (“Cheese of Brie and hard eggs mashed together with pears”). Are the pears mashed with cheese and eggs, or are mashed cheese and eggs added to whole pears? Or is it the Brie that remains whole and are the eggs and pears to be put in the mortar? For my adaption I finally chose not to mash anything but crumble the cheese and cut eggs and pears in larger pieces. Another possibility is mash everything, which is also tasty but with a very different structure. 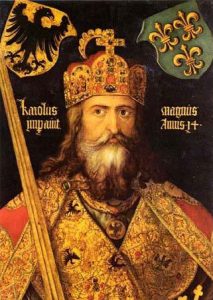 What I liked about this recipe is the use of the French cheese Brie, “kese van Brij”. This is very well possible in a recipe from the sixteenth century, because Brie was already known during the reign of Charlemagne. And remarkably enough, Brie was probably the favourite cheese of Charlemagne! This can be concluded from the description in the biography that was written by Notker Balbulus in 883/884. This is the story:

Charlemagne was visiting an unidentified bishop in an unknown region. It was on a Friday, a fish day. But the bishop did not have enough fish to serve, so he presented the emperor with a delicious, creamy cheese. Charlemagne cuts off the rind, because he thinks that is not fit to be eaten. Then the bishop, who was standing behind the emperor as a servant, steps forward and says: “Why do you do that, my lord emperor? You are discarding the best part of the cheese!” And Charlemagne very slowly ate a small morsel of the cheese rind and swallowed it like it was butter. “You speak the truth, good host!” says he, and he orders an annual delivery of two cartloads of the cheese to Aix. Thus happens for two years, but the third year the bishop himself arrived with the cheese, to explain to the emperor that they themselves were now completely deprived of cheese. So Charlemagne arranged that the bishopric received more land, so they could produce more cheese.

Roquefort is another French cheese that claims to be Charlemagne’s favourite. But the text says clearly that the cheese had a crust, and Roquefort does not have one. So it was probably Brie. (More on Brie)

The source of the recipe is Eenen nyeuwen coock boeck (A new cookbook), written by Gheeraert Vorselman and published in Antwerp in 1560 (edition Cockx-Indestege p.203, see bibliography).

A cheese pie.
Put in a pie crust some Brie cheese and hardboiled eggs, mashed together, with pears. And to this one takes sugar and whole egg yolks.

Using a cover of dough and serving the cheese pie hot is derived from the recipe that precedes this one in Vorselman’s cookbook.
My daughter preferred the pie with just Brie and pear, without the eggs.
The ‘whole egg yolks’ in the recipe; would they be cooked or raw? When I used raw yolks, the stuffing became too runny, so I opted for more hard-boiled egg yolks.
Vegetarian first course, lunch or side dish for 6 to 8 persons; preparation in advance 20 minutes + preparing the dough; preparation 1 hour. 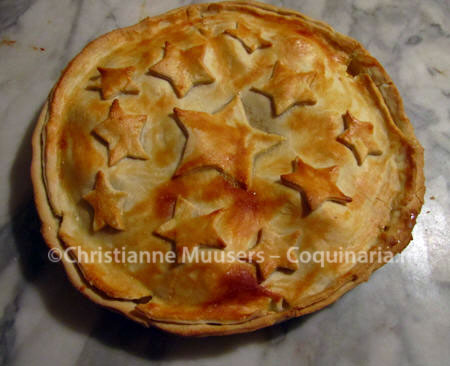 Divide dough in one-third and two-thirds. Keep the smaller portion wrapped in plastic foil to prevent drying. Roll out the larger portion. Dress a buttered pie mould with it.
Peel the pears, remove the core, and cut into slices. Peel the hardboiled eggs, cut into six or eight wedges. Cut the Brie (with the rind!) into small pieces or slices.
Crumble the egg yolks. 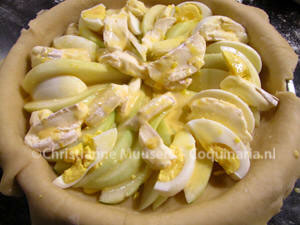 Preheat the oven to 200 °C/390 °F.
Arrange pear, cheese and eggs on the dough. Sprinkle crumbled egg yolks and sugar over it.
Roll out the second portion of dough, and cover the pie. Press the edges together and remove excess dough. This you can roll out again to use as decoration (the stars on the picture above).
Optionally, brush the pie with egg white to glaze it.
Bake the pie in the middle of the oven for forty minutes. Then raise the heat to 220 °C/430 °F and bake for another five to ten minutes. Keep checking that the top doesn’t burn.

The cheese pie is eaten warm. You can serve it in the pie mould, or remove the mould, as you see fit.

Instead of a closed pie, you could cover the stuffing with a dough lattice, or leave the stuffing uncovered. If serving the pie as first course or dessert, it is even better to do this, because otherwise the pie would be too substantial with the extra dough.
Andthis is a very modern version: use pear, fresh goat cheese, honey and walnuts as stuffing. 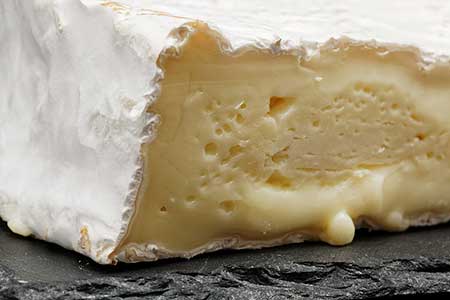 Soft cheese with a crusty white mould, originally made of raw cow milk. It is made in the region East of Paris. Most Brie you can buy today is made from pasteurized milk, to the detriment of the taste of the cheese, but it eliminates listeria bacteria. That is important for pregnant women, because it can cause miscarriage or a very sick baby. However, if you or your guests aren’t expecting, look for unpasteurized Brie. By the way, in unpasteurized Gouda cheese and other hard cheeses there’s no danger of listeria because of the different production process.
Brie has a long history. It was already being produced during the reign of Charlemagne who enjoyed the cheese in 774. In the fifteenth century the cheese inspired Charles, Duke of Orleans (1394-1465) to write a little poem to accompany 240 whole Bries that were send to the same number of ladies at the court: Mon doux coeur, je vous envoie / Soigneusement choisi par moi / Le brie de Meaux délicieux. / Il vous dira que, malheureux, / Par votre absence je languis / Au point d’en perdre l’appétit. / Et c’est pourquoi je vous l ‘envoie. / Quel sacrifice c’est pour moi! (source: Duizend gezichten van zuivel). A famous anecdote is about the Congress in Vienna in 1814/1815, when Talleyrand, to lighten the mood, organized a competition between the attending nations who could produce the best cheese. Brie was the unanimous favourite and received the honorary title roi des fromages, et fromage des rois.

Pie with brie, pears and eggs from the sixteenth century
© Author Christianne Muusers