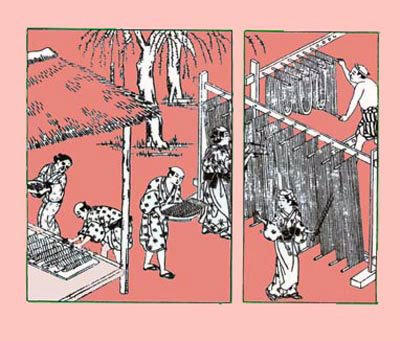 People always think first of Italian pasta at the mention of fresh pasta. But many cuisines have a tradition of fresh noodles, sometimes with different ingredients or cookingtechniques. On this page you can learn to make your own fresh Chinese and Japanese noodles.

The quantities in the recipes are but guidelines: eggs may vary in size, flour can be old (dry). Keep looking and feeling whilst kneading the dough: If the dough stays too moist, add flour. If, on the other hand, the dough is too short (crumbly), add water, a little at a time.

The Japanese probably already ate a kind of noodles in the eight century, sakubei. These were cooked, and served hot in miso soup, or cold in miso sauce. As with many elements from Japanese cuisine and culture, the art of making noodles derived from the Chinese. Japanese noodles (menrui) are not a part of the Japanese meal, they are eaten as snack or fast food.

The colour is white, and they look like thick spaghetti or tagliatelle. For four to eight persons (depending on how the noodles are served) you’ll need 500 gram (4 cup) wheat flour, 1½ tsp salt, about ⅛ liter (½ cup) water and optionally 1 egg yolk. You’ll need less water if you use a yolk.

Somen is made the same as udon, but they are rolled out thinner. Before cutting, the sheets are coated with oil. Somen are usually eatin during summer, when it is hot. The noodles are served in ice water, with garnish and cold soy sauce.

Soba has been eaten since the sixteenth century. They are brownish grey, the colour of buckwheat flour. Quantities for for to eight persons (depending on how the noodles are served): 400 gram (3⅓ cup) buckwheat flour, 100 gram (4/5 cup) ordinary flour, 1½ tsp salt, about ⅛ liter (½ cup) water and optionally 1 egg yolk. You’ll need less water if you use a yolk.
To make chasoba you add 1 or 2 Tbsp green tea to the buckwheat and ordinary flour. The result is a beautiful pastel green pasta. The green tea must be of the best quality, matcha. This is green tea that is used for tea ceremonies. 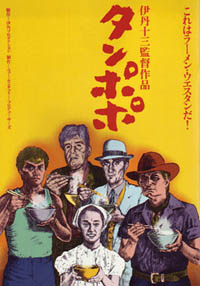 Yes indeed, ramen are a foreign dish in Japan! The Chinese origin betrays itself in the stock that is used for the noodles, with meat or fish instead of dashi. Ramen became popular in Japan after world war 2. First mainly as restaurant food, but since ‘instant noodles’ were invented in 1958, also as convenience food. Everywhere in the world you can find instant noodles in supermarkets. Ramen are also the favourite food of many anime-characters, like Naruto. The famous Japanese comedy Tampopo from 1985 is about a ramen restaurant.

Mixing, kneading and rolling out of noodles

See below, at the instructions for Chinese noodles. The only difference: udon are rolled out less thinly than other noodles.

The noodles are cooked in water, and then served in special noodle soup. So the noodles are not boiled in the soup, just served in it.
Use a pasta pan for boiling the noodles (see below). The Japanese method for boiling pasta is different from the Italian one. Bring water to the boil in the pasta pan. Add noodles, and stir to prevent the noodles from sticking together. As soon as the water boils again, add a cup of cold water. The exterior of the noodles will cool a little, and the noodles, especially the thick udon, will be cooked evenly. Repeat two or three times, and check whether the noodles are al dente. How long the noodles need to cook depends on how thick they are, up to ten minutes. As soon as they are done, take them out of the water and rinse them under the cold tap. Here a real pasta pan proves its worth: you simply lift the perforated insert out of the boiling water (slowly, to prevent the water sloshing over the rim of the pan).
When you want to serve the menrui, bring fresh water to the boil and submerge the noodles (using the insert of the pasta pan) in it for a few seconds. If you prepared the noodles shortly before serving, the original boiling water is still warm enough, just submerge them in that. The only disadvantage of this option is that the soup in which you serve the noodles will be less clear.
The recipe for Japanese noodle soup (not for ramen) can be found here.

Ah, well, with chopsticks. At least, the noodles. You drink the soup straight from the bowl that you picked up with both hands. One thing: whereas other Japanese food is eaten without extra noise, menrui are to be enjoyed with slurping sounds.

In many parts of China wheat instead of rice is the basic food. China is a large country, and rice simply refuses to grow in the climate of the North. Wheat is used in bread, pancakes, and noodles. Many Chinese noodles are made just like Italian ones, only with slightly different ingredients. Chinese rice noodles can be made from rice flour with water, or from cokked and mashed rice and water which is spread out and steamed before cutting.

For four to eight persons (depending on how the noodles are served) you’ll need 350 to 400 gram (a little more or less than 3 cups) flour, with 1/2 tsp salt, and 2 eggs stirred with 135 cc (1/2 cup plus 1 Tbsp) water and a few drops of Chinese sesame oil. Mixing, kneading and roll out the dough is same as with Italian pasta, but I have repeated it here so you don’t have to toggle the pages. 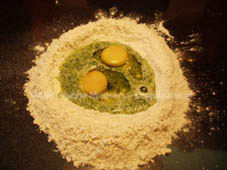 Make a heap of flour on the worktop, with a hole in the middle (like a vulcano). Pour the eggs and water in the hole, and start to mix. Just add some flour of the ‘mountain’ to the ‘lava’ of the eggs, and stir with your finger. Use one hand to mix the dough, use the other hand to keep the eggs from breaking through and running all over the table. You could use a bowl and a spoon or whisk for the mixing, but this way is much more fun. Check the consistency of your dough (not too moist or dry). Clean the worktop, and wash and dry your hands.

Now knead the dough for at least ten minutes. Use both hands, and not just your fingers, but also the ball of your hand. Fold, knead and twist the dough until you get a supple, slightly elastic ball. You can also throw the dough with force unto the worktop to make the dough even more elastic. Just mind you throw it straight downwards and not at an angle, because, being elastic, the dough will bounce straight off the worktop! I love throwing my dough, it is a great way to get rid of all your tension.
Pack the dough in plastic foil and let it rest for thirty minutes. 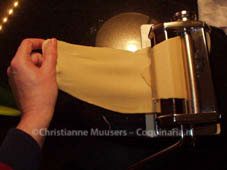 To make thin pasta sheets you can use a wooden, thin roller like a broomstick, but I prefer using a pasta machine: 2 stainless steel adjustable rollers. There are models that come with cutting rollers (correct term?) to cut tagliolini and tagliatelle.
Start with the rollers in their widest position. Take a piece of dough the size of an egg, keep the rest of the dough covered in plastic foil or between to plates. Pass the dough through the rollers. Fold in two or three, pass again, without changing the distance between the two rollers. This is still kneading. Then you start adjusting the rollers by one “knot”, and feed the still thick sheet of dough through. This you do only once before adjusting the rollers again and again, until you have a sheet as thin as you want. But mind: the sheet of dough will only get longer when you pass it through the pastamachine, it will never get any wider. So take care that you start with a piece of dough that is as wide as the rollers are.
Cleaning the pasta machine:When you are done rolling out your dough, wipe the pasta machine clean with some paper towels. NEVER use any water whatsoever, not even a damp cloth! The rollers will loose their smoothness and the dough will stick to them..

Dry pasta before cutting it 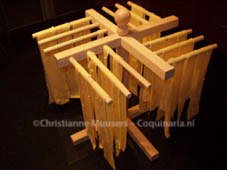 The pastasheets have to dry for fifteen minutes, spread out on a clean kitchen towel. If you want to cut the sheets at once, the strips will stick together.

Guide the sheet through the cutting roll of the pasta machine, or roll the sheets loosely and cut with a sharp knife. Let the pasta rest for at least five more minutes before cooking.
Drying pasta on a “mill” like you see on this picture looks very professional, but it is only functional when yo plan to cook the pasta shortly after. When you want to dry pasta to keep it voor a longer period of time, it is best to let it dry in loosely formed “bird nests” on a tea towel. When tagliatelle dries on a mill you get long, hard sticks that break easily. To dry sheets for lasagna, spread them next to each other on clean kitchen towels. 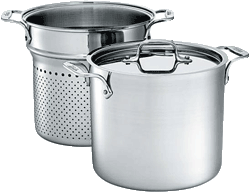 Use ample water, NO salt. Fresh pasta is done pretty quickly. A special pasta pan is ideal for boiling noodles.

How long will pasta keep?

You can keep uncooked pasta a long time without refrigerating (even longer than a month). Just let the pasta dry out well, rolled very loosely. Then keep them in a large bowl without cover in a dry closet. Take care that the pasta is completely dry before placing it in a bowl. If not, the strips will stick together and you end up with a large unpalatable lump.
When pasta is dried for a longer period, it needs to boil longer, up to several minutes. Just test your pasta while it is boiling.