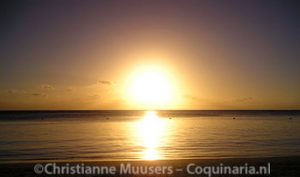 Depending on where you live, temperatures can get very high during summer. Even in the Netherlands there are occasional heatwaves. Some people love to use the barbecue during this wheather. Although I love to use my bbq, I prefer to do that when temperatures are below 25 °C/77 °F. I even use the bbq during winter.

So, the dishes that are tagged with 'heat wave' are mostly cold dishes that can be prepared in advance, for example early in the morning before the day heats up.

I have good memories of this salad. My grandmother (on the right, with me on her lap) prepared it during long vacations during the summer in Maastricht, the Southern-most city of the Netherlands, when it was very hot. My mother also had it on her repertoire as an easy meal during heatwaves. So this is…

END_OF_DOCUMENT_TOKEN_TO_BE_REPLACED

Very refreshing! This is a delicious dish when it is hot. It is a soup, a chlodnik or ‘cold thingy’ according to the cookbook A gift to young housewives (Пода́рок молоды́м хозя́йкам, first published in 1861) from Jelena Molochovjets. According to her, this soup is Polish in origin. The Polish wikipedia defines Chłodnik as any cold soup; the Spanish gazpacho is also a…

END_OF_DOCUMENT_TOKEN_TO_BE_REPLACED

Straight to the recipe This is a recipe with a short introduction, belonging to the series of recipes for the group stage of the WC Soccer 2019 for women. Each day I published a recipe from a country that was playing on that day, and the Netherlands played their first game on Tuesday 11 June….