To part 1 of the history of pasta 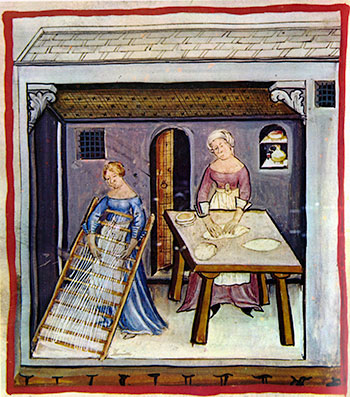 When I published two macaroni recipes from World War I, I also added a page on the recent history of the production of macaronipasta. This page can be considered as the ‘prequel’ of that history section: pasta and macaroni from the Middle Ages to the eighteenth century. Scappi made his hollow macaroni pipes completely by hand. That laborious process is described and illustrated in this recipe. However, the Italians were already looking for ways to improve the production of pasta, and various contraptions for kneading and shaping pasta dough existed long before the industrial revolution. The source for the information presented on this page is the publication by Françoise Sabban and Silvano Serventi, Pasta. The Story of a Universal Food (see bibliography). What I have written here, however, is not the complete story, so for a complete overview, please “Buy the book!”

At the top of this page is shown how pasta was produced on a small scale in an illustration in a manuscript from the end of the fourteenth century: the dough is kneaded by hand, and the long ribbons of cut pasta dough are arranged on a frame to dry. How the long ribbons were made is not depicted here, but fifteenth-century Italian cook Maestro Martino explains it in his cookbook Libro de arte coquinaria (more on this cookbook in the recipe for chicken with blackberry sauce). The thin sheet of dough is wrapped loosely around a roller, then the roller is pulled out, and the roll of dough is cut into thin strips. During the Middle Ages making pasta was often a woman’s job. 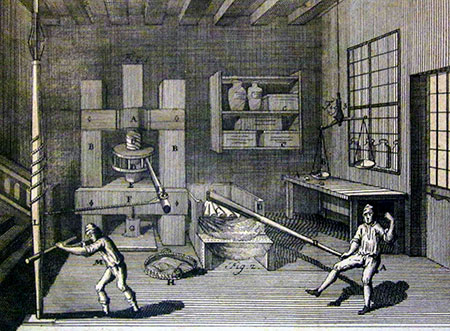 This is a detail from a  print from the Description et détails des arts du meunier, du vermicelier et du boulenger (1767) by M. Malouin. The man on the right is not sitting on a seesaw, but he is actually kneading pasta dough. Because of the leverage off the long lever the dough is worked with great force. This has to be done for at least two hours. It was still quite laborious, but by using this method larger amounts of dough could be kneaded at the same time. This kneading with levers was already used during the Middle Ages by professional pasta manufacturers.  At the end of the eighteenth century a new technique arrived on the scene: a pressing mill, in which two stone wheels circulated in a round trough, thereby kneading the dough. This mill was an adaptation of the olive press. In the second half of the nineteenth century steam presses would take over the hard work.

The man on the left is also working very hard. He is turning the handle of the extrusion press that pushes the dough through sturdy bronze discs. These discs are exchangeable and have holes in different shapes, as shown in the picture below (a detail from the same print in the book by Malouin). Buy using these discs it was even possible for the vermicelier to produce hollow macaroni.

In the video’s I link to on this page, can be seen that the extrusion press basically still works in the same way, except that now it is driven by electricity instead of man power. The letter G indicates the place where the vermicelli is hanging down from the press. When the strips reach a length of about a foot (“la longueur d’environ un pied”) they are cut off close to the extrusion disc. Then the pasta has to dry in phases: first for a short while in the sun, then a night long at a temperature that is at least 15 degrees Celsius cooler, and finally nearly two weeks in a space with controlled temperature and humidity. The pasta makers of the eighteenth century did not have instruments to measure this, they simply used their experience.

Al dente or not al dente? That is the question!