A fifteenth-century recipe from Italy 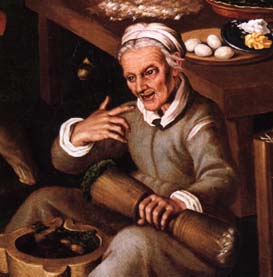 The colour of food is important to the way in which we experience it. Food wich is green, golden, white or red is thought of as tasty food. Food wich looks blue is less attractive. Ingredients wich are blue-coloured by nature are very few. All that comes to mind are some kinds of fruit, like blueberries and brambles (or blackberries), and plums and grapes that have a blue skin. Some fish get a blue layer on their skin when poached in a sour liquid (trout, pike). And other blue food, cheeses like roquefort, stilton or gorgonzola, is actually “off”.

In the recipe below blackberries are the main ingredient in a spectacular sauce that is slightly sour in taste. It is a beautiful accompaniment to succulently poached white meat like breast of chicken, or fricandeau of veal. However: when I made it, the sauce did not turn blue, but a very dark-red purple, due to the acidic ingredient verjuice. The only thing turning blue was the sponge for the washing-up. This is caused by anthocyanin which is present in blackberries. Read more on food that reacts differently in basic and acidic environments with the recipe for red cabbage.

The recipe is taken from the Libro de arte coquinaria by Maestro Martino de Rossi (edition  Scully, see bibliography). Maestro Martino was employed by various illustrious masters: Fransesco Sforza in Milan, the patriarch of Aquileia Ludovico Trevisano, and the grandduke Giacomo Trivulzio. His book, written about 1464/65, was the most influential cookbook in Italy until halfway into the sixteenth century. Since it was so succesful, several manuscripts are still extant. The recipes were used by several writers of later cookbooks, including Bartolomeo Sacchi who knew Martino personally. Sacchi is better known as the humanist Platina. In his book De honeste voluptate (1474, “On honest indulgence and good health”) Platina discourses on the properties of good food. For the practical part of his book he used the recipes of Martino (edition Milham, see bibliography).
In the Netherlands Gerard Vorselman used the book of Platina as one of his sources for his Nyeuwen coock boeck (1560, “New cookbook”, edition Cockx-Indestege, see bibliography). And this is how the recipes of Maestro Martino came to the Netherlands. However, the recipe cited below does not appear in Vorselman’s book.
Another recipe from Martino de Rossi’s cookery book: Mortadella.

How ‘heavenly blue’ the sauce will turn out to be, depends on the acidity or basicity of the dish. The sour verjuice or apple vinegar will result in a purplish red-coloured sauce.
First course or lunch dish for 2 to 4 persons; preparation in advance 10 minuten; preparation 7 minuten. 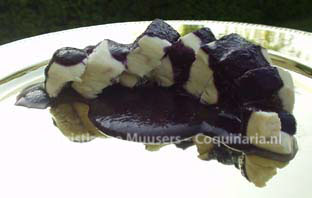 Poach the chicken breast in chicken stock (that you can use again to make soup). Let the meat cool in the stock.

Crush the blackberries in a mortar or use a blender. Stir in almonds and ginger. When you are lucky the liquid will turn dark blue. If not, be happy with a purple sauce. Stir in verjuice or apple vinegar.
Make a puree by forcing the mixture through a sieve. Taste it, and a little sugar.

Cut the cold meat into thin slices, arrange them on a platter. Spoon the sauce over the meat.

Because of the sour taste it is hard to combine this sauce with wine. Enjoy this dish with bread as a special and low-calorie-lunch. Drink water with it.

The juice of sour, unripe grapes. You can still buy it, but you may have to look for it. In the Netherlands verjuice was also made from unripe apples and sorrel. You can use apple cider vinegar as a substitute. More about verjuice and a recipe to make your own verjuice.