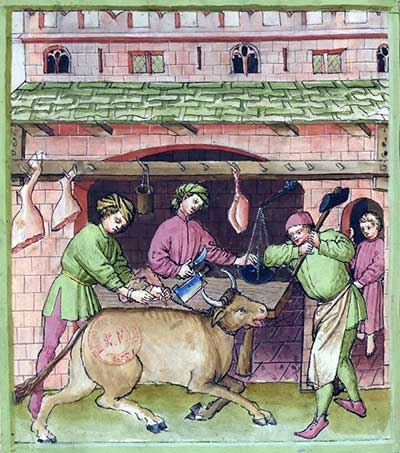 Modern Mortadella is an Italian sausage originating from Bologna, with pink meat, speckled with little chunks of porkfat, peppercorns and pistacchios and/or olives. The sausage is cooked and lightly smoked. The pinkish hue is caused by saltpetre. Mortadella is imitated a lot throughout the world. The American imitation is called baloney or boloney. Baloney also means nonsense (or bullshit for the less civilized), something which makes me doubt the quality of this imitation Mortadella.

The meaning of Mortadella is unclear. According to some the name is derived from myrtle (Italian: mortella) which was used as a spice in the sausage, others maintain that Mortadella is connected to the mortar (Italian: mortaio) in which the meat was pounded.

Whatever the origins of the name, fact is that when the guild of sausage-makers was founded in Bologna in 1376, Mortadella was already known. According to my Dutch Larousse Gastronomique the oldest recipe for Mortadella is from Platina , but he had used the slightly older cookbook of his good friend Martino de Rossi, the Libro de cucina (1464/65, see bibliography).

In a modern Italian menu Mortadella is served as part of affettato, a dish of several sliced hams and pork sausages. Affettato is served as antipasto to the noon meal.

The original recipe is from the Libro de Arte Coquinaria by Martino de Rossi, cited from the online text of this cookbook, based on the edition of Emilio Faccioli from 1966, but without introducion and notes. Another recipe from this cookbook on Coquinaria is Blue summer sauce for white chicken meat.

As you can see, this Mortadella-recipe is quite different from what is sold in the shops today. There are no dices of pork fat, nor is this a big fat sausage. All you get is egg-shaped meatballs, that aren’t even cooked or smoked, just roasted. I suppose this Mortadella couldn’t be kept as long as dried or smoked sausages, but they really are called Mortadella. In my adaptation I have chosen to add some cubes of pork fat anyway, and add a little saltpetre.

Neither Martino or Platina mention any drying or smoking in this recipe. This could just mean that mention of it was omitted, but in the following recipes for cervellate/farcimina and salsicce/Lucanicae the recipes do contain directions for drying and smoking. That is why I think that the Mortadella of Martino and Platina was a kind of crépinette or fresh sausage.

If you want to dry the sausages anyway, I have some tips from my Dutch handbook for butchers. The drying room or closet must have a temperature of 15 °C (60 °F), and a relative humidity of 85%, with good circulation of the air (but not a draught). If the humidity is too high, the sausage won’t dry well. But when the humidity is too low, the skin of the sausage will become too hard and prevent moisture escaping from the sausage. Drying is a process from within, that is why the skin must remain porous.
For circa 800 gram/1.75 pound sausages; preparation in advance 20 minutes + a few hours rest; preparation 1 hour + cooling. 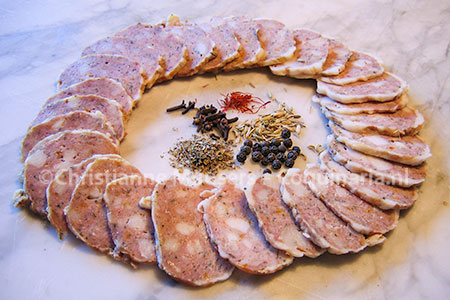 Grind the veal with the pork fat. All the rest (except for the pork caul, diced pork fat and fennel seeds). Use a cutter or blender to grind the meat even finer. Then add the diced pork fat and fennel seeds. Let the farce rest for a couple of hours.
Pat the pork caul dry, cut in squares of about 20×20 centimeters. Cut away fat veins that are too large. Form balls the size of an egg with your hands, and wrap these in the pieces of pork caul. I also made some longer, sausage-like rolls, because they are easier to slice.

Put the balls on a spit, or on a gridiron, and roast them at a moderate temperature (120 °C/248 °F) for 50 to 60 minutes. You can check the core temperature to be sure the Mortadella is done with a meat probe. The temperature should be 70 °C/158 °F. At this temperature all bacteria are gone, and the meat is done.
Let the sausages cool. If there are thick fat veins left that have not melted away, cut them away.

Cold or at room temperature, in thin slices as antipasto, or on a sandwich.
When you have added saltpetre the sausages will keep for five days in the refrigerator.

This is the temperature at the core, the centre, of a piece of meat during cooking. That temperature is different for different kinds of meat. Roast beef for example is ready when the core has reached a temperature of 50 °C/122 °F when served saignant, and 55 °C/131 °F when served bien cuit. For pork and poultry that must be well done, the core temperature must be between 70 and 75 °C (158-167 °F). Veal and lamb are in between, at 62 to 65 °C/144 to 149 °F. Most meat thermometers are sold with a table with the right temperatures.
A meat thermometer can be bought for less than ten dollars, and some electrical ovens have build-in meat thermometers. They are quite handy when preparing large pieces of meat, it would be shame if it turned out under-cooked or over-cooked. If the meat still has a bone in it, take care that the thermometer does not measure too close to the bone because that will have a higher temperature than the surrounding meat.

What I have used is a mixture that you can buy at Dutch butcher’s shops of salt, sugar and saltpetre (in a ratio of 100:2:1) In Dutch it is called pekelzout (literally brine salt). You must be careful with it, too high a dose can cause nausea and diarrhoea. Why would one use such a poisonous substance instead of ordinary salt? Saltpetre permeates the meat completely. A ham would look very unappetizingly grey if no saltpetre or nitrate was used in curing. Moreover saltpetre prevents anaerobic bacteria (bactaria that don’t need oxygen to multiply). The food industry used saltpetre or nitrate a lot, but its use is not new, saltpetre was already in use in prehistoric times. But BE CAREFUL when you use it, or use plain salt instead.
And to conclude this short description of saltpetre: it is also a component of gunpowder (that is why you can’t easlily buy pure saltpetre), and was thought to be an anaphrodisiac (but that is not true).

The French call this crépine. The caul is the part of the peritoneum attached to the stomach and to the colon and covering the intestines. You can buy it deep-frozen. To thaw a caul, put it in cold water with salt that you change once in a while. When the caul is completely thawed, you can spread it out, and see a thin membrane with veins of fat. It reminds me a bit of lace, rather attractive, actually.
Why would one use a caul in the kitchen? Because it is so thin and the fat melts away in the preparation, it is ideal to wrap food in that would otherwise fall apart. And the melting fat serves as a kind of ‘instant dripping’. Use what you need of the caul, but not more. Do not wrap the caul six times around your meat because otherwise you have to throw it away, the dish won’t taste any better, on the contrary. A caul is cheap, you won’t go broke if you do not use it all.