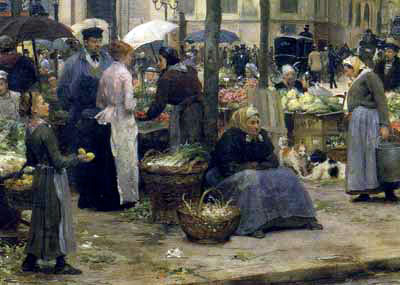 A delicate herald of Spring

The text for this recipe is from a cookbook from the nineteenth century, but in fact the recipe is older. In Le cuisinier from Pierre de Lune (1656) there is a ‘potage the santé’ with sorrel, purslane, chervil and herbs, and no doubt there are other comparable recipes.

Two versions. Which one is the original?

When I decided on this recipe I found it in two of my nineteenth century cookbooks, De hedendaagsche kookkunst (‘The contemporary art of cooking’) by Maria Haezebroek and the Keukenboek (litt. ‘kitchenbook’) by Henriëtte Davidis in practically the same version.
Which of these books had the recipe first?

The printing history of De hedendaagsche kookkunst shows that from the first edition in 1848 this cookbook has been revised and augmented several times, growing from 155 pages to 384 pages in the ninth edition from 1892, which is the one I own. The last edition of the cookbook was the tenth, from 1901.
The Keukenboek was a free adaptation from the eleventh edition of the German Praktisches Kochbuch from 1865. This also had been revised and augmented several times since it was first printed in 1844. I own the second edition of the Dutch adaptation from 1868.

It appears that the recipe from the Keukenboek of Davidis is the oldest. It was translated from the German original, where it first appeared in the tenth edition from 1864. In De hedendaagsche kookkunst the recipe for this soup appeared for the first time in the sixth edition from 1880 (thanks to Joop Witteveen for providing me with this information).
I have chosen to represent the oldest Dutch version, which is the one from the Keukenboek  from Henriete Davidis.

Henriëtte Davidis (1801-1876) was a well-known writer of cookbooks in nineteenth-century Germany. Her mother was of Dutch origin, her father was a clergyman. Some of the other cookbooks she wrote are: Puppenköchin Anna. Ein praktisches Kochbuch für kleine, liebe Mädchen (1856) (Doll-cook Anna. A practical cookbook for sweet little girls) and Die Hausfrau: Praktische Anleitung zur selbständigen und sparsamen Führer des Haushaltes (How to be an independent and economical housewife). These books were also translated in Dutch.
Her books were also important for the American cooking tradition in the Mid West, many emigrated Germans entered the new country with their own volume of the Praktisches Kochbuch. In 1897 an American edition was published, entitled Henriette Davidis Practical Cook Book (see Bibliography).
In the city of Wetter near Dortmund there is Henriette Davidis Museum. Another recipe from the Keukenboek is Capon à la braise with caper sauce. By the way, the soup in the picture on this page (in Dutch) is also from the Keukenboek, a curry soup with meatballs of veal and hard-boiled egg yolks.

My knowledge of Maria Haezebroek is very limited. All I know is that she has published one cookbook,  De hedendaagsche kookkunst, of de wetenschap om lekker en goedkoop te eten en te drinken. […], (‘The contemporary art of cooking, or the science of eating and drinking well and cheap’) that first appeared in print in 1848 and remained in print until 1901, when it had grown to more than double its original size.
My copy of the Hedendaagsche kookkunst (ninth edition) is not just a cookbook. There is information on kitchenware and appliances, laying the table, how to make your own cleaners and shoe polish, and a rather lugubrious chapter on how to treat people who are apparently dead, methodically divided into asphyxia by carbon monoxide, drowning, hanging and being overcome by cold. The preceding chapter is on various symptoms of poisoning and antidotes. Not a popular subject in modern cookbooks.

Making stock according to Davidis

The Keukenboek has a lot to say on making stock (pp. 22/23), but I don’t always agree with Davidis (italicized in orange in the text below). How to make a good stock according to my opinion can be found here.
A summary of ‘how to make stock’ by Davidis: Use enamelled or well tinned copper pans, meat that has been slaughtered the previous day, preferably without fat and deboned. Rinse the meat off under running water, beat it with a wooden mallet on the cutting board until it is tender. Put it on the fire with cold water and salt. Bring to the boil, skim it, and let it simmer for an hour. Then strain the stock, rinse the meat, and put strained stock with the meat and vegetables (that will be served as well, not strained out of the stock before serving). The meat can either be served in the soup, or served seperately in the following course, with an ‘eijersaus’ (resembles sauce Hollandaise). If the meat was lean it is best to leave it in the soup. A strong stock is served clear, but if less meat was used one should thicken the soup with rice, pearl barley, vermicelli or sago. A good strong stock required a good quantity of meat, 250 to 350 gram pro person. Even if you served large portions (4 decilitres/nearly 2 cups pro person) that would mean 2 to 3 pounds of meat (no bones) for little over 1.5 litres (6 to 7 cups) soup.

The original recipe from the Keukenboek by Henriëtte Davidis from 1868, respectively pp. 30 and 148 (see bibliography).

The taste of this spring soup depends not only on the greens, but also on the stock that is used. Home-made chicken stockwould be excellent, or a good vegetable stock if you want to make a vegetarian version. No stock cubes, please, the main ingredient of those is salt.
For inexperienced cooks it may be advisable to click on the links in the recipe for how to make roux and thicken stock with raw egg yolks.
For 4 persons; preparation in advance 40 minutes; preparation 30 minutes. 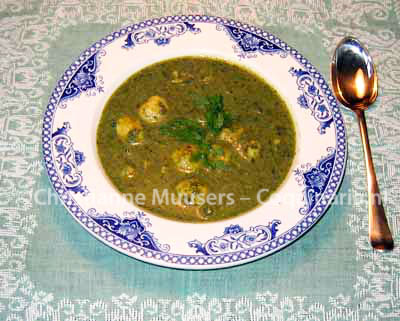 The soup
1 litre (4 cups/2 pints) good stock (whatever your fancy is)
40 gr (3 Tbsp) butter
40 gr (⅓ cup) flour
according to taste and availability 250 to 400 gr (5 to 8 cups) of: butterhead lettuce, spinach, purslane, sorrel and basil
2 Tbsp each of chopped tarragon and chives
some chopped burnet if you can find it
2 egg yolks
2 Tbsp each of chopped parsley and chervil

Make the potato dumplings – Boil the potatoes and mash them when they are still hot. If you are in possession of a potato ricer, this is the moment to use it! You’ll get a smooth purée. As soon as you have puréed the potatoes blend in the butter, egg yolks, bread crumbs and spices. Whisk the egg whites and blend in as well. Form small balls with well-floured hands. Set aside until use.
Was and chop all the greens, but keep parsely and chervil separate.

Melt the butter in a large pan, stir in the flour. Let this sweat for several minutes on very low fire. Now add spinach, purslane, tarragon, chives and burnet and stir until the greens have lost the water and have shrunk. Pour in the stock gradually, keep stirring all the while to ensure that it has thickened. Don’t forget to rake over the bottom of the pan to prevent burning.
Purée the soup in a (hand) blender or a passe-vite. Let simmer for fifteen more minutes, then add the potato balls and simmer for ten more minutes.
Finish the soup with the raw egg yolks (add a litle of the hot soup to the stirred egg yolks, add some more, stirring all the while, then pour the egg yolks with the added soup into the pan, stirring the soup continually until it has thickened enough. The soup must not boil).
Add chopped parsely and chervil just before serving.

Serve at once, using your finest soup tureen!
In addition to the potato dumplings you can add hard boiled egg yolks, or little meatballs made from nothing but ground veal or beef with some pepper, salt, nutmeg and mace. 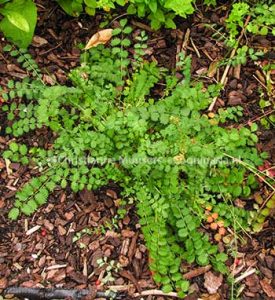 A perennial (Sanguisorba minor) with decorative leaves and sweet little flowers. Indigenous to Europe. The young green leaves are used in salads and cooling drinks, the flowers are very decoratove in salads and to garnish dishes.

This tuber, Solanum tuberosum, originates from South America. When Spanish conquerers entered a vilage from which the inhabitants had fled they found several new food stuff, including potatoes. They first thought mistakenly that the potato was a kind of truffle. Soon after the potato was introduced in Europe, but it wasn’t an immediate succes. The bulbs were bitter, the leaves poisonous. Potatoes did not become popular food on its own merits, the consumption of potatoes was more less forced by governmental decrees and subterfuges. By the end of the eighteenth century potatoes were finally accepted, although still grumbling, by the common people. But then disaster struck: in the nineteenth century there were several disastrous famines caused by failed potato crops. Especially Ireland was victim of these famines, but Belgium and the Netherlands also suffered. One fifth of the Irish population died, and many sought refuge elsewhere: the United States of America.
The famous painting The potato eaters by the Dutch painter Vincent van Gogh gives an impression of the monotony and frugality of the meals of the common people in the nineteenth century.

There are several varieties, like the common sorrel (Rumex acetosa) and the French sorrel or oseille (Rumex scutatis). The leaves taste more or less sour, depending on the amount of sunlight (more sun means more sour). Sorrel grows in the wild and chances are that when you have a garden, it will turn up unasked for. Don’t dig it up root and all, just cut of the leaves and use them in the kitchen, in salads or boiled as vegetable. However, do not eat it in great quantities or too frequently, because of the high content of oxalic acid. When sorrel is boiled the colour changes to a greyish green.

Be careful if you ever decide to grow your own tarragon.First of all, often Russian tarragon (Artemisia dracunculus var. inodora) is sold as kitchen herb (at least in the Netherlands), while the term inodora indicates that this plant hardly has any flavour. So be sure to find real French tarragon. Second warning: if your tarragon is happy, it will start to grow rank, sprouting up everywhere. So choose the spot where you want to plant your tarragon carefully.
Dried tarragon has hardly any flavour. If you do not have tarragon in your garden, use frozen tarragon, or ask your green grocer.

A recipe for a delicious spring soup with herbs
This delicate green-coloured soup from the 19th century lets you enkoy the first young herbs and vegetables from your spring garden!
© Author Christianne Muusers