To part two of the history of pasta

It has happened to me before. I start working on a historical recipe that does not seem to be too complicated. But then the questions arise, one after the other … 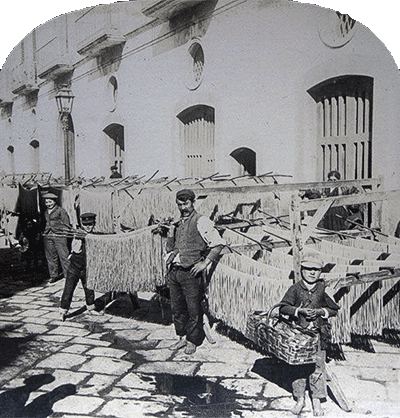 When I was working on two recipes with macaroni  from the First World War that were very much alike. one such a question arose: why should macaroni be broken or cut into smaller pieces? Isn’t macaroni small enough already? Maybe they mean another kind of pasta? Pictures I found online of nineteenth-century macaroni showed that it was indeed a long pasta. At first I thought it was spaghetti, but the pasta is acually hollow. 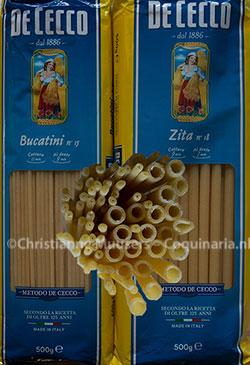 Nowadays, long hollow pasta goes by other names, and is no longer called macaroni. On the right is a picture with long, hollow pasta from a pasta brand that is available in the Netherlands. There are two varieties: thin bucatini and thick zita. I have used bucatini for the Dutch pasta dish, and zita for the allied pasta dish. According to the information on the packaging the thin bucatini need boiling for 9 to 11 minutes, and the thicker zita 7 to 9 minutes. But for zita be able to cook such a short time, they need to be prepared in a pan that is large enough to submerge the pasta straight away. My pasta pan with a content of 5 liters (5¼ quart) was not deep enough for that to happen when using the pasta insert. It took at least five minutes before the pasta was flexible enough to submerge the stalks entirely. Without the insert, the pan was just deep enough.

Al dente? Not quite!

According to the Dutch recipe in the wartime cookbook, the pasta must boil for thirty minutes.That raised the following question: since did the Italians start eating their pasta al dente? And, of course: is it at all possible to boil pasta for thirty minutes? Take a look at the recipe for macaroni with tomatoes from 1918 and the last question will be answered: yes. Artusi does not provide exact cooking times in his cookbook from 1891, La scienza in cucina e l’arte di mangiar bene. However, in the recipe for Maccheroni alle Bolognese he states “that pasta must be cooked a short time […] When the pasta is still a bit hard it digests better”. So, al dente. And in the same recipe Artusi advises to use durum wheat for the best (dried) pasta.

In sixteenth-century Italian recipes pasta also has to boil for half an hour, like in the Dutch war cookbook. Why did this change to a shorter cooking time? Is al dente a method of preparation that originates from the 18th or 19th century? Unfortunately, my Italian is not good enough to be able to look though a lot of their historical cookbooks to find the answer, but if anyone feeld like finding out, keep me posted! On the following page I looked into the difference in nutritutional values between long and shortly boiled pasta as someone claimed all nutritional values would disappear if the pasta is cooked for too long.

Mechanized production of pasta is older than the industrial revolution. I have decribed the making of pre-industrial pasta on this page. By the end of the nineteenth century the complete process of making pasta was fully mechanized, from tempering the ingredients for the dough, to kneading and shaping, and finally to controlled drying. At home, one rolls out the dough by hand, and then it is cut into the required shape. Industrial pasta is not rolled out, but pressed through holes. In the mouth of the modern pasta press is a perforated disk. The shape of the opening determines the shape of the pasta. Even hollow pipes can be made in this way. The Dutch climate is too humid to efficiently be able to dry pasta, so I limit myself mostly to making fresh pasta. On this youtube film is a small modern pasta maker for household use. On another short youtube film is shown a pasta maker for restaurants and caterers, and on yet another youtube film is shown how industrial pasta is made.

Not all pasta is made with durum wheat, but it is the preferred grain for pasta. Durum wheat or Triticum durum is probably the result of selective crossing from emmer wheat. Durum wheat is more sensitive to lower temperatures, and contains more proteins and slightly more gluten than ordinary wheat. The meal is slightly yellow because the kernel itself is yellow. And because these kernels are quite hard (durum is latin for ‘hard’), the meal is less finely ground and remains a little coarse. Durum wheat is also used for bulgur and couscous.