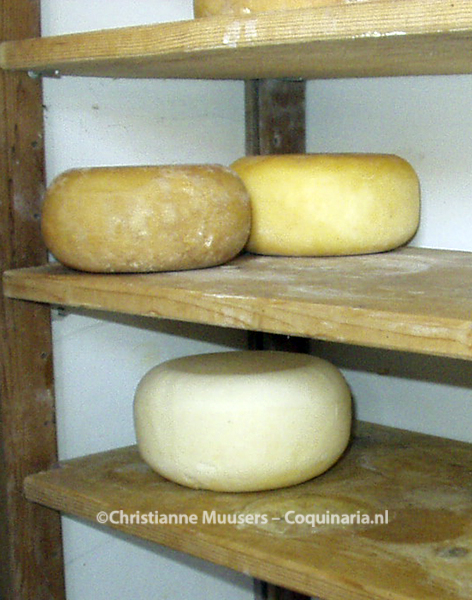 Cheese of the Gouda type is a firm, pressed cheese, cured in brine and matured for at least six weeks. The pictures below  show how Gouda cheese can made at home. Mind you, this is not a course in cheese making, just an impression. If you like this page, please link to it, do not copy without asking permission first. If you have an interesting site or blog on making cheese or (the history of) food in general, let me know and I’ll link back.

How to make Gouda cheese

The milk is heated slightly. Lactid-acid producing bacteria are added, half an hour later rennet is added. When the milk has curdled the curd is cut finely with a harp to the size of peas. The whey is partly removed, hot water is added, and again the whey is partley removed (with cow’s milk this is done twice, with milk of sheep or goats it is done but once). The curd rests for a short while. The curd is then scooped out of the basin and put in cheese moulds which are covered in cheesecloth. The curd is pressed with the hands. The form stands on its top for five minutes. The very young cheese is then carefully removed from the form, and put back in upside down. The cheeses are now pressed more powerfully in a cheese press, first with half weight, and after a couple of hours, when the cheese is again turned, with full weight. The cheese is then taken out of the cheese mould and cured in brine overnight. Again the cheese is flipped over the next morning. The cheese is now ready for the last stage: the maturing. This is done in a not too warm, well-ventilated space. The cheeses are turned daily. After six weeks the cheese is young Gouda cheese. For older cheese, they have to mature longer, several months or even longer than a year.