In many Asian countries people use chopsticks for eating their food. But there are differences, just as in the western world Americans wield knives and forks in a different way as Europeans. I have a small collection of chopsticks and chopstick rests (nothing special, but I enjoy it nonetheless), and thought it would be nice to add a page on these eating utensils. 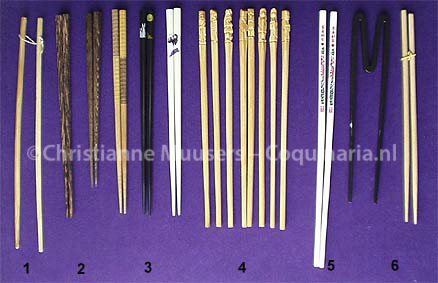 Explanation of the chopsticks in the picture

Chopsticks are simple but brilliant utensils to pick up food and bring it to the mouth, but you can not cut with them. That is why most ingredients in ‘chopstick cuisines’ are cut up into bite-sized chunks. There is no need to use a knife. In the Chinese cuisine a porcelain spoon is provided for eating soups and other food that is difficult to eat with sticks, but the Japanese eat even their soups with chopsticks! The solid ingridients are taken out of the soup with the sticks, the soup itself is drunk straight from the bowl.

Differences between Chinese and japanese chopsticks

First you pick up your sticks. Take them at the holding end with your right hand. Then take them over at the eating end with your left hand. Now you can take them with your right hand in the eating position. The eating position is: lower chopstick fixed with the ringfinger, the upper chopstick is moved and controlled by the index finger. You might think you will never learn it, but be patient: practice makes perfect.
Here is an exercise: Take two small bowls. Fill one with peanuts or peas. Then move them one by one from one bowl to the other, using chopsticks. Young children and people with arthritis may prefer the so called rookie sticks. These sticks are joined together, so that you can use them as a pincher (#6 in the picture above).

These didn’t become popular in Japan until the sixties of the twentieth century, especially in restaurants and on formally laid tables. Until then, chopsticks were placed on the table in long, narrow boxes. The eater would take them out of the box, and at the end of the meal replace them. During the meal the chopsticks rested on the rim of a plate or bowl, but never with the ends in the food.
Once you start buying chopstick rests you won’t be able to stop: there are always new ones (and generally they are not very expensive!). Most chopstick rests are made of porselain, some of wood or other materials, or even paper. They are often figurative: lots of fish, other animals, but also tree leaves, vegetables and objects.

In the picture at the top of this page you see a Chinese serie of chopsticks called The Eight Immortals. They are comparable to Western apostle spoons. From each immortal there is one pair of chopsticks. The eight immortals are Taoist deities. Below you find a very short description of the iconography of each of them (from left to right). The names are spelled according to pinyin. The legend I found in a book my grandfather owned, De tuin der goden (The garden of the gods), from 1947.

The historical background runs from the 7th to the 11th century. The legend got its definitive form around 1200 AD. You can find more on the eight immortals on this site on Taoism. And there is a Chinese film about the Eight Immortals