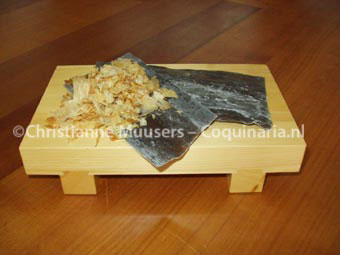 Dashi is the basic stock of Japanese cuisine. It can be prepared in several manners, but mostly dashi is made with seaweed and dried bonito. Below there are several recipes for making dashi. When preparing noodlse, use Japanese noodle bouillon.

The two main variations of dashi are ichiban dashi and niban dashi, otherwise known as dashi I and dashi II. Unlike Western stock, dashi only needs little time to prepare. You just need two ingredients: katsuoboshi (dried and smoked bonito flakes) and kombu (dried seaweed). And water, of course.
Dashi I must always be made fresh, at the most a couple of hours in advance. Dashi II will keep up to three days in the refrigerator, and can be frozen although the flavour will deteriorate. But when making dashi I anyway, it would be a pity not to use the ingredients to make some dashi II. Although I prefer not to use stock cubes, when needing only a tablespon or two of dashi, I use instant dashi-powder. When you are preparing a whole Japanese meal, it is handy to add up all the amounts of dashi you’ll need and make them in one go.
Because dashi is prepared with fish (bonito), this is not a vegetarian stock. Buddhist monks in Japan have invented dashi made with shii-take mushrooms instead of bonito.

On the Dutch division of my site I have published several Japanese recipes. If you are interested, you could use the ‘translate to English’ button in the browser.

What is the difference between dashi I and dashi II?

Dashi I has a subtle favour and is used for elegant, clear soups which are served as one of the first courses in an elaborate menu..
Dashi II is more robust, and is used for sauces and miso soup. Miso (a kind paste of fermented soy beans) has a very recognizable odour and taste (I like it). The triad rice-miso soup-preserved vegetables is the basis of the Japanese meal. In a menu with more courses, this triad is served last, before dessert (if any).
If you only need a few tablespoons of dashi II for a sauce, you can use instant dashi (like Western stock cubes), or your own frozen ice cubes of dashi II.

The Japanese cuisine has several dishes with the so called ‘fifth flavour’. In Western cuisine there is sweet, sour, salt and bitter. But how to describe the taste of truffles? They taste umami. Umami is a Japanese phrase meaning something like bliss, deliciousness. Well-made dashi, whether made with katsuoboshi or shii-take, also exudes umami.

Important when you strain dashi: Use two strainers with a cloth or kitchen paper between them. The cloth or paper won’t be clogged, if you use cloth it will be easier to clean, and most important when you want to re-use kombu and bonito for dashi II: you can easily remove them from the upper strainer.
See my page on chopsticks to find out how to eat your soup with sticks.

Here are five recipes for making dashi. The first one is for delicate soups (Dashi I). Then there are two recipes for Dashi II, the first one uses what is left from making Dashi I, the second recipe is used when no Dashi I is needed. The last two recipes are for vegetarian dashi.

This dashi is the most delicate version, for subtle soups.

Wipe kombu with kitchen paper, put it in a pan. Add water, bring slowly to the boil. Take the kombu out of thewater just before it starts boiling. Add all katsuoboshi, bring the water to the boil once more, then immediately take the pan off the fire. The bonito flakes will swell. After five minutes, stain the dashi through a sieve with a fine-meshed cloth or paper towel.
Do not discard kombu and katsuoboshi, they can be used for making dashi II.

This stock is used in the preparation of other dishes, to stew, to marinate, or in a sauce.

Method a, with leftovers from dashi I:
1.5 liter (6 cups) cold water
kombu and katsuoboshi from making dashi I
10 gr (⅔ cup) extra katsuoboshi

Return kombu and katsuoboshi that you’ve used for making dashi I to the pan. Add cold water, bring to the boil, let simmer until the water has been reduced to 1 litre. Add the second batch of katsuoboshi, take the pan off the fire, strain the dashi II after five minutes through a sieve covered with kitchen paper or cloth.

If no dashi I was prepared, use this method.

Proceed as if making dashi I, but let the dashi simmer for twenty minutes after adding the first batch of katsuoboshi. Then add the second batch, take the pan off the fire, strain the dashi II after five minutes through a sieve covered with kitchen paper or cloth.
This is a good method when you don’t need dasi I. But if you do, please use the recipe below.

True vegetarians can not use dashi from bonito, as that is a fish. This recipe uses mushrooms instead.

Wipe kombu with kitchen paper, put it in a pan. Add water, bring slowly to the boil. Take the kombu out of thewater just before it starts boiling. Add dried shii-take mushrooms, let stand for fifteen minutes. Strain the niban dashi through a sieve covered with kitchen paper or cloth.
The shii-take can be used afterwards in other recipes.

This is just flavoured water. I never use this method. But I do add a piece of kombu to rice when it steeps before boiling.

Wipe kombu with kitchen paper. Put in a bowl with cold water, let stand for a whole night. This dashi is not boiled. 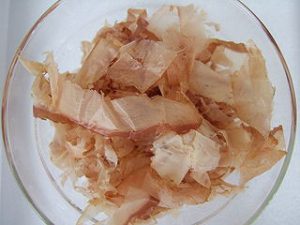 Dried, fermented and smoked bonito tuna. The fish has become rock hard in the proces, and has to be shaved before use with a special instrument resembling a wood plane. Because this is hard work, you can buy katsuobushi shavings in packages. 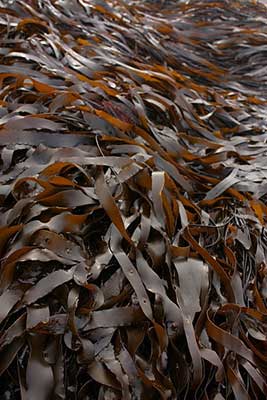 Also named konbu. An edible kelp from several members of the Laminariafamily. The seaweeds grows in leaves that are several metres high, reaching up to the light. When kombu is dried, it forms hard sheets. Never rinse komby, just wipe it clean with a paper towel.

A mushroom that is indigenous to Asia, scientifically known as Lentinus edodes. It grows on decaying wood. Their structure is meaty, and they are very tasty. The stalks are too hard to use, you could use them in soup (but remove the stalks before serving). Shii-take have been cultivated in China since the fourteenth century, in Japan since the seventeenth century. Cultivation took no less than three years. But when it became commercially feasible to cultivate them they are easy to come by.

There are many different kinds and qualities of soy sauce. The fundament is fermented soy beans and wheat meal, and salt. Japanese soy sauce is a thin, clear liquid, ranging from deep red (‘light’) to black in colour.