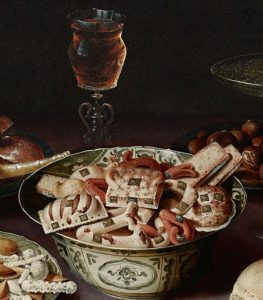 In the Middle Ages, cookies were served during the banquet or the final course of a festive meal, along with fresh or preserved fruit and spiced wine. During the sixteenth century the Italians even started their meals with sweet cookies, according to the menus provided by Bartolomeo Scappi (Opera, 1570, see bibliography). About a hundred years later Bartolomeo Stefani still serves sweet dishes at the start of a meal (Arte di ben cucinare, 1655). An example of the dishes Scappi serves at the beginning of a meal (on April 8): biscotelli made from marzipan, Napolitan mostaccioli, sweetened ricotta, slices ham that were cooked in wine with a sauce from Seville oranges and sugar, and offelle alla Milanese (sweet stuffed pasties).  When the hot drinks coffee, tea and chocolate gain popularity at the end of the seventeenth century, they are often served with cookies. Lavishly decorated cookies can be seen on several Dutch still-life paintings from the seventeenth century. In the picture above, a detail from a still life by Osias Beert (1580-1623), the cookies are served with wine, but the painting is from before the rise of coffee and tea. Hard cookies were dipped in wine or tea before being eaten. 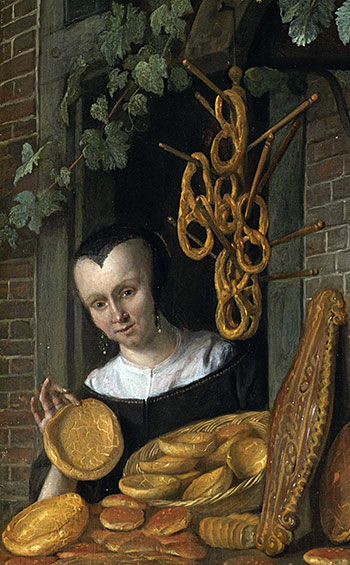 The Dutch word krakeling resembles the English word crackling, but whereas cracklings are crisp fried pork rind (kaantjes in Dutch), a krakeling resembles a pretzel in form, but it is sweet rather than savoury. Nowadays Dutch krakelingen are made from yeast dough or puff pastry, but the Volmaakte Hollandsche keukenmeid (the Perfect Dutch Kitchen Maid) from 1746 offers two recipes with a dough containing almond flour.

The form of the krakeling resembles an 8, which can be a symbol of infinity or eternity (∞). In some parts of the Netherlands they are served traditionally at funerals. In Scandinavian countries they are associated with Christmas, the cookies are called kringle (Danish and Norwegian) or kringla (Swedish). Santa Claus is even named after the cookie: Kris Kringle. A simpler kind of crackling can be seen in the Portrait of a baker and his wife by Jan Steen from 1658.

Cracklings with almonds and aniseed that are excellent, how to bake them

Take a pound peeled almonds with a half pound powdered and sifted loaf sugar. Steep a handful of gum tragacanth, and take the white of an egg. Beat this together into a froth and add some coriander seed and half a spoon aniseed. Knead everything well together, and make from the dough cracklings, the size you want them to be after the dough has become tough and thick enough. Then take a [sheet of] paper, grease it with almond oil, and bake the cracklings on it in the oven. Is very good.

These cookies can be eaten by people who are allergic to gluten. And if the egg whites are replaced by aquafaba, the cookies can even fit in a vegan diet. However, I do not have any experience with this ingredient. Since the dough does not contain any gluten, gum tragacanth is added to prevent the dough from falling apart. On the picture below there are some comfits (sugared spices) between the cracklings.
Makes 25 almond cracklings; preparation in advance 15 minutes + at least 1 hour in the refrigerator; preparation 35 minutes. 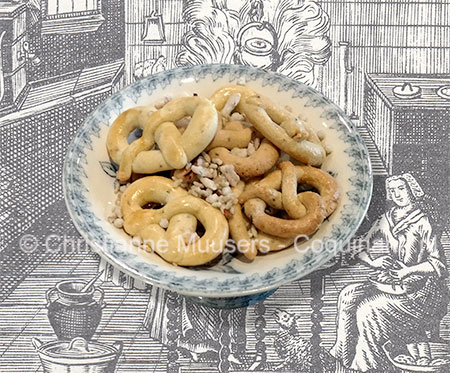 Roast the coriander seeds in a dry pan until they release their fragrance. Crush them coarsely with a wide knife or in a mortar. There should still be discernible pieces.
Temper the almond flour with powdered sugar, gum tragacanth, and coriander seeds and aniseed. Beat the egg whites with a pinch of salt and add them to the almond flour. Knead together into a dough. It will be firm but remain slightly sticky. Wrap the dough in some plastic foil and let it rest for at least 1 hour (or longer) in the refrigerator.  When the dough has ripened, it will not be sticky anymore.

Divide the dough into portions of 20 gram (0.7 oz). Form ribbons from about 20 centimetres (about 8 inches). Make pretzel-shaped cookies from the ribbons. Put them on a oven tray, covered with baking paper or silicone baking mats. It is not necessary to grease the baking paper or mat.
Bake the cookies in the oven at 150 °C (300 °F) for 30 minutes. To make a glaze, baste the cookies 10 minutes before the end of baking with some beaten stirred egg white, and repeat this after 5 minutes. The cookies will remain rather pale. After baking, let the cookies cool on a cake rack.

Cookies can always be served! But note that these almond cookies have a softer bite than cracklings prepared with wheat flour.

Pimpinella anisum, not to be confused with Asian star anise (Illisium verum).

Vegan alternative to egg white, made from the cooking liquid of chickpeas. I have not yet experimented with it, but it seems to act just like chicken egg whites. It should be possible to make mayonnaise or meringues with aquafaba. On this page is even explained how to make it at home.

This is dried and ground sap from the root of the Astralagus tragacantha or other such plants that grow in the Middle East. Gum tragacanth is used in sugar paste and fondant for cake decoration. In the food industry it is used as emulsifier, thickener, stabilizer, and texturant additive (E 413). It can be ordered online or in shops that sell ingredients for baking and cake decorating. In the eighteenth-century recipe on this page the gum is not powdered but solid lumps that have to steep and then heated in the dough. Powered gum tragacanth only needs to be added to the dough, but it needs some time to become effective.

Almond cookies from the 18th century
The Dutch cookbook from 1746 calls these cracklings ‘excellent’. They are prepared without flour or fat, and contain no gluten.
© Author Christianne Muusers