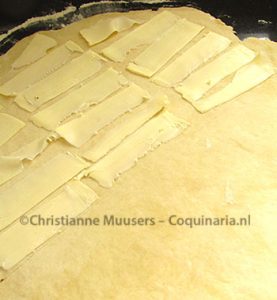 Modern puff pastry is made with a lot of butter and without eggs, although the puff pastry from Lancelot de Casteau does contain eggs. The basic dough for puff pastry is made with butter, and during the first time the dough is rolled out, extra butter is added. The butter must remain visible in the dough. During the baking process the butter separates the dough into very thin layers. There are several methods to add the butter. The French method is (naturally) the most exquisite but also the most complicated. The German method is rather unwieldy, the Dutch method is more simple and handy, but of course my own method is not bad at all. The recipe below is inspired by the recipe for puff pastry by Glasse and Farley from the eighteenth and nineteenth century.

My puff pastry recipe in detail 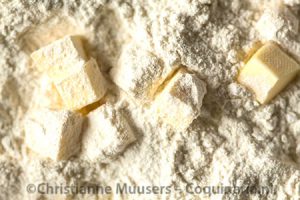 Put the water in the refrigerator for about 30 minutes (especially during summer!).
Sift the flour, dice the butter. I always add a little flour to the butter to prevent the lumps of butter sticking together.
Knead flour, salt and water into a dough, than add the pieces of butter and knead again. The butter must remain visible. Cover the dough and let is rest for a half hour in the refrigerator.

Sprinkle some flour on the worktop. Roll out the dough to a more or less rectangular sheet. Use a slicer or knife to cut thin slices from a stick of butter, and cover one half of the dough with them. Leave ½ to 1 inch (1 to 2 cm) free around the edges. Fold the other half over the butter slices, press the edges to seal the butter inside. Roll the dough out again, fold it and let rest, wrapped in plastic foil, in the refrigerator for about 30 minutes.

Then take the dough out again and roll out once more: first in one direction, fold, then in the other direction (at 90° angle). Repeat two more times.

Puff pastry can be baked at high temperatures, as it does not contain any sugar (220 °C/430 °F or more). It takes about 20 minutes to bake puff pastry. This has consequences for the stuffing: it has to be done in that time too.

Puff pastry dough is easy to freeze, but do that as a sheet, and not as a big round ball of dough.