Rhubarb is a culinary eccentric, the counterpart of the tomato. Much like the tomato is a fruit that we treat as a vegetable, the rhubarb is actually a vegetable that we treat as a fruit. However, this has only been the case since the last two centuries or so and even then not wholeheartedly. That could be due to the effect rhubarb on the teeth: rhubarb leaves a rough layer on the teeth after eating which feels odd to the tongue. Moreover, the acidity of rhubarb is not to everybody’s taste. Still, give it a try! 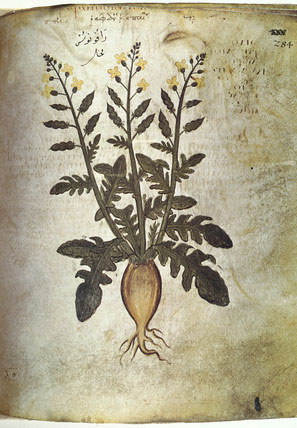 The scientific name for rhubarb, Rheum rhabarbarum, goes all the way back to Antiquity. Rha was the name for the Volga River where the plant grew according to the Greeks, and that was also where ‘the barbarians’ lived.

In the Middle East rhubarb stalks have been used in the kitchen since the Middle Ages and appreciated for their acid taste. But in Europe rhubarb remained unknown, except for the dried root that was used as medicine. It was not until the sixteenth century that fresh rhubarb arrived in Europe, and for centuries it would remain more of a curiosity than a culinary ingredient.

Originally, rhubarb was indigenous in Siberia. The Chinese used the dried and powdered root as medicine. The active ingredient is anthraquinone; the French wikipedia has the most relevant information on this ingredient. The Chinese kept the production method of the medicine pulvus rhei secret. During Antiquity the powder was already traded to Europe as a very expensive cure against obstipation and other complaints. During the sixteenth century powdered rhubarb root cost ten times as much as the same amount of cinnamon, which was also an expensive spice at the time.

The following recipe is an example of how pulvus rhei was used during the sixteenth century: steep 30 gram raisins in dry Malvasia (wine), drain them well and sprinkle them with 3 to 4 gram dried rhubarb root. Chew these raisins, and the constipation is gone. The source of this recipe is Giacomo Castelvetro, an Italian who lived in England (see bibliography). 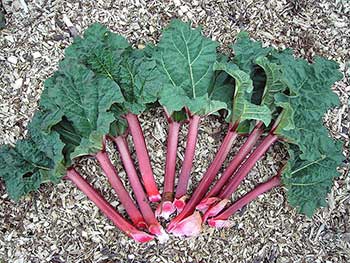 Like spinach, rhubarb has a high content of oxalic acid, which can be bad for your teeth. It forms small crystals that attach themselves to the enamel. Do not brush your teeth immediately after eating rhubarb (or spinach), because that would cause more damage. However, there is a simple remedy against the adverse effect of oxalic acid: simply add eggs or milk, cream or butter to the dish. These ingredients neutralise the acid. That is why we often eat eggs with spinach, or eat creamed spinach. In the following recipe, the pie’s stuffing is tempered with eggs, and the rhubarb fool is prepared with cream. So you can safely eat these dishes. However, do not eat rhubarb leaves, because these contain more oxalic acid than the stalks. 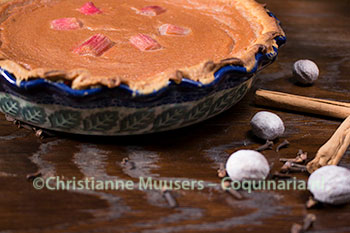 Rhubarb in the kitchen

The English were the first in Europe who adopted rhubarb in the kitchen. Maria Rundell (1745-1828) published a recipe for rhubarb pie in A New System of Domestic Cookery (1807). Fifteen years later William Kitchiner (1775-1827) published a short chapter dedicated solely to rhubarb recipes in The Cook’s Oracle (edition 1822). Kitchiner was an optician, amateur musician and – what’s in a name – talented cook. It seems he not only prepared food himself, but also did the washing up afterwards!

Kitchiner’s chapter on rhubarb is titled ‘How to dress spring fruit’, but not all recipes are sweet. There are recipes for savoury rhubarb soup with onions, carrots and ham, and rhubarb sauce for mackerel (instead of the more traditional gooseberry sauce). A rather sour syrup with rhubarb, lemon peel contains a little sugar. Sweet dishes include rhubarb pudding, rhubarb pie and the typically English dish rhubarb fool (pureed fruit with cream).

In the Dutch version of the Keukenboek (1867) by Henriëtte Davidis rhubarb is listed under vegetables. According to her the young leaves of the rhubarb can be prepared as spinach (don’t do this!), the stalks can be prepared as gooseberries and the flower buds can be prepared as cauliflower with a simple sauce. Removing the buds is also important if you want to harvest the stalks, because the flowers will use much of the energy of the plant with shorter stalks as a result.

The recipe is from William Kitchiner, The Cook’s Oracle  edition 1822, pp.453/454. The recipe is already in English, so no translation is necessary.

Spring Fruit – or Mock Gooseberry Fool
Prepare a Marmalade as directed for the Pudding; to which add a pint of good thick Cream; serve up in glasses, or in a deep dish; – if wanted in a shape, dissolve two ounces of isinglass in a little water, strain it through a tammis, and when nearly cold put it to the cream, pour it into a jelly mould, and when set, turn out into a dish, and serve up plain.

For the Marmalade
Peel and well wash […] sticks of rhubarb, blanch it in water three or four minutes, drain it on a sieve […]
[…] put it in a stew pan with the peel of a Lemon, a bit of Cinnamon, two Cloves, and as much moist sugar as will sweeten it; set it over a fire, and reduce it to a marmalade, pass it through a hair sieve […]

Although they are not mentioned in the original recipe, I have used pistacchios as garnish. I like the colour combination, and the bite the nuts add to the otherwise soft dish.
Dessert for 4 to 6 persons; preparation in advance 15 minutes + cooling; preparation 10 minutes. 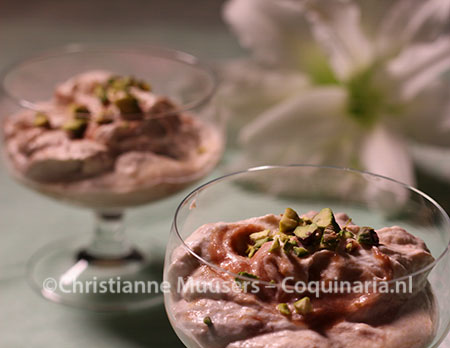 Prepare the rhubarb marmalade, and let it cool and then keep it in the refrigerator.

Whip the cream with a dash of salt. Do not add the sugar until the cream is stiff. Then add the cream to the rhubarb puree in a large bowl. Mix rhubarb and cream lightly, it is best if there are still some lighter and darker streaks visible. Scoop the fool in small bowls or glasses and sprinkle some chopped pistachios over it.

Serve as soon as possible, preferably the same day. Put the fools back in the refrigerator if they will not be served right away. Serve with whipped cream if desired.

According to Kitchiner the fool can be reinforced with isinglass (fish glue), to make rhubarb pudding. Nowadays isinglass is hard to find and very expensive. Use gelatine instead. Dissolve the gelatine in one deciliter heated rhubarb marmalade and combine this with the cold purée and whipped cream. Rinse a pudding mould with cold water and pour the rhubarb mousse in the mould. Let it set for at least three hours in the refrigerator. Dip the mould in hot water for a few seconds and demould the pudding on a plate. Garnish with some extra whipped cream and pistachio nuts.

Kitchiner writes: “reduce it to a marmalade”. The amounts given below will yield about 5 decilitres rhubarb ‘marmalade’.

Add everything to a cooking pan and let it simmer until the rhubarb is done, which should taker about ten minutes. There is no need to add water. Remove the spices, and puree the rhubarb in a blender or push it through a strainer.

Kitchiner uses ‘moist sugar’ for the rhubarb marmalade. This is not sugar syrup, but dark muscovado sugar or unrefined or partially refined cane sugar. This still contains some moisture, hence the name moist sugar. Some brands sell different varieties of moist sugar, like the British manufacturer Tate & Lyle, which all have different flavours.