The basis for al kinds of sauces 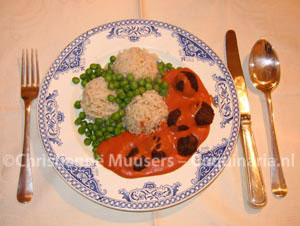 Some of the recipes on Coquinaria describe how a soup, sauce or ragout is thickened with a roux. Many sauces in the classic French cuisine are based on this technique.

Making a roux is not difficult. Just remember that the amounts of butter and flour must be the same in weight. For cooks that prefer using volume as a way of measuring, that will pose a problem, as one tablespoon butter and one tablespoon flour do not weigh the same. And one tablespoon butter must be soft or melted butter, otherwise it will not fill the spoon. At the request of Mr. Brink, who notified me of the difficulties in this regard for American cooks, I have added extra information below the table.

There are several kinds of roux, depending how hot and dark the butter gets before adding the flour. For most preparations a white roux is used.

Once the art of making a roux is captured, you’ll never need to buy packaged sauces with unwanted additions again. Plus, the possibilities of combining ingredients are endless, you do not need to buy a new package every time yu ant to make another sauce.

Béchamel is a sauce made from a roux with milk or cream. This recipe can be used to make a sauce for lasagna, for example.
To make five decilitre sauce; preparation 10 to 15 minutes.

See the description above on how to prepare a roux. When the béchamel sauce is finished, keep stirring once in a while to prevent the surface from congealing.