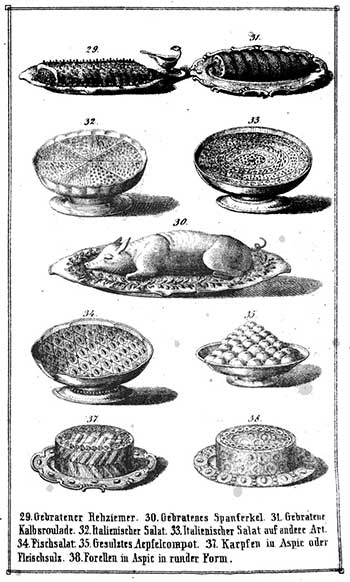 The recipe on this page was my Christmas card from 2018.

The illustration above is from the Lindauer Kochbuch that contains the recipe for anchovy toast. This is a German cookery book that has been in print from the middle of the nineteenth century to 1925. The full title is the Lindauer Kochbuch für guten bürgerlichen und feineren Tisch, written by Christine Charlotte Riedl. She was born in 1801 as Christine Charlotte Schmid, and worked as cook in several inns, like a Gasthof (inn) in Augsburg. In 1831 she married Georg W. Schlatter, and together they ran the inn Zum goldenen Lamm in Lindau. This Gasthof can still be visited. Two years after she became a widow, Christine married again in 1844, with Clemens W. Riedl. They continued to exploit the inn. She published her Lindauer Kochbuch in 1851 and 1852 in seven separate parts. The couple ran the new train station restoration in Lindau from 1853 to 1865, which was a popular destination because of its picturesque location (on an island in the Bodensee in the South of Germany). Christine Riedl published a ‘doll’s cookbook’ in 1854: Die kleine Köchin. The same year saw another doll’s cookbook by Julie Bimbach. The best-known doll’s cookbook is from Henriette Davidis, but was published two years later in 1856. These were the first cookbooks for children, or rather, for girls. In those years it became tradition to present girls with a real working doll’s kitchen at Christmas. (source Wikipedia).

Finger food for a ball

The Lindauer Kochbuch also describes the fare to be served during a ball or dance at home when guests had not had supper before the feast. The hungry guests, tired from dancing, could recover with a large buffet filled with hot and cold dishes. The anchovy toast on this page was one of the suggested dished, other dishes were goose liver, salami, cold roast, trout and carp in aspic, and cold roasted turkey or capon. The guests could also choose from several hot soups, as well as all kinds of pies, cakes, puddings, and custards. After midnight came the hot and cold alcoholic drinks, like punch, grog and Glühwein. An example of such a drink for a ball is the royal punch.

A much later edition of the cookbook (from 1894) has been reprinted as facsimile, under the title of Großmutters Kochbuch (grandmother’s cookbook). The author is nowhere acknowledged. I found it by scrutinizing the French title page (the page opposite the flyleaf but before the actual title page) where she is mentioned in exceedingly small letters. The original title of the cookbook is not mentioned at all. But without realising it, I was already years in possession of the cookbook of Christine Riedl. 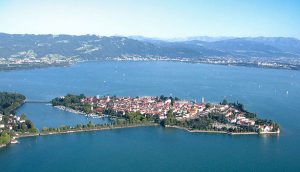 The small and picturesque town Lindau is situated on a little island near the coast of the Bodensee, a lake between Germany and Austria. It has been a place to visit ever since the railway reached it. Maybe you have been there and if not, it is worthwhile to visit.  The station where Charlotte Riedl managed the restoration was on the island itself, it was the Southern terminus of the Ludwig-Süd-Nord-Bahn which traversed Bavaria. The railway was built between 1843 and 1854. There is a new station now, built some hundred years ago. (about the railway)

The text is from the fourth edition of the Lindauer Kochbuch from 1865. (see bibliography)

First, the anchovy butter is prepared, then the toast. These are at their best right after preparing them. In the Dutch division of Coquinaria there are two modern recipes for toast with anchovies as ingredient: Spanish Garlic toast and Italian Crostini with chicken livers. Use google translate to read them.

These is a one-bite snack, each slice of bread yields 4 toasts. Use a cookie cutter or small glass to cut out the toast.
Snack (16 small toast) for 4 to 8 persons; preparation in advance 10 minutes; preparation 15 minutes. 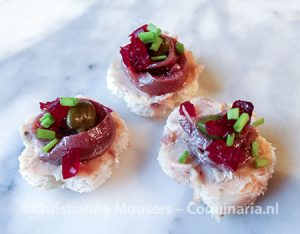 Make 4 squares or other forms from each slice of bread, using a knife or a cookie cutter. Spread some olive oil on one side of each piece. Place them with the olive oil underneath in a dry frying pan and fry them until they are golden. Do not flip them over.
Have the anchovy butter ready at room temperature. Steep the anchovy fillets in milk or water if they are too salty, otherwise, just pat them dry with some paper towels. Cut each fillet lengthwise into two strips. Rinse the capers and let them dry. Keep chopped beet and chives separate.

Spread the anchovy butter on the untoasted side of the bread. Roll up an anchovy fillet and put it on the toast. If the fillets are rather short, use two fillets to make the spiral. Place one caper on top of the anchovy. Sprinkle chopped beet and chives on the toast just before serving.

In Riedl’s cookbook this recipe is the first in the chapter for snacks that are to be served after the soup-course. She calls them hors d’oeuvres, nowadays these snacks are served prior to the actual meal. And, as already mentioned, they are also a great addition to a cold buffet. Beer is a good combination with these salty toasts.

Use anchovy fillets that have been preserved in salt or oil, and not preserved in vinegar or lemon juice. The anchovy must be salty, not sour. And a reminder: butter is made from milk, do not use margarine of some fabricated product with butter and olive oil or anything like that. Pure butter, that is all you need.

Salted anchovies were popular during the eighteenth and nineteenth century. This anchovy butter was also added as a condiment to warm sauces like this eighteenth-century Dutch recipe.

Mash the anchovy fillets in a mortar or with a wooden spoon. Put the puree in a bowl with the pepper. Add the soft butter in small portions and mix into a smooth purée.  Sample the anchovy butter and add more pepper if necessary. Keep in the refrigerator, use at room temperature.

A small fish, Engraulis ecrasicolus, that lives in the Mediterranean and other waters. Where I live (The Netherlands, if you hadn’t noticed yet), we seldom eat fresh anchovy. Our anchovy comes salted in glass pots or canned in oil. Use salted anchovy rather than in oil, the flesh is firmer, they taste better, and if you need but a few fillets, you’ll never get the can closed again. But if you use salted anchovy, take care to steep them in water or milk for ten minutes, else they’ll be too salty.