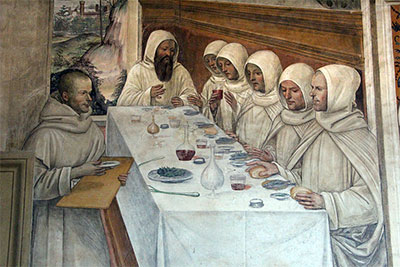 The Opera from this recipe has nothing to do with music, and everything with the opus magnus of Italian cook Bartolomeo Scappi, which appeared in print in 1570. Opera means ‘the work’ (in Italian, in Latin it would have been ‘the works’). Nowadays the cookbook is mainly known for its magnificent engravings which illustrate all kinds of kitchens, kitchen utensils, and even chamber furnishings (indcluding a footwarmer). The recipe on this page is to celebrate the lovely English translation of the Opera that was published by the Canadian culinairy historian Terence Scully in 2008.

Bartolomeo Scappi (1500-1577) already had a professional life to be proud of when his book was published. He served with several cardinals, and was cuoco segreto (personal cook) for pope Pius IV (1556-1565) and his successor Pius V (1566-1572).
A brief description of the Opera can be found at Scappi’s recipe for Tortelli in brodo. The picure on the left is of a sixteenth century fresco from the Abby of Monte Oliveto Maggiore, which depicts Saint benedict with his brethren starting a meal. On the small plates are little fish, the serving dish is filled with a vegetable. Probably not broccoli, but some kind of leafy green. For the record: Bartolomeo Scappi did not work in a monastery kitchen, but in palatial kitchens. His patrons were worldly prelates, not monks.

Broccoli is probably the most hated vegetable on Earth. Maybe that is because of the cabbage odor that permeates the kitchen when it is cooked. “Just don’t eat broccoli!”, you would say. But alas, broccoli is so disgustingly healthy that conscientious parents traumatize their offspring by offering these green flower buds again and again. American ex-president George H.W. Bush (father of the other Bush) is one of the most well known broccoli haters of this time. A quote from 1990: “I do not like broccoli. And I haven’t liked it since I was a little kid and my mother made me eat it. And I’m President of the United States and I’m not going to eat any more broccoli.” (view this little speech on YouTube in an fragment of the British quiz Have I got News for You). Once (until 2015) there was an American fansite dedicated to broccoli, but that has dissapeared. But I know of not one but several cats who love to eat broccoli. My own cat Clio even nibbled Brussels sprouts.

But broccoli is so very healthy!

All members of the cabbage family are healthy, but broccoli is the champion. This vegetable is rich in fibers, and contains relatively high amounts of calcium, iron, and vitamins C and E. Some even say that one of the chemicals in broccoli, Indole-3-carbinol, can not only prevent cancer, but even cause a decrease in tumorgrowth. Broccoli is not unique in this, other kinds of cabbage also contain indole-3-carbinol.

The Italian recipe is from the facsimile edition from 2002 of the Opera (online edition), from book III (recipes for fishdays and Lent, leaf 153, recipe CCXXXVII). The English translation is taken from de edition by T.Scully, page 363, recipe# 237 (see bibliography). More on Lent can be found at the medieval recipe for Fake Fish.

Per cuocere Broccoli asciutti.
PIglinosi li broccoli dal mese di Febraro per tutto Marzo netti delle frondi, & habbiasi la parte piu tenera che non sia fiorita, & facciasi bollir l’acqua con sale, & come i broccoli saranno accommodati in mazzuoli ponganosi in quella acqua bollente, & non si faccia no troppo cuocere, ma cauinosi, e sciolganosi, & ponganosi in piatti, & dapoi habbiasi oglio bollente, e spargasi cosi caldo con la cocchiara sopra i broccoli, giungendoui sugo di melangole, pepe, & un poco di quel brodo nel qual son cotti, & seruanosi caldi, percioche altrimente non uagliono. Si può soffriggere con ol’oglio uno spigolo d’aglio ammaccato per dare odore al broccolo, & quando si uorranno conseruare per una o due hore, si poranno in acqua fredda, & si lascieranno stare poi che saranno perlessati sin’a tanto che si uorranno ricuocere. In questo modo si conserueranno i broccoli uerdi,& non piglieranno tristo odore, & si seruiranno nel modo sopradetto.
To cook dry broccoli.
Get broccoli between February and the end of March, with its leaves removed. Take the tenderest part of it that has not flowered. Boil salted water. With the broccoli done up into little bunches, put it into that boiling water. Do not overcook it but take it out and put it into dishes. Then get boiling oil and drip it hot with a spoon over the broccoli, adding oange juice, pepper and a little of the broth in which it was cooked. Serve it hot because otherwise it is no good. You can also sauté a crushed clove of garlic in the oil to flavour the broccoli.
Whenever you need to hold it back for an hour or two, put it into cold water after it was parboiled and leave it there until you want to recook it. Green broccoli is kept the same way and it will not take on a bad smell. It is served in the above way. 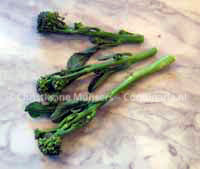 I do not think that dry broccoli is the same as dried broccoli. The broccoli seems to come directly from the kitchen garden. But what is the difference with green broccoli?
At least it is clear that Scappi’s broccoli did not have the compact, bunched shape that modern broccoli has. I ran across some tenderstem broccoli, imported from Maroc (see picture on the left). According to wikipedia this vegetable has been developed by a Japanese seed farm, from a cross-over between broccoli and kai-lan (Chinese broccoli). Another name for tenderstem broccoli is broccolini.
According to the original recipe a little of the cooking liquid must be poured over the cooked broccoli. I think you can forget that. Just drain the broccoli after cooking, you’ll have enough cooking liquid anyway.
Side dish for 4 persons; preparation in advance 10 minutes; preparation 5 minutes. 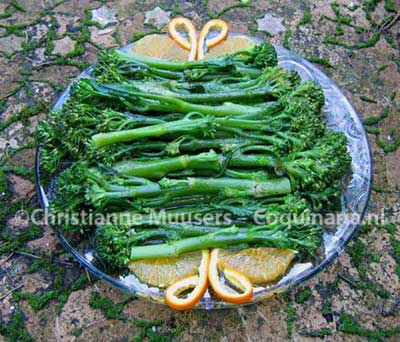 Separate the florets from the big stalk. You can peel the stalk, slice it, and blanch it with the florets, or use it for making soup. If you can find broccolini, use that. You’ll only have to cut the ends off the stalks.
Place orange juice and garlic clove near at hand.

According to Bartolomeo, the broccoli can be blanched in advance and heated when necessary. But it is better to blanch the vegetable just before serving in salted water, just for a few minutes, to keep the broccoli firm. Drain and continue at once.
Heat olive oil in a small skillet with the crushed garlic clove. Remove the garlic after 30 seconds.
Arrange the broccoli or broccolini on a serving dish, sprinkle with hot olive oil and orange juice. Grind pepper over it, and serve at once.
If ytou wish, you can blanch the broccoli in advance, and keep it in iced water to preserve the bright green colour. Reheat in the microwave after draining the broccoli.

“Serve it hot because otherwise it is no good”. So: serve straight away.
Think of this dish as a ‘warme salad’. You can serve it without problems in a modern menu, as appetizer or side dish.

The bitter orange, Seville orange or bigarade (Citrus aurantium) is not a variety of the sweet orange, but a separate species that stems from the same plant family as rue, the Rutaceae. Bitter oranges precede sweet oranges by several centuries in Europe. They were planted on Sicily as early as the eleventh century; sweet oranges were not introduced into Europe before the end of the fifteenth century.

Broccoli in the Opera, an Italian recipe
A  simple, 16th-century recipe for broccoli from Bartolomeo Scappi.
© Author Christianne Muusers