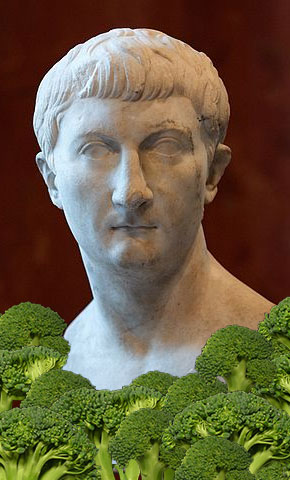 A recipe for broccoli from De re coquinaria, a Roman cookbook with recipes from the 1st to 4th centuries. If a vegetable like broccoli already existed, it was probably something that looked like Brassica rapa var. Cymosa, also known as Cima di rapa or rapini (broccoli raab): thin stalks with leaves and small flowerbuds. Where I live (the Netherlands), Cima di rapa is difficult to find. Tenderstem broccoli (see Scappi’s recipe for broccoli) is a good replacement for older recipes with this vegetable.

In my research for the history of broccoli I kept stumbling on sites declaring that Romans held broccoli in high esteem. To illustrate this, many recount the amusing story of the only natural son of emperor Tiberius, Drusus Minor (13 vC-23 nC), who loved broccoli so much that he ate nothing but broccoli prepared from a recipe of Marcus Gavius Apicius, during a whole month. It wasn’t until his father forbade him to continue his broccoli diet because of his smelly bright green urine, that he started eating normally again. It didn’t help him anyway, he was poisoned by his wife Livilla on instigation of his rival Sejanus.

The strange thing is, not one of these websites mentioning the story of broccoli-loving Drusus provide a source. They all parrot the same story after each other. The only combination of Drusus, Apicius and cabbage to be found is a story by Pliny the Elder, stating that Drusus actually hated cymia, because Apicius hated it too (C. Plinius Secundus, Historia Naturalis boek XIX, c.41, see bibliography). And Cymia, what is that? Not the flower buds, but young shoots of the cabbage, growing from the stem. So, all these sites provide not just the exact reverse of the story, but they even are sloppy with the definition of what vegetable it was that Drusus loved/hated so much! All mention of ‘cabagges’ are translated to ‘broccoli’ by the broccoli-evangelists.

By the way, the story of Drusus being poisoned is true.

Despite Drusus’ aversion, most Romans thought cabbage (all cabbages, not just broccoli) were invaluable for a good health, and not just as nutrition. Cato describes the medicinal uses of cabbages in De agricola (‘on farming’, second century BC), as for example the following way to prevent drunkenness: before the party, eat as much vinegared raw cabbage as you can, and when about to dine, eat five cabbage leaves, then you can drink as much as you want. However, this is a fable.

Of all recipes in De re coquinaria for cima and caulicules, five are for boiled cabbage (cauliculus) that is closed enough to form a head (in one recipe the cabbage must be cut in half). There is but one recipe for cimae, ‘young greens’ in the translation of Grocock and Grainger (see bibliography). Let’s pretend to be certain that these young greens are some kind of broccoli, and you get the following recipe: (Apicius, 3.9.1 and 3.9.1a, edition Grocock and Grainger p.164).

Side dish for 4 to 6 persons; preparation 10 minutes. 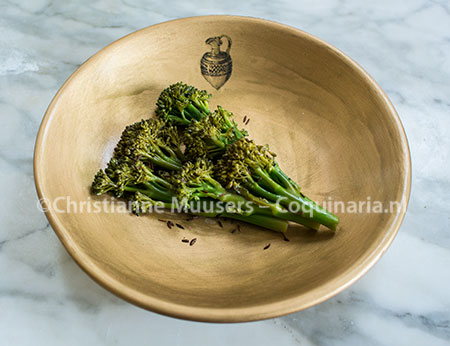 Blanch broccoli or young cabbage leaves, broccoli raab or whatever. Mix wine(vinegar) and oil, salt, and lightly toasted cumin seeds. The alternative version is for a sauce with wine(vinegar), oil and liquamen (Roman fish sauce), chopped herbs and some blanched cabbage leaves. To finish it off, the dish is sprinkled with black pepper. Romans loved peppery dishes.

Levisticum officinale. An umbelliferous plant (like wild celery and parsley) that was popular in the classic Roman kitchen, and still used in the Middle Ages. You can grow it in your garden. When flowering, it can grow as tall as 2 meters. The taste is rather overbearing, use it in small amounts. It is very nice in stock.

A small shrub (Ruta graveolens), indigenous to Southern Europe. The odiferous plant has a strong, bitter taste. The ancient Greeks and Romans loved rue, and it is still an ingredient in the Italian drink Grappa Ruta. In modern cuisine rue has mostly dissappeared, which is a pity. A few rue leaves in broth are very good. However, it is thought to be an anaphrodisiac (quenches lust), and pregnant women must be careful not to use too much of it, because it could also be abortive. But a leaf or two won’t do any harm.
Rue plants can be found at garden centers. It is quite decorative, a semi-perennial with small yellow flowers that can be used to decorate any dish.

A Roman recipe for a salad with broccoli
This recipe for salad from young cabbage or broccoli) is from the Roman cookbook ‘ De re coquinaria’ .
© Author Christianne Muusers