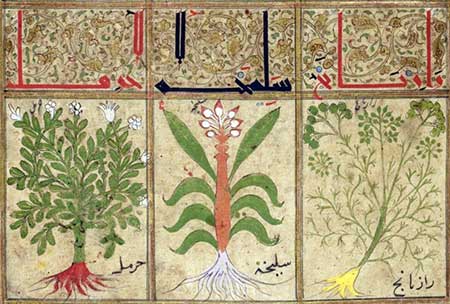 There are few Europeans who can read and understand Arabic, let alone medieval Arabic, and I am not one of them. That is why the translation in English of the tenth century Kitāb al-Ţabīkh of al-Warrāq from Nawal Nasrallah is so valuable (also literally, the book is quite expensive but worth every penny).

The cookbook (that is also the meaning of Kitāb al-Ţabīkh) consists of 132 chapters. The author, al-Warrāq, gives a description of the famous Abassid cuisine, but also advise on health care and good manners. All this he illustrates with poems by several known and unknown poets (and some of himself). He used many sources for his compilation. “This will save you the trouble of going through the books of ancient philosophers regarding restorative foods and making digestive drinks. You will neither need to consult books on beverages and wines, nor go through the volumes compiled on medicinal electuaries and pastes.” (edition pp.67/68). The author al-Warrāq his a mystery: “of the author/compiler of this commisioned volume, we know nothing other than his book”, states translotor/editor Nawal Nasrallah (edition p.12).

This oldest surviving medieval cookbook is not the first ever written, but thanks to the author we at least know some of the titles and writers/commisioners of lost books.
Al-Warrāq begins is book with five chapters on the causes of spoiled food, kitchen utensils, spices and aromatics, the eight tastes of food (sweet, sour, salty, greasy, insipid, pungent and bitter) and remedies for burned food. He continues with twenty-five chapters on the medicinal properties of food, seventy-nine chapters with culinary recipes, and in conclusion he presents twenty chapters on miscellania like beverages, the humoral properties of toothpicks, the importances of washing hands, and the benefits of sleeping after a meal.

The picture above is a detail from an Arab manuscript dated 1199.On the left is rue, on the right cassia. Both are used in the recipe on this page. More about the Arab medieval cuisine can be found with the recipe for Arabian meatballs in eggplant sauce. 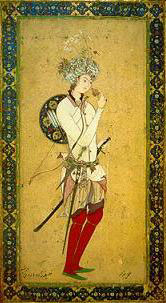 The recipe on this page seems to be for a ‘snack’, it is the first in Chapter 75, ‘Making fast meat dishes’ (Mulahwajāt, edition p.315, see bibliography). Apparently this was a favourite dish of caliph Harun al-Rashīd. If you wonder why that name sounds familiar: the caliph is a protagonist in several of the stories from One Thousand and One Nights (Arabian Nights).

The historical Harun al-Rashid (763-809, contemporary of Charlemagne, to the right a portrait of the caliph) was the fifth caliph of the Abbasid Caliphate (which existed from 748 to 1258), his 24-year long caliphate is looked upon as the Golden Age of science and culture.
The chapter concludes with two poems on mulahwaja, the last verse of the second poem: “Mulahwajawith wine undiluted – these are my healers and rejuvenating tonics”. I wonder how ‘fast’ these meat dishes actually were, the poem mentions “Cooked hurriedly in just half a day”. In my adaptation I have chosen for ‘fast meat’ in the modern sense.

The dish is prepared in a pot. This was not made of clay (earthenware), but of soapstone. You can still buy soapstone pots to cook in. They are recommended because of there durability: They do not smell of the foods that are prepared in it, are very highly heat-resistant, and can retain the heat twice as long as cast-iron pots. And, they are naturally non-stick. However, Al-Warrāq warns his readers that soapstone pots can absorb flavours. The pots must be cleaned by repeatedly ‘washing’ them with clay. Clay pots were used, in the oven. Tin-lined copper pots were used for dishes that had to be stirred long and vigorously (stone pots would break), and iron frying pans were used for frying fish. Brass frying pans were used for deep-frying (edition pp 85/86, see bibliography).

Not having at my disposal, or being able to read if I had, the Arabic text, I used the translation by Nawal Nasrallah, p.315 (see bibliography).

Mulahwaja, used to be made a lot for al-Rashid:
Dice meat and put it in a pot. Pour oil on it. Add onion, cilantro, rue, and leeks, all chopped. Let meat fry until it browns. Add to the pot, coriander seeds, caraway, black pepper, a bit of murrī, a bit of vinegar, cassia, and galangal.
Sprinkle the dish when it is done with a little honey, and serve, garnished with chopped cilantro.

The recipe does not specify which kind of meat is to be used, but it must be ‘quick meat’. The other two recipes in this short chapter are for lamb and kid, in the poems ass and fawn are mentioned as the main ingredient for mulahwaja.
Main dish for 4 persons; preparation in advance 7 minutes; preparation 12 minutes. 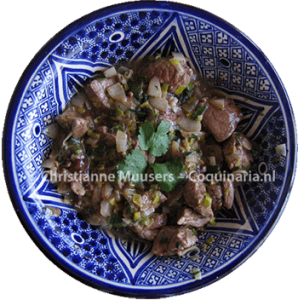 Cut and chop the ingredients as described in the list above.
Add warm water to the honey, stir until blended.

Heat the oil in a heavy pan, add the meat and sear it. Then add onion, leek, cilantro and rue. After one minute of stirring, add the rest. Temper the heat a little, and stirfry until the meat is done, just a few minutes.

As soon as it is ready. Sprinkle with honey before serving, and garnish with whole cilantro (or chopped, if you follow the recipe to the letter).

Also known as ‘Chinese cinnamon’, and indeed, cassia (Cinnamomum aromaticum or C. cassia) is related to real cinnamon (Cinnamomum verum or C. zeylanicum). Both trees are indigenous to Southeast Asia. The communis opinio is that cassia is inferior to cinnamon, but, according to Davidson in The OCF, “Good cassia is, however, a respectable spice”. If you don’t have cassia, use cinnamon.

Both Alpinia galanga (greater galanga) and Alpinia officinarum (lesser galanga) are from South China. The rhizome of lesser galanga has a stronger taste. In Indonesia this spice is called laos, and that is the name by which it is known in the netherlands. In the Middle Ages this was a popular spice. It resembles ginger in taste. Not surprisingly, galanga belongs to the same family.

A spicy sauce made from fermented grain, used in medieval arab recipes. As a substitute, soy sauce is often recommended. In my opinion taotjo (fermented soy bean paste) is a better substitute. The recipe.

A small shrub (Ruta graveolens), indigenous to Southern Europe. The odiferous plant has a strong, bitter taste. The ancient Greeks and Romans loved rue, and it is still an ingredient in the Italian drink Grappa Ruta. In modern cuisine rue has mostly dissappeared, which is a pity. A few rue leaves in broth are very good. However, it is thought to be an anaphrodisiac (quenches lust), and pregnant women must be careful not to use too much of it, because it could also be abortive. But a leaf or two won’t do any harm.
Rue plants can be found at garden centers. It is quite decorative, a semi-evergreen with small yellow flowers that can be used to decorate any dish

Mulahwaja, an arab dish with lamb, herbs and spices
An Arab recipe from the 10th century, for the favourite dish of Harun al-Rashid (the caliph from 1001 nights).
© Author Christianne Muusers