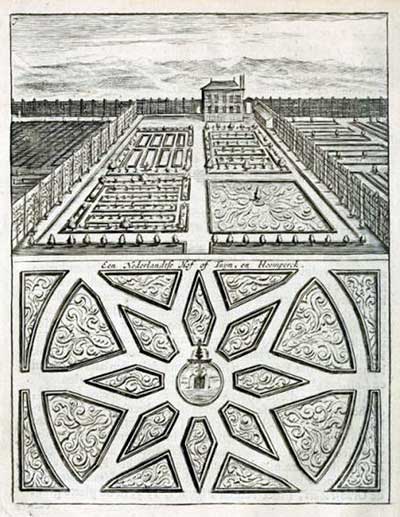 A recipe from the First Stadtholderless Period

On 30 April 2013 Dutch Queen Beatrix abdicated from the throne and Willem-Alexander was inaugurated as King of the Netherlands. For the first time in 123 years the Netherlands have a king instead of a queen. As a counterweight to the excessive monarchist manifestations, I hereby present a recipe from the First Stadtholderless Period (1650-1672/75). The Kingdom of the Netherlands may be nearly two centuries old, but members of the Orange-Nassau family have been in a position of power much longer, from the time William the Silent accepted the stadtholdership of the provinces Holland and Zeeland in 1572. There were but a few exceptions: the first (1650-1675) and second (1702-1747) stadtholderless periods, and the Batavian Revolution and French occupation (1795-1813).

A meal from the vegetable garden

In 1667 the States of Holland abolished the stadtholdership ‘for all eternity’. The most well-known Dutch cookbook from the Dutch Golden Age, De Verstandige Kock (The sensible cook) was first published in that same year. It had an addition, the Verstandige confituurmaker (The sensible confiturier), and in 1668 a third part about the slaughtering time was added. Sometimes the Verstandige Kock with its two additions was published separately, but often it was combined with publications on designing and maintaining country estates. Because that was the hobby par excellence for the rich merchants from the seventeenth century. After all, “Living off country estates and in the country is, according to many scientists, the most pleasant, advantageous, healthy, yes often even the most blissful life that one could wish” (“Den Hof-bouw, en ‘t buyten-leven, is, naer ‘t seggen van veel Geleerden, het vermakelijkste, voordeeligste, gesondtste, ja menichmael ook wel het saligste leven, dat men sou kunnen wenschen”; from the introduction to Den Nederlandsen Hovenier (The Dutch Gardener), the first volume of the Vermakelijk landleven (Pleasant Country Life)). In 1669 the Verstandige Kock would accompany these volumes in a third one. The small cookery book of about thirty pages provides the gardener, or rather the cook of his master, with recipes to process the produce of his vegetable garden. The book was popular, until the last edition in 1802, almost thirty editions were printed. So, maybe our King William I ate dishes prepared from recipes from the Verstandige Kock!

More about this cookbook can be read at the recipe for Garden Salad. The picture above is from The Dutch Gardener in an edition from 1699, and presents “a common court or garden in the Hollandish or Dutch manner” (“een gemeene Hof of Tuyn, naar de Hollandse of Nederlandse wijse”). According to the description, flowers grow in one square bed, in another are leafy vegetables (for salads), the third contains asparagus, cauliflower and savoy cabbage, the fourth legumes and carrots. The surrounding fence supports summer fruit (cherries, morels, apricots and peaches); strawberries grow in several spots; spread around the garden grow apple trees and  pear trees; quinces and medlars grow near the water; there are beds with roses, gooseberries and currants. The garden shed is covered with grape vine, and there is a bleaching field and a chicken pen. 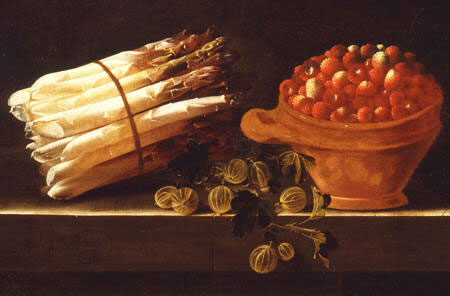 The produce of the vegetable garden is a prominent part of the recipe for Chicken with spring vegetables. Endive, sorrel, lettuce, celery and asparagus accompany the chicken in the pan. Such a diversity of vegetables is rare in medieval meat dishes. Originally, asparagus were used as a medicinal ingredient; their diuretic property was known since antiquity.

During the sixteenth century the white, thick-stemmed asparagus grew ever more popular. One particular cultivar, the ‘Violet Dutch’ which had purple tops, was a great success in England.

Asparagus grow in rows along ditches which are filled with cow dung or “Poort-Aerde, dat is menschen-drek” (human waste), and the buds were covered with a layer of earth of about a foot high, according to the Verstandige hovenier(Sensible Gardener, also part of the Pleasant Country Life). In The Sensible Cook we see a very modern looking recipe for asparagus: “Aspergies worden slechts ghekoockt, niet al te murruw (zacht), en dan gegeten met Olie, Azijn en Peper, of anders met gesmolten Boter en geraspte Notemuskaten.” (Asparagus are merely cooked, and then eaten with oil, vinegar and pepper, or else with melted butter and grated nutmeg, from the second edition, 1668). On the picture a detail from the Still life with asparagus, gooseberries and strawberries in a pot from Adriaen Coorte (1698, Dordrechts Museum, source Wikipedia).

In the recipe for Chicken with spring vegetables the asparagus has a minor role.

Below are two recipes, because the frickedil which is mentioned in the recipe for Chicken with spring vegetables has its own recipe in De verstandige kock (The Sensible Cook). The text is taken from the first edition of De verstandige kok from 1667. These recipes will remain virtually unchanged until the last edition in 1802, except for some modernization in spelling. For the English translation I have also looked at Peter G. Rose’s translation of The Sensible Cook (1989). See bibliography.

This recipe hardly needs to be adapted for the modern kitchen. Originally chicken and mutton are cooked separately until half done, and then they simmer in a casserole with other ingredients. In my version, chicken and lamb are first seared and then simmered for twenty minutes before the other ingredients are added. In the picture below the spring vegetables are hardly visible. They are hidden beneath the chicken, sausages and meatballs. About meatballs: the Sensible Cook has a recipe for Stuffed meatballs in lettuce.
Gillian Riley added lovage in her version of this recipe in The Dutch Table. Gastronomy in the Golden Age of the Netherlands, I have taken over her suggestion. She also added bacon and garlic, and the meatballs in her adaptation are with pork instead of veal, and with added garlic. All recipes for ‘frickedil’ in the Sensible Cook are with veal.
Main dish for 6 (without lamb and sausages) to 10 (with all the meat) persons; preparation in advance 20 minutes; preparation 60 minutes. 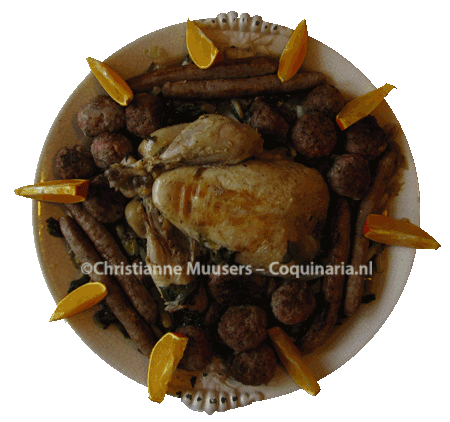 Meatballs – Mix everything in a bowl and make small meatballs. You can leave out the suet if you want to.
Chicken – Sprinkle the chicken with pepper. You can prepare the chicken whole or carved up. Do not debone the chicken until the meat is done.
Greens – Cut the leafy vegetables (endives, lettuce and sorrel) in strips. Discard the stalks of the celery, use only the leafs. Lovage is not mentioned in the original recipe, but it certainly tastes very well in this dish.
Asparagus – Prepare them as you are used to do, but not too soft. Carve them in pieces of five centimetre (two inches).

Melt three tablespoons butter in a wide casserole and sear the chicken on all sides. Add the lamb cubes and water of chicken broth. Close the pan, and simmer twenty minutes if you have cut the chicken in pieces, forty minutes if the chicken is whole. In a separate pan, sauté sausages and meatballs in another three tablespoons butter, add them to the casserole with the chicken and simmer for another fifteen minutes. Then add asparagus, leafy vegetables and herbs. As soon as the vegetables have boiled down you stir in what is left from the butter. As soon as that has melted, the dish is ready.

The chicken would probably be served whole in the centre of a large dish, surrounded by the vegetables, sausages and meatballs. The host would show off his dexterity by carving the chicken at the dinner table. This could be done in two ways: in the dish, or ‘on the fork’. The picture shows the carving of fowl ‘ on the fork’. 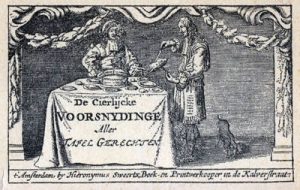 One can also debone the chicken in the kitchen. In the seventeenth century this dish would not be the only one to be served; at least two other dishes would accompany the chicken. For example a pasty or pottage.

Although potatoes go very well with this dish, they were not yet served in the seventeenth century. Instead, bread would be served, which would be white bread for the wealthy. But one could also bake bread with half rye meal/half whole grain wheat meal, with fennel seed added. Excellent for scooping up the sauce! 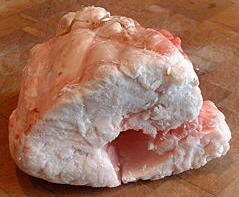 This cooking fat is hardly ever used in Dutch cuisine. Suet is the firm fat around the kidneys and loins in beef, but there is also suet from veal and mutton or lamb. Its use is more common in the English cuisine, to make mince pies and suet puddings. See also Tallow.

There are several varieties, like the common sorrel (Rumex acetosa) and the French sorrel or oseille (Rumex scutatis). The leaves taste more or less sour, depending on the amount of sunlight (more sun means sourer in taste). Sorrel grows in the wild and when you have a garden, it will turn up unasked for. Don’t dig it up root and all, just cut of the leaves and use them in the kitchen, in salads or boiled as vegetable. However, do not eat it in great quantities or too frequently, because of the high content of oxalic acid. When sorrel is boiled, the colour changes to a greyish green.

Chicken with spring vegetables, a recipe from the 17th century
A delicious dish with chicken and spring vegetables like asparagus, endives, lettuce and sorrel, from the country estates of 17th-century Dutch merchants.
© Author Christianne Muusers