There are mainly two kinds: the river lamprey (Lampreta fluviatilis), and the sea lamprey (Petromyzon marinus). In Dutch there is a third animal that is called lamprei, it is used to designate a young rabbit. Recipe: Blancmange with crayfish.

This is pig fat, heated and strained. Nowadays lard is not as popular as it used to be, because of the high percentage of saturated fat. But, just as one can occasionally eat an oversweet cake with heaps of whipped cream, one can prepare a dish with lard once in a while. Lard was widely used as cooking fat in the past, and modern Chinese cuisine still uses lard a lot.
To make lard: Take a pound of fresh or salted pork fat. Chop it in chunks, put in a skillet without adding anything, heat at low temperature, stir occasionally. After 30 to 45 minutes you’ll have cracklings and lard. Craxcklings are a treat for those people who like them (I do!). Dogs and cats also love cracklings, but give it sparingly if at all, because of the fat, and the salt (if you used cured fat). During the heating of the pork fat you can add herbs or spices like bay leaf, mace, clove, pepper. Strain the lard, put in a jar and keep in the refrigerator (keeps for months).
Pastry dough prepared with lard in stead of butter tastes great. An added bonus is that your hands will become incredibly smooth when kneading the dough, very good for dry skin (and your dog/cat will surely love to be petted by you afterwards!). Recipes: Firm shortcrust, Dough for empenada, Marinated veal cutlets, Medieval stuffed chicken, Stamppot, Coloured, stuffed eggs.

Cymbopogon citratus is indigenous to tropical regions in Asia. It is a decorative grass plant in your garden if you live in the right climate, but it won’t survive any frost. The stalks can be bought fresh, frozen or powdered (but then it has lost most of its flavour). Lemon grass is added before cooking, and removed before eating. Dutch (Indonesian) name: sereh.

We buy our sugar mostly granulated or powdered, but in the past sugar was sold as cone-shaped loafsugar. Before using it, the sugar had to be grated on special graters. Before 1600 all sugar was cane sugar. I don’t know whether it is the same everywhere else, but in the Netherlands cane sugar is always light brown, either from added molasses, or from not being 100% refined. Refined cane sugar is as white as refined beet sugar. Unrefined brown sugar may contain small traces of minerals and such, but nothing you don’t get by consuming your ordinary daily food. However, there is a slight difference in flavour, brown sugar has more taste.
The loafsugars on medieval miniatures are white, not brown. The cane sugar was as refined as possible. If you want to prepare medieval recipes the authentic way, you’ll have to use white, refined cane sugar. If you can’t get that, you’ll have to choose: either use unrefined cane sugar which has a slightly different flavour and can end up colouring the prepared dish in an unintended way, or use refined beet sugar which has the same flavour and colour as refined cane sugar, but is actually an anachronism. Recipes: Stuffed eggs, Hypocras. 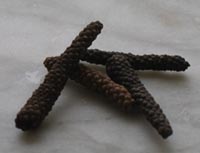 Also known as Javanese pepper (Piper longum). The very small grains grow in flower spikes, and that is how you can buy them. If you can’t find it, simply use (more) black pepper.
Long pepper was already known to the ancient Greeks and Romans, and it is not always differentiated from black pepper (Piper nigrum). Towards the end of the Middle Ages long pepper gradually disappears from the kitchen, but it was still used occasionally in the sixteenth century. Long pepper is hotter than black pepper, but not as hot as chilli peppers. Recipe: Medieval stuffed chicken

Levisticum officinale. An umbelliferous plant (like wild celery and parsley) that was popular in the classic Roman kitchen, and still used in the Middle Ages. You can grow it in your garden. When flowering, it can grow as tall as 2 meters. The taste is rather overbearing, use it in small amounts. It is very nice in stock. Recipes: Roman mussels, Beef Stock, Roman broccoli.