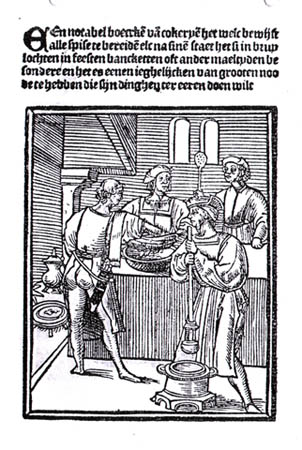 The oldest extant Dutch cookbook in print dates from 1514. It is titled Een notabel boecxken van cokeryen (A noble cookery book). The recipe on this page is taken from this book wich has 175 recipes in all. Stuffed eggs have allways been a popular dish. This particular recipe is called ghecloven nonnen, in English: ‘split nuns’. Why are they called thus? Maybe the halved egg whites with their goldenbrown stuffing reminded people of the wrinkled faces of elderly nuns in their white caps. In Eenen seer schoonen ende excelenten Cock boeck (A very nice and excellent cook book, 1593) by Carolus Battus you can find another recipe for “split nuns”. The stuffing of these eggs is more simple, only apple and cinnamon are added to the yolks.

In my adaptation of the recipe the stuffed eggs are coated with raw egg white before frying. This is not what the recipe says, but in other, contemporary recipes for stuffed eggs it is frequently mentioned. The eggs get a slightly crunchy outer layer, I like that. I’ve prepared these eggs often, and they are always appreciated.

The use of saffron, ginger and cinnamon indicates that this recipe was meant for the well-to-do households. Spices were very expensive around 1500.

The Notabel boecxken may be the oldest printed Dutch cookbook, but there are three Dutch manuscripts that are slighly older, see here for more information.

From Een notabel boecxken van cokeryen, p.46 (see bibliography). Another recipe from this cookery book is for spiced wine, Clareit; two German recipes for stuffed eggs from the fifteenth century can be found here and here. 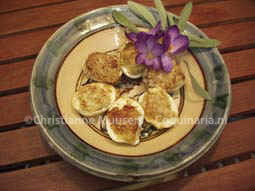 Peel the eggs, cut them in half lengthwise. Take out the yolks and mash them with a fork, together with the spices, herbs and grated apple.
If you want the stuffing to be very yellow you heat a tablespoon of vinegar, and crush the threads of saffron in it. Add vinegar with crushed saffron to the stuffing. Stuff the eggwhites.

Stir the raw egg white with a fork. Roll the stuffed eggs through the raw egg white, and fry them in a frying-pan with heated oil or butter. First fry the eggs with the stuffing downward, after one minute turn them carefully to fry the other side. One minute more and they are ready to be served.

These eggs can be eaten either hot or at room-temperature. Sprinkle cinnamon and sugar on top of the eggs just before serving. You can surprise your family at Easter-breakfeast, serve the eggs as a snack, or as the first course in a mediaeval menu.

All decriptions of ingredients

We buy our sugar mostly granulated or powdered, but in the past sugar was sold as cone-shaped sugarloaf. Before using it, the sugar had to be grated on special graters. Before 1600 all sugar was cane sugar. I don’t know whether it is the same everywhere else, but in the Netherlands cane sugar is always light brown, either from added molasses, or from not being 100% refined. Refined cane sugar is as white as refined beet sugar. Unrefined brown sugar may contain small traces of minerals and such, but nothing you don’t get by consuming your ordinary daily food. However, there is a slight difference in flavour, brown sugar has more taste.
The sugarloafs on medieval miniatures are white, not brown. The cane sugar was as refined as possible. If you want to prepare medieval recipes the authentic way, you’ll have to use white, refined cane sugar. If you can’t get that, you’ll have to choose: either use unrefined cane sugar which has a slightly different flavour and can end up colouring the prepared dish in an unintended way, or use refined beet sugar which has the same flavour and colour as refined cane sugar, but is actually an anachronism.

A decorative perennial evergreen, Salvia officinalis. If you have the use of a garden, be sure to plant one! You can pick the leaves all year round. Classical combinations are with chicken livers, with onions as a stuffing for pork, and in several egg dishes. Be careful, the taste can become overbearing.
Originally sage was used as a medicine (as the Latin name shows), but by the Late Middle Ages sage also became an ingredient in recipes for food.