A recipe from the French Golden Age

The first really new cookbooks since the Middle Ages did not appear before 1650. In France these cookbooks were the first onset to the development of the classical French “haute cuisine”. Up til the middle of the seventeenth century medieval classics Le Ménagier de Paris and Le Viandier by Taillevent were reprinted regularly.

The recipe on this page is emprunted from Le Cuisinier (“The cook”, see bibliography). This cookbook by Pierre de Lune contain many recipes that still reflect medieval tastes. However, some of the recipes present important innovations like the bouquet garni, called a paquet by Pierre de Lune (thyme, chervil, parsley, cloves, and on meatdays a piece of lard or bacon). Another innovation is the roux, a liaison of butter and flour to thicken sauces.

And then there is the order in which the recipes are presented; not by liturgical calender but according to the four seasons, although there are still recipes for meat days and for fast days, and the book ends with no less than 171 recipes (out of 900) for Good Friday.
The life of Pierre de Lune is a mystery. All that is known is that he probably was in the service of the Duchess of Orléans and later of the Duke of Rohan.

To begin with: the colour of the sauce clashes horribly with that of salmon. However, the recipe tells us to use red wine, so that is what we’ll do. For a pretty picture it may be better to use white wine. On the other hand, the lime and sugar are typically ingredients which are used to prepare hypocras from red wine. This spiced wine was served as a digestive, but apparently it can also be heated, thickened and served as a sauce.  A recipe for medieval Hypocras can be found here, a seventeenth-century version here.

The recipe given below for salmon in a sweet sauce with red wine is fairly cryptic: “faites sauce” or “make a sauce” is not further specified. That is why I have given three methods to achieve the thickening of the sauce. To thicken a sauce with breadcrumbs or with eggs are ‘oldfashioned’ methods used already in the Middle Ages, the use of a roux as thickening agent was a fairly new method in 1656. The use of sugar and spices are also relics of the medieval cuisine.
More recipes from seventeenth century France: Pea Soup, Jacobin Pottage, Potage à la Reine, Pomegranate salad, French peas, Spinach Pie and Crême brûlée. 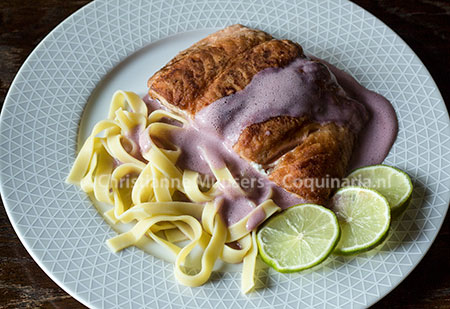 To make the sauce

Put all the ingredients for the sauce in a casserole. Bring to the boil and simmer for fifteen minutes. Put the wine through a strainer. To obtain a sauce, you have to use a method to thicken the spiced wine. The original recipe keeps silent about this. The cooks who read the recipe knew how to thicken a sauce, there was no need to give explicit instructions.
There were several ways to thicken a sauce: bread as thickening agent (A), egg (B), or a roux (C). The first two methods were oldfashioned, medieval techniques. The thickening of sauces with a roux was modern, it is described for the first time in the seventeenth century. However, flour had been used before to thicken sauces.
You can try the different methods, and experience the different aspects to the eye and textures in the mouth that are caused by different ways of thickening a sauce. 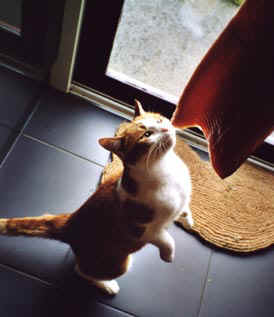 To thicken the sauce

Method A – 2 slices of white bread, lightly toasted, without the crust: Add to the wine in the casserole. Let the bread absorb the wine, then push it through a strainer with the wine.
Method B – 3 raw egg yolks: Stir the yolks, add some of the strained warm wine, then pour the egg yolk with the added wine into the casserole, stirring the sauce continually until it has thickened enough. The sauce must not boil.
Method C – 25 gram butter and 25 gram flour: Melt butter (the butter must not turn brown), add flour, and heat for a few minutes on a slow fire. Then pour in some strained wine, stir until you have a smooth paste without lumps. Add some more wine, stir again, and continue this way until all the wine is used.

Fry the salmon – Sprinkle salt on the fillets of salmon and leave to stand for fifteen minutes. Then pat dry with paper towels. Dust the pieces of salmon lightly with flour. Heat butter in a pan, and fry the salmon for five to ten minutes until they are done.