In the Middle Ages the seeds of the Foeniculum vulgare were often sugar-coated and served with other sweets at the end of a meal, together with hippocras (spiced wine). Fennel seeds were also used in pies, and the leafy part as herb in for example a summer stew with fish. The stalks were prepared as a vegetable, and there are even recipes for fennel blossom. The white bulbous finocchio was developed in Italy in the 17th century. Recipes: Mortadella, Murri, Medieval bread.

As early as in the eleventh century there was a Turkish layered bread, the direct predecessor of filo dough. But it wasn’t until around 1500 that the sheets of dough were rolled to paper thin, even though there had already been written about sheets of dough as thin as grass hoppers wings.
Filo dough is made with wheat flour, water, oil and salt. In commercially produced filo dough starch is also added. The starch makes the dough slightly transparent when it is baked. For these pasties I have been lazy and used filo dough bought from a shop.
When you buy filo dough it’s problaby frozen and has to thaw. Once you start to use it you must keep the dough in foil and/or a moist towel because it dries very quickly.
Just like puff pastry, filo dough is layered. These layers are not from folding and rolling out one sheet of dough repeatedly. De separate sheets are basted with oil or melted butter, sometimes sprinkled with p.a. chopped nuts, and then combined in layers of three to more then fifteen sheets. Then the pastry is deepfried or baked in the oven. Recipe: Medieval Arab pasties.

Or liquamen or garum: a clear liquid made of small fermented fish with much salt and sometimes alsoe several kinds of dried herbs. The Romans used liquamen or garum in the same way we use salt. There is however a difference: salt dehydrates food, liquamen adds liquid to a dish. It was produced in factories and sold in amforas. There were many qualities of garum, from cheap to very expensive. Apicius would no doubt only have used the very best quality. Nowadays in the Far East a kind of fish sauce is still in use in much the same way as the Romans used garum. You can use these sauces as a substitute for garum: Vietnamese nuoc-nam, or Thai nam-pla. You can also try to make your own garum, as the Romans made it at home when they were out of stock (recipe). Recipes: Roman mussels, Roman patina with asparagus and quail, Roman apricots, Roman broccoli, Sacred beans. 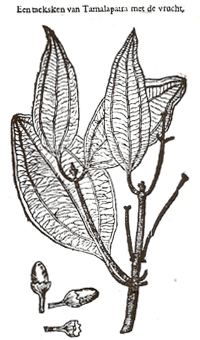 Aromatic leaf of a special kind of cinnamon tree, Cinnamomum tamala. It is still used in the indian cuisine, in some pulaos and byriani. Since it is optional in the original recipe, you can leave it out. Recipe: Roman mussels.