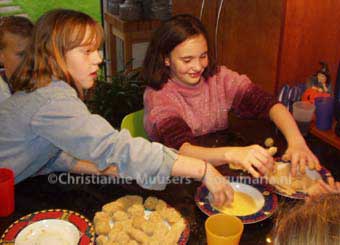 The picture shows my daughter and some of her friends at her birthday party many years ago (in 2002). As part of the festivities they were preparing their own meal, the standard birthday fare for a lot of Dutch children in the past: kroketten, French fries and apple sauce, but everything made from scratch. They loved making the kroketten, especially breading them. They were literally ‘playing with their food’.

They did not realize that they were making something special. However much we Dutch love the kroket, it is now fast becoming an endangered foodstuff. A kroket may be served hot, but it isn’t hot anymore to prepare one in one’s own kitchen. And even its status as junk food is now threatened: other foodstuff as shoarma and pizza are taking its place.

Maybe this recipe gives the kroket a chance to return to the dinner table in all its original glory.

Before the Second World War it was fashionable to serve kroketten, or 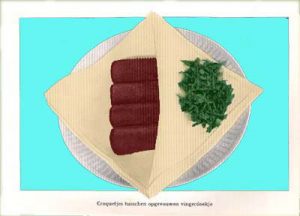 croquettes as the French say, during dinner as a first course. It was also a useful recipe because leftover meat or fish could be used as stuffing. The picture shows how kroketten were served in 1936: on a plate, in a napkin, garnished with parsley.

The Bitterbal, a small Kroket

The name bitterbal, literally ‘bitter ball’, does not indicate that it tastes bitter, but that they were originally meant to be served with a bittertje (a small glass of Dutch jenever, not quite the same as gin).
Bitterballen are still served in bars to accompany alcoholic beverages (like Spanish tapa), or served as finger food at stand-up receptions. To me, the sight of a formally dressed person trying to eat elegantly a still too hot bitterbal whilst holding a glass of champagne is as Dutch as someone letting a herring slide down his or her throat at a fish stall at the market. On this page is a recipe for a rich bitterbal from leftover oxtail meat and mushrooms.

Kroketten – How to make them

First you prepare a ragout. This ragout can be varied upon in many ways. Not only can the main ingredient be different (meat, fish, shrimp, vegetables), but of course the herbs and spices, the used liquid (stock, wine, milk, even plain water), and added ingredients (fried onions, bacon or mushrooms) can be changed too. Then the kroket is breaded and deepfried.
Because I use meat that was used in making stock, here is a link to the page with the basics on stock-making.
For 15 to 20 kroketten or 30 to 50 bitterballen; preparation in advance 30 minutes + refrigerating; preparation 15 minutes. 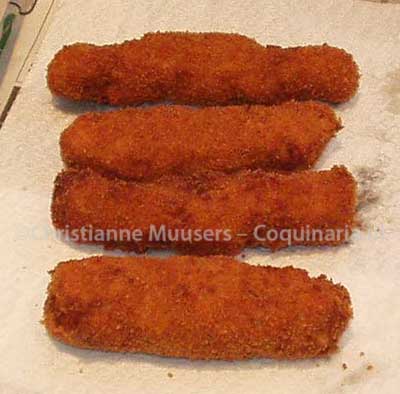 Chop the meat very finely.
Make a roux with butter, flour and stock, but start with sauteing the onion. When the sauce is ready, add meat and spices. Let the ragout cool completely. Keep the ragout refrigerated until use, or freeze it.

Keep the ragout in the refrigerator until just before making the kroketten. Use your hands to form either sticks (about 10 by 3 cm/4 by 1¼ inches) or balls (diametre 4 cm/1½ inches). Don’t make them too large, or they’ll have to be deep-fried too long. If necessary, return the formed kroketten to the refrigerator.It is easier to bread them when they are cold.

For the breading, take three soup plates, put flour in one, stirred eggs or egg whites in the the second, and bread crumbs in the third plate. One by one, cover the kroketten with flour, then eggs, then bread crumbs. Mind that the kroketten are covered all over, otherwise the ragout may leek out when you deep fry them. Return the kroketten tio the refrigerator for thirty minutes.

Heat oil or whatever you use for deepfrying to 180 °C/355 °F. Fry the kroketten to a golden brown, about four minutes. Drain on paper towels.

Serve them really hot. In the Netherlands they are eaten as snack or appetizer, or as the main course with french fries and apple sauce. Or serve them the old-fashioned way, as a first course.
The classic accompaniment to bitterballen and kroketten is mustard. Recipe for medieval mustard

There are countless possibilities. Just remember one thing:

With this in mind you can make kroketten of almost anything. But the ragout must be richly stuffed (for one decilitre of liquid use 110 gram stuffing), and thickened more then you would when making an ordinary ragout.

Meat kroketten – Use any soup meat (beef, chicken), but also veal or lamb, and lovely croquettes are made with sweetbread.

Cheese kroketten – Use milk in making the roux, cheese instead of meat, bring to taste with white pepper, nutmeg, parsley.

Fish kroketten – Use fish fumet, and herbs like dill or chives.

Game kroketten – For these you use a brown roux: Let the butter colour slightly before adding fl;our, keep the fire higher than when making a blond roux, sauté the butter/flour paste a little longer. Use more butter/flour than for a blond roux, 70 gram each for a half litre. Use good (game) stock for the sauce. Additions you can come up with yourself.

Vegetable kroketten – Make a blond roux with milk or vegetable stock, add blanched vegetables like asparagus, broccoli, peas). You can add some cheese, herbs, parsley. Mushroom kroketten are better with a ragout made with meat stock (or the liquid dried mushrooms have been steeped in).

Potato kroketten – These are also served in French cuisine. First the potatoes are boiled and mashed (use for every 100 gram potatoes 1 Tbsp butter and 1 egg yolk, with pepper, salt and nutmeg, and one beaten egg white for all the puree). The potato-stuffing can be varied by adding cheese, herbsd, garlic, onion or whatever is desired. Make small croquettes, bread them and deep-fry them.