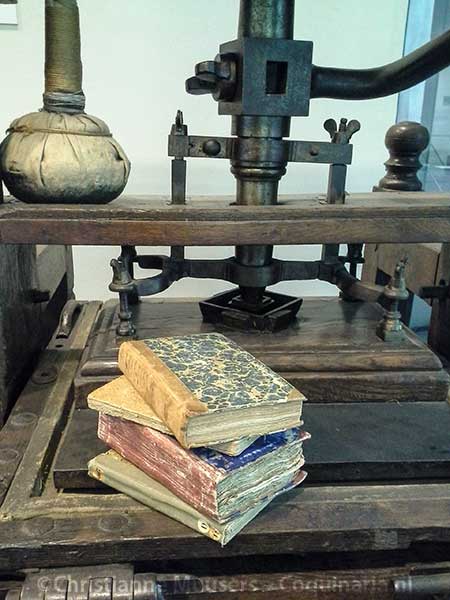 An odd but tasty dish

Recently I published an article in the periodical De Boekenwereld (The Book World) on Roman Catholic recipes in the eighteenth-century cookery book De Volmaakte Hollandsche Keuken-Meid (The perfect Dutch Kitchen Maid). The indirect cause of that article was a recipe I published on Coquinaria a year ago, a Dish for Lent with prunes and raisins. The author of The Perfect Dutch Kitchen-Maid took an important part of his recipes from a Dutch adaptation of the Le Cuisinier François (The French Cook, first published in 1651). This adaptation was first published in 1701 in Amsterdam as De geoeffende en ervaren Keuken-Meester (The practised and experienced Kitchen-master). I mentioned the recipe on this page in De Boekenwereld as one of the recipes that the Kitchen-Maid indirectly borrowed by way of the Kitchen-Master from the French Cook.

Here you can read the original recipe in the three versions. The differences between the versions are not large, but it is interesting to see how the three authors handle this dish. By the way, gooseberries are not in season in autumn (when this recipe was first published). Frozen gooseberries can be bought all year round.

The eighteenth-century dish was meant for fish days. That is to say: it was for Catholics who abstained from meat on Fridays and often one or two other days every week. Fish was allowed, hence fish days, and dairy products were allowed as well. During Lent, between carnival and Easter, dairy products like eggs, milk, cream, cheese and eggs were forbidden, and only fish, vegetables and fruit were allowed. So the recipe with eggs and gooseberries would not have been eaten during Lent.

Le cuisinier François (The French Cook, 1651) by François de La Varenne is the oldest version of this recipe on this page. In his book, he provides the cook with recipes for meat days, fish days, Lent and Good Friday (no meat, no dairy, no fish) in the order in which they were served. The recipe for eggs with gooseberries is in the chapter ‘Oeufs d’entrées’ (eggs as first course) in the part with recipes for jours maigres, fish days. The version of La Varenne is the most extensive and luxurious of the three. Hard boiled eggs are peeled and sliced, fried, and served in a sauce of either gooseberries or verjuice grapes (unripe grapes that are the basis for verjuice), with parsley, spring onion and nutmeg. The tart taste of the fruit is accentuated by a dash of heated vinegar. And if the cooks wants to serve a more sophisticated dish, he can add mushrooms, asparagus or capers. These must be fried separately, because otherwise the extra ingredients will not have been cooked thoroughly enough according to the author. 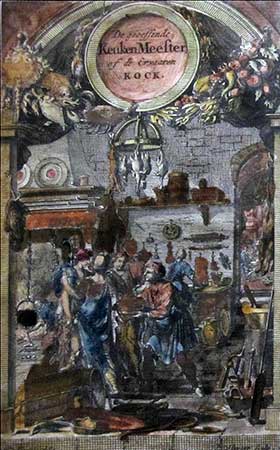 De Geoeffende en Ervaren keuken-meester (The practised and experienced Kitchen-Master, 1701) has gathered all ‘Catholic recipes’ in a separate volume, with recipes for fish days and Lent, sorted by the category of dish (vegetable dishes, fish entrées, egg dishes, fish in the second course, entremets, pasties, three chapters with dishes for lent without eggs, and biscuits and cakes). The Kitchen-Master leaves out the extra options (mushrooms, asparagus, and capers) in his version of the eggs with gooseberries. The spring onion is now simply a regular onion, and verjuice grapes are replaced by verjuice itself. The recipe has clearly been simplified.
The picture on the right is the frontispice of the Kitchen-Master from 1701, coloured by hand..

De volmaakte Hollandsche Keuken-meid (The perfect Dutch Kitchen-maid) from 1746 has no separate section for Catholic recipes: the chapters are ordered in manner of preparation. The egg dish is listed with three other egg dishes under the heading ‘Fish-day Eggs fried for Catholics, how to fry them’ in the second chapter containing recipes for pasties, tarts, roasts, omelettes, puddings and other baked dishes. Either the author of the Kitchen-Maid misread the recipe from the Kitchen-Master, or he decided that a choice between parsley OR gooseberries OR chopped onion was enough. In that case the dish has become a very simple one..

By the way, the combination of eggs and gooseberries is not unique. There is also a recipe for omelette with gooseberries from a late-sixteenth-century Dutch cookbook, the Coc-boeck (cookbook) by Karel Baten.

The recipe at the top is from Le cuisinier François, François de La Varenne (1651, edition Hyman, p. 211, edition Scully p,283), the recipe in the middle is from De Geoeffende en Ervaren keuken-meester (1701, vol.2, p.116) and the third recipe is from De Volmaakte Hollandsche Keuken-Meid (1746, p.46). See the bibliography for more data on the editions). For the recipe of de Cuisinier I have also used Scully’s translation but there are some small differences.

Use reasonably fresh eggs. Not freshly laid, because shelling these will be rather difficult, but also not weeks old because the air chamber will be too large. The eggs must have been turned regularly during storage, to prevent the yolk floating downwards in the white. Or you could use ‘egg sausage’ (although I abhor this). I have chosen to flour the egg slices before frying them for a ‘golden’ colour, even though none of the recipes mention this. I also fry the slices before preparing the sauce in the same pan, because the slices fall easily apart.
First course or side dish foor 4 persons; preparation in advance 10 minutes; preparation 10 minutes. 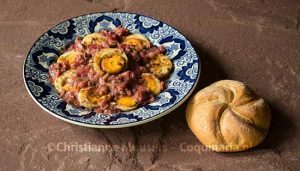 Shell the eggs and slice them. This can very easily be done with an egg slicer, but then you’ll get rather thin slices. If you use a knife for the slicing, take care that the slices remain whole. Flour the egg slices if you want to.
Cut the gooseberries in two.

Heat two tablespoons butter in a frying pan. Fricassée the egg slices on both sides to a golden brown. Remove them from the pan, add the rest of the butter to it. First add the chopped spring onion or shallot, then the gooseberries, parsley and pepper. Simmer until the berries are soft. Mash them with a wooden spatula and remove as many gooseberry skins as you can.
Heat the vinegar in a pan or the microwave, and pour it in the sauce just before serving.

Scoop the sauce onto a serving dish and arrange the egg slices on top. Grate some nutmeg over it and serve.
You can also put the sauce on top, or throw everything together.

Gooseberries (Ribes grossularia) were not cultivated before the thirteenth century, but they are indigenous to Europe. Despite the name, geese do not eat gooseberries. Some say that gooseberries are thus called because of the great combination of gooseberry sauce with fatty meat, like that of goose or mackerel. In the North of France gooseberry sauce was a classic accompaniment to mackerel, a fatty fish (the French call the gooseberry groseille maquereau or mackerel berry).
In the nineteenth century it was believed that the Dutch name kruisbes (litt. ‘cross berry’) was derived from the Finding of the True Cross on May 3rd. But the medieval names stekelbesij (‘prickly berry’) and kroeselbesij (‘curly berry’; the modern word kruisbes is derived from this) indicate that it is the hairy skin that gave the berry its Dutch name (likewise in German: Stachelbeere).