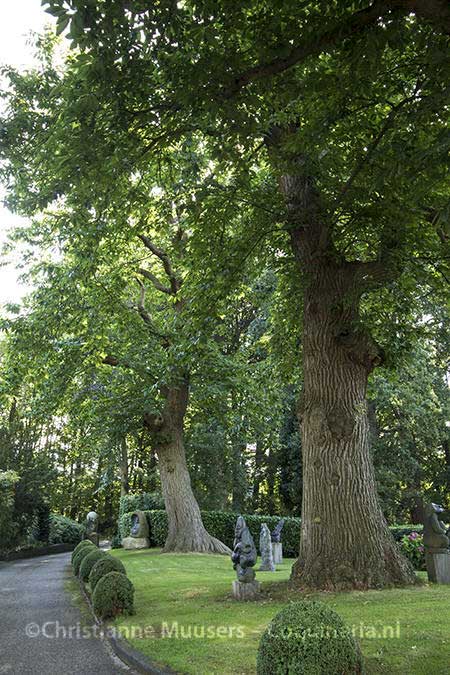 Edible chestnuts were probably introduced in the Netherlands by the Romans. Dutch summers do not always yield ripe chestnuts, but usually enough chestnuts can be gathered under a tame chestnut tree for a nice meal. The picture on the right shows two ancient tame chestnut trees in the beautiful  Beeldentuin De Zanderij in ‘s-Graveland, 20 kilometers from Amsterdam. At the time I’m writing this, they are about one hundred and fifty years old.

The recipe on this page has been published on other websites and in several printed books with Roman recipes. Most of these recipes mainly contain lentils, with a small amount of chestnuts. The source of the recipe is a fourth-century recipe collection that is known as Apicius (who, by the way, is NOT the author!). The recipe can be found in Book V (‘ospreon’, dishes which are rich in carbohydrates), in a chapter with all kinds of Lenticula. Indeed, lenticula means lentils, but also lens and lenticular. Pans or dishes with a round bottom could also be called lenticula. And that is what, in my opinion, is meant here as there is only one recipe in this chapter that actually mentions lentils as an ingredient.

In the same Book V, Ospreon, are sections on pottages (nourishing soups) containing ripe green peas, fava beans, conchicla (shell-shaped dishes), fenugreek, barley and chick peas. With the exception of the section lenticula  all recipes mention their main ingredient. In a comment on the translation of the recipe for chestnut puree Grocock and Grainger also mention that they suspect that this particular dish probably did not contain lentils at all. Chestnuts were the main ingredient.

The nutritional value of edible chestnuts differs from that of other nuts. Chestnuts contain less fat and proteins, but more carbohydrates. They also contain folic acid. Unfortunately, I cannot provide exact numbers, because no two sources give the same numbers and percentages.

Throughout the centuries wild edible chestnuts have been an important source of calories in poor regions of Southern Europe. Large, cultivated edible chestnuts were luxurious food. Whether eaten with Brussels sprouts, with roasted turkey, or just ‘by an open fire’, chestnuts were a treat and not a necessity. I also published eighteenth-century recipes for Kale with chestnuts and Chestnut pie.

The recipe can be found on pp. 208/209 in the edition and translation by Grocock and Grainger (see bibliography). I have used their translation, but changed the name of the recipe from ‘Lentils with chestnuts’ to ‘A dish [in the form of a lentil] with chestnuts’.

This is definitely a very tasty dish. Vinegar and mint make it refreshing, while the fish sauce provides a subtle salty taste.
Rue has a noticeable, slightly bitter taste. Replacing it by another herb is not really an option. If you can not find any fresh rue, just leave it out because dried rue is not nearly as fragrant. However, it is possible to freeze fresh rue, so frozen rue could be used in the recipe as well.
Silphium root is part of a plant that became extinct during the first century AD. By the time the manuscript of De re coquinaria was originally written (fourth century AD), it had been unavailable for three centuries. Asefoetida and garlic were used instead.
Filling side dish (substitute for bread) for 4 personsn; preparation in advance 15 minutes + optionally cooking and peeling of chestnuts; preparation 10 minutes. 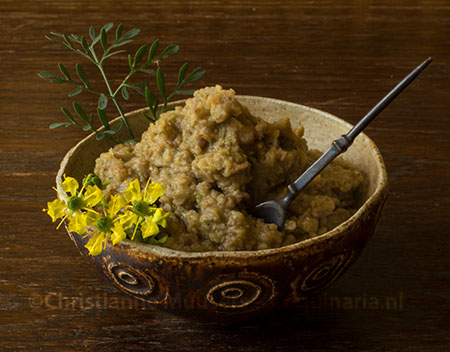 Prepare the chestnuts as described here, or heat precooked chestnuts. Purée the chestnuts while still warm, in the same manner as one would make potato mash.
Grind the spices, chop the herbs.

Temper spices and herbs with garlic, garum or fish sauce, and vinegar. Add this to the mashed chestnuts with enough hot water to make a creamy purée. You’ll need about three tablespoons of water.
Reheat the purée just before serving, either on a slow burning pit or in the microwave or oven. Stir in the olive oil just before serving.

This chestnut purée is served as a side dish during a Roman meal. Its nutritional value is about the same as bread or any other dish that consists mainly of carbohydrates.

There is a difference between natron (sodium carbonate, E-number 500(i)) and nitron (saltpeter or potassium nitrate), but in Antiquity that difference was not clearly defined. Let’s just assume that it was sodium carbonate that was used to prevent the skins of legumes becoming hard and to keep boiled cabbage green. The E-number 500 (ii) is sodium bicarbonate, also known as baking soda.
The chestnuts have already been peeled in the original recipe. It could be that nitron is mentioned erroneously, and that originally unpeeled chestnuts were used. The nitron would then have been added to the boiling liquid because this makes chestnuts easier to peel. 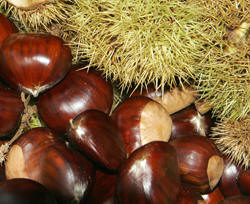 These had the same role as groats and potatoes: carbohydrates. In some regions of France sweet chestnuts (Castanea sativa) were common fare, like in the Ardèche and the Cévennes. Chestnut meal was also used, to make bread or wafers.
In the Netherlands the climate is too cold to be able to harvest the fruit from sweet chestnuts on a regular basis. Here, the horse chestnut  (Aesculus hippocastanum L.) abounds, but the fruit from these trees is too bitter for consumption. Sweet chestnuts are recognizable by their prickly husks (see picture on the left), the husks of the horse chestnut are smooth with little points.

A little shrub (Ruta graveolens), indigenous to Southern Europe. The odiferous plant has a strong, bitter taste. The ancient Greeks and Romans loved rue, and it is still used in the Italian drink Grappa Ruta. In modern cuisine rue has mostly fallen into disuse, which is a pity. A few rue leaves in a meat broth add a pleasant flavour. However, it is thought to be an anaphrodisiac (quenches lust), and pregnant women must be careful not to use too much of it, because it could also be abortive. But a leaf or two won’t do any harm.
Rue plants can be found at garden centers. It is quite decorative, a semi-perennial with small yellow flowers that can be used to decorate any dish.