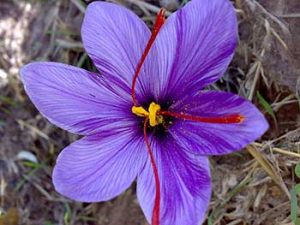 The orange-red stigmas of a crocus. In medieval times (as in modern times) it was used to colour dishes yellow. If you want to have the most effect of the colouring, crush the dried stigmas in a spoonful of hot liquid (water, milk, broth, vinegar, whatever is most fitting for the recipe it is used in). Recipe: Fake fish (medieval apple pie), Genestada.

– A decorative perennial evergreen, Salvia officinalis. If you have the use of a garden, be sure to plant one! You can pick the leaves all year round. Classical combinations are with chicken livers, with onions as a stuffing for pork, and in several egg dishes. Be careful, the taste can become overbearing.
Originally sage was used as a medicine (as the Latin name shows), but by the Late Middle Ages sage also became an ingredient in recipes for food. Recipes: Stuffed eggs, Medieval Goose, Medieval stuffed eggs, Coloured, stuffed eggs.

Yes, it is wood! Red (from Pterocarpus santolina) and yellow or white (both from Santalum freycinetianum) wood dust from fragrant sandal trees were used as food colouring in medieval and early modern Europe. Before tomatoes and red bell peppers were introduced in the European kitchens, it was difficult to give your dishes a red colour, so red sandalwood was used especially. You can buy it as wood chips, but for colouring you need the fine, deep red powdered wood. Sandalwood is also used in scents and incense. Recipe: Pyke in galentyne, Coloured, stuffed eggs, Red Mustard.

Meditteranean sesame oil is pressed from raw seeds, chinese sesame oil is pressed from toasted seeds, resulting in a stronger flavoured, darker oil. So take care that you use the right sesame oil. If you find the taste of Chinese sesame oil too overwhelming, you can temper it with a neutral oil. Buy a small bottle of sesame oil, the taste deteriorates once the bottle is openend. Recipes: Spicy meat balls, Medieval Arab pasties, Meatballs in aubergine sauce, Hot-smoked cod with cilantro-mustard sauce.

During antiquity, the Roman (and Greek) cuisine used some ingredients that have since fallen into disuse in European kitchens. Of these ingredients the seasoning silphium or laserpicium is the most intriguing. The plant bore some resemblance to fennel. The tastemaker was resin, produced from the roots and the stem. The silphium–herb grew in Libya in the wild, but it was never cultivated. because of excessive harvesting and abuse of the land, less and less silphium was growing. The fate of the last shoot of silphium is described by Pliny the Elder in the Historia naturalis (19:15) from 77 AD. When silphium became extinct, Romans began to use another plant that resembled silphium but with a less subtle taste. This was asafoetida. In Asian stores you can buy it as heeng or hing. The Dutch name of the plant is duivelsdrek, devil’s dung, and not without reason. The pungent reek is very strong and unpleasant: a mix of raw onions, raw herring and garlic. If it is not stored very carefully, the whole house will be permeated with its reek. I keep my asafoetida wrapped in plastic inside a plastic container that itself is wrapped in plastic and put in a larger plastic container. And I still get a whiff of it when I get close.
Silphium was very expensive, as was asafoetida. Garlic was the poor man’s silphium. So, if you do not want to use devil’s dung, just use that instead. Recipes: Roman barley soup, Chestnut Purée.

There are several varieties, like the common sorrel (Rumex acetosa) and the French sorrel or oseille (Rumex scutatis). The leaves taste more or less sour, depending on the amount of sunlight (more sun means more sour). Sorrel grows in the wild and chances are that when you have a garden, it will turn up unasked for. Don’t dig it up root and all, just cut of the leaves and use them in the kitchen, in salads or boiled as vegetable. However, do not eat it in great quantities or too frequently, because of the high content of oxalic acid. When sorrel is boiled the colour changes to a greyish green. Recipes: Herb soup with potato dumplings, Chicken with spring vegetables.

Spelt is a grain. This grain flourishes best on poor ground, with no pesticedes. That is why less and less spelt is being cultivated since the beginning of the twentieth century. It is an uneconomical crop. Apicius names spelt several times in his recipes. You can buy spelt flour (at least in the Netherlands) in organic foodshops. Recipe: Roman bread.

In the Netherlands you can buy the spices for speculaas premixed. I doubt whether that is the case elsewhere in the world. So here you have a mixture to make yourself: Take cinnamon, nutmeg, cloves, white pepper, ginger and cardamom (everything powdered) in a ratio of 8:2:2:1:1:1 (whether you use grams, teaspoons or tablespoons, the proportions must be the same). The used spices betray the age of the recipe for speculaas: this combination of spices can be found in many fifteenth century recipes. Recipe: Speculaas with rich almond filling.

The strawberries we eat today are varieties from American (North and South) strawberries. These were introduced in Europe in the seventeenth century. If you want to make an authentic medieval dish you should use small European wood strawberries. They are difficult to find and rather expensive once you have found them. I tried to find some wood strawberry plants in garden homes to grow in my garden, but even there they are difficult to find.
Wild strawberries are smaller than ordinary strawberries, they smell delicious and taste even better. They are really worth your while to try and find them! However, if you do not succeed, use modern strawberries instead. The dish will be just as pink and almost as tasty (however, first sample a strawberry, because some strawberries only taste of water). Recipe: Strawberry pudding.

This is fermenting grape juice. When ripe grapes are pressed, the juice will ferment (through natural or added yeast). Must can’t be kept in a closed container, the gasses must be able to escape. When the first, hefty yeasting is over the must will ripen into young wine. Must is only available just after the grapes are pressed after the harvest, for a short period. I once drank it in october in Wallis (the wine province of Switzerland). It was frizzy and refreshing in taste. Recipes: French mustard, Red Mustard, Verjuice. See also Chicken with redcurrant sauce.

This cooking fat is hardly ever used in Dutch cuisine. Suet is the firm fat around the kidneys and loins in beef, but there is also suet from veal and mutton or lamb. Its use is more common in the English cuisine, to make mince pies and suet puddings. See also Tallow. Recipes: Meatballs in lettuce, Strawberry pudding, Capon with caper-sauce, Black salsify fritters, Chicken with spring vegetables.

We buy our sugar mostly granulated or powdered, but in the past sugar was sold as cone-shaped sugarloaf. Before using it, the sugar had to be grated on special graters. Before 1600 all sugar was cane sugar. I don’t know whether it is the same everywhere else, but in the Netherlands cane sugar is always light brown, either from added molasses, or from not being 100% refined. Refined cane sugar is as white as refined beet sugar. Unrefined brown sugar may contain small traces of minerals and such, but nothing you don’t get by consuming your ordinary daily food. However, there is a slight difference in flavour, brown sugar has more taste.
The sugarloaves on medieval miniatures are white, not brown. The cane sugar was as refined as possible. If you want to prepare medieval recipes the authentic way, you’ll have to use white, refined cane sugar. If you can’t get that, you’ll have to choose: either use unrefined cane sugar which has a slightly different flavour and can end up colouring the prepared dish in an unintended way, or use refined beet sugar which has the same flavour and colour as refined cane sugar, but is actually an anachronism. 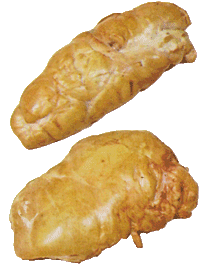 This is offal, a gland which is present in young animals and humans but shrivels when they get older. Especially sweetbread of veal and lamb are eaten. In the Netherlands sweetbread is one of the most expensive kinds of meat. It used to be recommended for the weak and ill because of the white colour and soft texture. Like liver, sweetbread is rich in cholesterol.
Preparation: Sweetbread must be prepared as freshly as possible. First steep them in cold salted water, about one hour. Refresh the water a few times. Then bring to the boil with fresh water with salt, and take the sweetbreads out as soon as the water boils. Rinse them under the cold tap. Remove membranes and hard pieces. To make sweetbread firmer, you can now keep it under light pressure for an hour, allowing the excess moisture to drain away. This is especially advisable if you want to fry (breaded) sweetbread. Recipe: Pasties with sweetbread.

Or Xanthoxylum piperitum. You can’t use black or white pepper instead of this Chinese pepper, the peppercorns have a decidedly different taste. They are often roasted before use. Recipe: Chinese Stock.