A vegetarian recipe from the seventeenth century 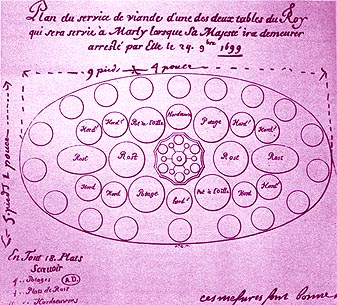 This recipe for a nutritious soup made of split peas dates from the era of Louis XIV, the French Roi Soleil. The soup is meatless, and fits in a vegetarian diet.

Potage was served during the first course of a meal. Often a thick slice of dry or toasted bread was placed on the bottom of the soup bowl. This bread was first steeped in broth. Then the potage was poured over it, and the bread thickened the soup. However, in this recipe no bread is being used. You won’t miss it, the soup is nutritious enough as it is.

Potage was not the only dish that came to the table during the first course. The table was covered with symmertically positioned dishes with various contents (see picture). For the second course everything on the table was replaced by new, different dishes. This way of serving a meal was called service à la française. This way of serving food was not changed until the nineteenth century, when the service à la russe became popular. This meant that the different dishes were no longer placed at the same time on the table. Instead, the dishes were served one after another. This way of serving is what we still do today. The service à la françaisecould be compared to a buffet, but placed on the dining table, around which the host and his guests were seated. The potage could be served at the same time as roasted quails and boiled artichokes. See also the recipe for kale with chestnuts and groats.

Since the end of the Middle Ages there were many reprints and new compilations of old works, but no really new cookbooks were written. In the middle of the seventeenth century this changed. The first innovating cookbook was Le cuisinier françois, written by François-Pierre de la Varenne (1651). It was very succesfull, and within a couple of years it was translated in English and German (but not in Dutch). The culinary developments went on: in 1674 the anonymous L.S.R. fulminates against the hopeless oldfashionedness of La Varenne in the introduction of his L’Art de bien traiter.

The books that were published after Le cuisinier françois were not merely cookbooks, but manuals for the maître d’hotel. In L’Art de bien traiter one can find instructions on how to organize a meal in a cave, on the water or in the garden. Very few recipes can be found in La maison reglée from Audiger (1692). This book explains the duties of al manner of servants in the house of a “grand seigneur”, be that in town or in the country. An example: “A kitchen maid must start in the morning with cleaning and sweeping the kitchen, sprinkle water everywhere, put away and clean the kitchenware; wash the silver tableware thoroughly and clean it with bran water and scour it when necessary with the ashes of hay, without using scouring powder or fine sand; because the ash of hay is sufficient to let sparkle if one knows how to use it. To remove stains which are sometimes on the tableware because of eggs, one must moisten the dishes and put in dark ash (? cendre rouge), let it rest, and then scour. This removes the stains without them reappearing. She must also sweep the dining room every day and the grand stairs, clean the herbs well and do other small duties, and go everywhere where she is sent.” (edition p.481).

This recipe is taken from Le cuisinier françois méthodique (anonymous), Paris, 1660, published in La gastronomie au Grand Siècle.100 recettes de France et d’Italie by F. Sabban and S. Serventi (p.126). I have not yet seen the entire cookbook, but that will happen in the future.

When reading the original French recipe one may have wondered about the translation of ‘chicorée blanche’ as ‘endives’. Because chicorée blanche, isn’t that chicory or Belgian endive? Yes, in our days, but not in the seventeenth century. Originally chicorée blanche indicated endive with light coloured leaves. It wasn’t until the end of the nineteenth century that endive was raised without daylight, under the soil or indoors, with compact, creamy-white bitter endive as result. Since the recipe on this page is from the seventeenth century, just use the lighter leaves of ordinary endive.
First course for 8 persons (2 liters soup); preparation 90 minutes. 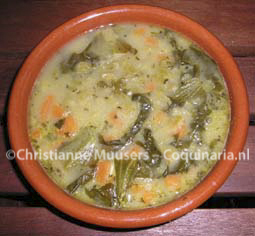 Bring water to the boil. Add the split peas, bring to the boil again. Pour the water off and rinse the peas under the tap. Take fresh water, two litres/quarts (or 4 pints). Bring this to the boil with split peas and butter. Add the carrots after 30 minutes. Add the herbs, onions and cloves after another 30 minutes. Simmer until the peas have broken, stir once in a while.

At once. When you make this soup in advance and want to reheat it, add some water. The soup must not become too thick.