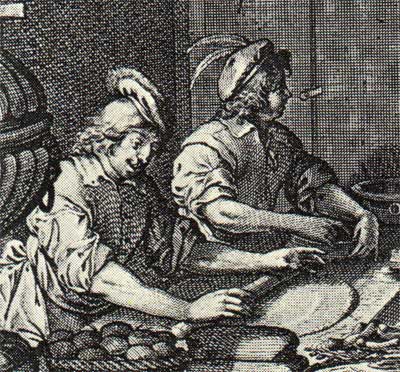 The Apple Pie of Hannah Glasse (The Art of Cookery made Plain & Easy, 1747) is prepared with a puff paste-crust. John Farley (The London Art of Cookery, 1783) has the same recipe as Glasse, but with a difference: Glasse rolls up the dough, Farley folds it. Both writers prescribe rolling out the dough seven or eight times. After eight times the dough will have no less than 512 layers! In the hot oven the enclosed water will evaporate and the air will expand, and so the layers will separate. Use a very sharp knife to cut your dough, otherwise the layers will stick together at the edges, and the dough will not rise evenly.

Puff pastry may be a descendant of filo dough, which was first used by Arab and Turkish cooks (see the recipe for medieval Arab pasties with eggplant and spinach stuffing). In the revised edition of On Food and Cooking (2004), Harold McGee mentions an early version of European puff pastry in The English Housewife (1615) of Gervase Markham. Here the dough is neither folded nor rolled up, but several sheets of dough are stacked with butter between them and then rolled out.

On the picture is a detail of an etching by the French artist Abraham Bosse (1604-1676), The Pastry Shop. Here you can view the complete etching, and here are more dough recipes.

For my adaptation of this eighteenth-century recipe I have used the ingredients and proportions of Glasse, but followed the method of Farley. So, I used half as much butter in the flour and added salt, but I folded the dough instead of rolling it up.
And just in case English speaking people are as confused as many Dutch speaking people: when I write butter, I NEVER mean margarine. Use plain, unsalted real butter, made from milk, which has not been altered to make it easily spreadable on bread or anything.
For 2 pounds puff pastry; preparation 5 hours, with between the 8 times rolling out the dough a 30 minutes break. 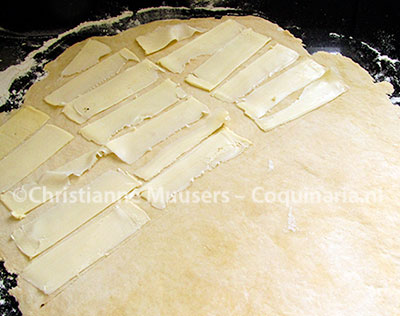 Cut 150 gram (5 ounces) cold butter in small pieces and crumble them into the flour. That will take a while; the butter pieces should not be larger than a pea. This is what I do: I slice butter that comes straight from the refrigerator in thin slices, a few millimeters or a tenth of an inch thick. These I dip in the flour that is already in the bowl for the dough, then I cut the floured slices of butter into small strips on a cutting board, and these into cubes. The dusting with flour prevents the butter pieces sticking back together after cutting. The butter cubes are added to the flour, and I make them even smaller by using a thingy I do not know the name of. I am not even sure it is meant for this, maybe it is a kind of whisk (see picture above).

Then add cold water, start with one and a half deciliter (3/4 cup). Mix flour/butter and water, and continue adding water until it has the consistency of dough. How much water is needed exactly is hard to tell. It depends among other things on the freshness of the flour. The dough can also be prepared using a kitchen machine with dough hooks to knead, but take care not to knead the dough too much; the butter pieces must remain visible. Using hands instead of a machine also has the advantage of feeling whether the dough is too wet (sticky, add flour) or dry (crumbly, add water). Wrap the dough in plastic foil and refrigerate for an hour to let the butter get firm again.

Sprinkle the worktop with flour, sprinkle some flour on the dough too, and roll it out to 4 mm (1/6 of an inch). Do not roll in one direction only, also crosswise, and try to end up with a rectangular sheet of dough. Cover half the sheet with thin slices of butter, sprinkle a little flour over them, and fold the other half over. Roll out, once more cover half the sheet with slices of butter, fold again, roll out once more, and fold over again. Wrap in plastic foil and let the dough rest for half an hour in the refrigerator between turns. Roll out and fold several times. Wrap the dough sheet in foil and keep in the refrigerator, or freeze it, until use. It seems a lot of work. But during the resting time of the dough you can do all kinds of other chores.
TIP 1 – Use a peeler to slice the butter. This works best if you use cheap butter (which is firmer) that comes straight from the refrigerator.
TIP 2 – To keep track of how many times the dough has been rolled, just press the tips of your fingers in the dough. Make as many dimples as times the dough has been rolled out.

How to keep the dough

After the last turn the dough can be frozen, wrapped in plastic foil. I divide the dough in portions of 250 and 500 gram. When it is going to be used, take the dough out of the freezer 24 hours in advance and let it thaw in the refrigerator. Once thawed, the dough must not be frozen again (the same goes for all food).

The imperial pound is lighter than the metric one, about 450 gram instead of 500 gram.