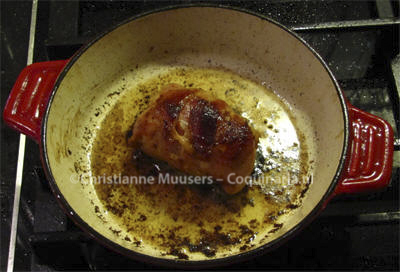 This meat dish is typically Dutch. I have not been able to find an exact translation of the name slavink, which derives from slagvink, a singing finch. Some Dutch/English dictionaries translate it with kromeski, but since that is dipped in batter and deep-fried, it is not the same dish. If you want to know how to pronounce slavink, follow this link.

What exactly is a ‘slavink’? 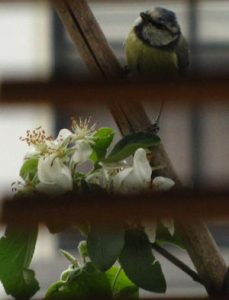 This old-fashioned Dutch meat-dish is just an oblong meatball, wrapped in bacon and fried in butter or lard. Originally the bacon was wrapped around a small bird. Small songbirds are still on the menu in Southern Europe, despite attempts to outlaw the custom of eating them. Several Dutch cookbooks from the eighteenth and nineteenth centuries list recipes for grilled songbirds. In the Nieuwe vaderlandsche kookkunst (New patriotic culinary art) from 1797 a predecessor of the modern slavink can be found: ‘Rollen van varkensvleesch, met vogelen’ or ‘Rolls of pork with birds’ (pp.51/52): flattened fillet of pork is covered with bacon, salt and spices and rolled around a thrush. According to the site of the Dutch quality butchers keurslagers, the vink was invented by Belgian and Dutch butchers at the end of the nineteenth century. The slavink was composed by butcher Boerwinkel in Hilversum in 1952, later another butcher named Spoelder thought of the name slavink, ‘because it tastes so good with lettuce’. Lettuce in Dutch is sla.
The stuffing of the modern vink is ground meat which is formed as an oblong stave. The blinde vinkconsists of ground beef or veal, rolled in a flattened fillet of respectively beef or veal. The slavink is made with ground pork and wrapped in bacon. Too much fat? Just enjoy it, and compensate the day after by eating something that is low in calories. But please, choose food that is naturally low in fat, like fish (the fattest fish has less calories than the most meagre meat), and not something that has been artificially been transformed to become light. If you poach or grill the fish, you have compensated enough for the ‘fat finch’.
By the way, the bird on the picture is not a finch or thrush, but a blue tit that is picking lice off the apple trees in my front garden.

If a butcher makes slavinken (the plural of slavink), they make not just a few, but a lot. The recipe below is for two pounds of ground meat. Luckily the slavink can be frozen. To two pounds of ground meat just one whole egg is added. So if you make less, use half an egg for one pound meat, and a quart egg (about two tablespoons) for a half pound of meat. If you use more egg, you’ll also need to use more bread crumbs; otherwise the meat will be too mushy. You can make your slavink as large or small as you like. This also depends on the size of the slices of bacon. Because of the fat in the bacon, you’ll need to add very little (if any) butter to fry the slavink. If you click on the picture, you can see a step-by-step guide on how to ‘build’ a slavink.
For 16 to 20 slavinken; preparation in advance 40 minutes (to make all vinken); preparation 15 minutes. 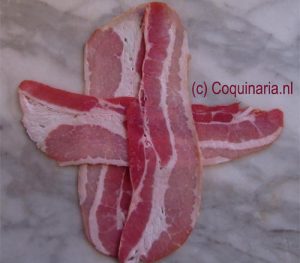 1 kilo (2 pounds) ground pork or half pork, half beefgehakt
300 gr white bread (12 slices without crust)
1 egg
pepper, nutmeg to taste
salt (be careful, bacon is also salty)
For each Slavink
3 long slices of streaky bacon
To fry
butter or lard (if necessary, because fat from the bacon will also melt)

The stuffing – Cut the crusts off the bread, and steep the slices in cold water for five minutes. If you use ready-bought dried breadcrumbs (chapelure), the result will be less tasty.
Break the egg above a bowl, and add pepper, nutmeg and salt.
Squeeze the bread very firmly, and combine this with the egg, using a fork.
Add this mixture to the ground meat and knead until well blended. Kneading by hand gives the best result. But remember to wash your hands and clean your nails beforehand as well as afterwards.
The slavink – Place one slice of bacon on the worktop. Place the second slice crosswise, and the third slice next to the first one. Just look at the picture if you’re confused. Make oblong, straight forms of the stuffing, as long as the width of two slices of bacon. Place the stuffing in the middle across the two slices, on top of the third one. Fold one end of the two slices over the stuffing, one from above, one from the other side. Then fold the ends of the crosswise slice of bacon over the stuffing, and do the same with the remaining ends of the other two slices. Click on the picture or here, and you’ll see it all explained in pictures.

Fry the bacon in butter or lard. You don´t need much fat, because the bacon-fat will also melt. I use a cast iron casserole for frying rather than a non-stick pan many people seem to prefer. It may be my imagination, but the meat and its juices are tastier. First melt and heat butter or lard, and add the slavinken. Fry them for a minute, turn them and fry for another minute. Then temper the heat, cover the pan, and fry for four to six minutes. Turn the slavinken again and fry four to six minutes on the other side. Because of the saltpetre used in the bacon, the stuffing may remain pink. This does not mean that the meat is not done yet. When in doubt, use a meat thermometer (core temperature should be at least 70 °C/160 °F) or slice a slavink open to check the stuffing.
Add some water or milk to the remaining fat in the pan, heat it while stirring, and serve this simple gravy with the slavink.

The slavink is excellent with this stamppot (another Dutch dish). A Dutch songwriter, Hans Dorrestijn, wrote an ‘Ode to the slavink’ in which he recommends serving it with fried onions and mushrooms.

If you have prepared a LOT of slavinken and want to freeze them, it is best to wrap the slavinken individually in plastic foil before putting them in freezer bags or boxes. On the sticker you write what is in it and when you prepared and froze it. Pork keeps at least three months in the freezer. If you want to fry them, let them thaw slowly: take them out of the freezer at least twelve hours in advance. Do not fry them before they are completely thawed.

Blinde vink (‘blind finch’) – The stuffing is made with ground beef, and instead of bacon very thin slices of beef are used, which are fixed with kitchen twine.
Kalfsvink (‘veal finch’) – The same as the blinde vink, but with ground veal and veal as wrapping.
Fantasy finch – The recipe on this page is a basic recipe. You can alter the stuffing by using other meat (lamb, salmon, tuna, pike, hare), or adding ingredients (onion, garlic, cheese, herbs, spices). The wrapping could be slices of smoked salmon, prosciutto, zucchini, or aubergine. When you stray that far, you might as well consider these finches variations on Italian cannelloni.
Meat ball – Prepare the stuffing. Make balls. Forget the bacon wrapping.