This dish, boiled potatoes and uncooked endives mashed together, was the favourite dish of my mother. We still prepare it on her birthday and her date of death (twenty years ago). So, for my family and me this is an emotional dish. My mother preferred meatballs with it, but I usually serve it with slavinken. Other versions of this stamppot use purslane or turnip greens instead of endives. In winter kale is used for the most iconic of Dutch dishes.
On my site I repeatedly call for real, home-made stock instead of stock cubes. But in a dish like this I do use cubes instead of salt to add to the boiling potatoes.
Main dish for 4 persons; preparation in advance 15 minutes; preparation 25 minuts. 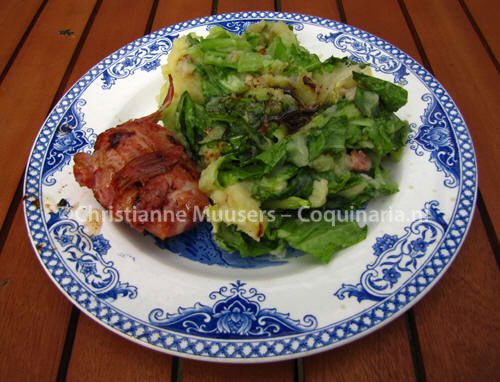 Peel the potatoes and cut them in pieces of about the same size. Chop the onion and bacon.
Rinse the endives. If it does not have too much earth between the leaves, I simply dip the endives a few times in water before cutting. If there’s a lot of earth in it, I cut the endive first and rinse afterwards. How small you make the strips of endives depends on what you like. I prefer coarsely cut (see picture), but no doubt many people will prefer small strips. Because that is the way you buy packaged endives at the supermarket.

Put the potatoes in a pan that is large enough to contain the endives too after boiling. Add enough water to just cover the potatoes, and the quartered stock cube. Do not add salt, the stock cube is almost all salt anyway. Bring to a boil and temper the heat, cover the pan but allow the steam to escape. Leave on the fire for fifteen to twenty minutes, depending on the size of the potato pieces.
Meanwhile, heat the chopped streaky bacon in a small skillet, and as soon as the fat has melted, add the onion. If the bacon was not fatty enough, add some butter or lard. Put a lid on the skillet and leave the bacon and onion on the lowest possible heat until the stamppot is ready. 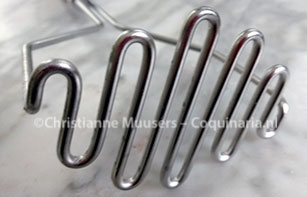 Check whether the potatoes are ready by pricking them with a fork. If there is no resistance, the potatoes are done. Pour the remaining water off into a bowl. Take one cup from this, or 2/3 cup cooking liquid and 1/3 cup milk, and heat this until boiling point.
Mash the potatoes with a good masher, then add the raw endives. Pour over half of the hot liquid and continue mashing, or use a wooden spoon to bruise the vegetables. The endives will shrink because of the heat. Finish with adding the fried bacon and onions or onions and cheese, and freshly ground black pepper.

With meatballs or slavink, or braised or stewed meat. Put a salt cellar on the table for the natrium addicts.
Personally, I do not eat this stamppot with gravy, but you can serve it if you like. As long as it is real gravy from your own kitchen, and not from a bottle of carton!

It is possible to reheat this stamppot, but the charm of dish dish is that the endives are not completely done, but just a little. That is why freezing is not an option for this stamppot (other stamppotten in which the vegetables are cooked with the potatoes can be frozen quite well). Reheating will reduce the endives even more. But throwing leftovers away, that would be a shame.