A nourishing recipe from the first century AD 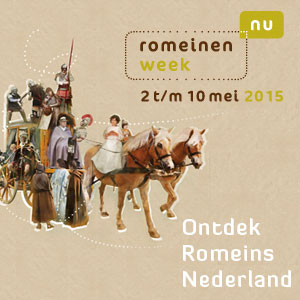 Hadrian’s Wall is the iconic heritage monument of Roman presence in Britain. It still determines the border between England and Scotland. The remains of Romanpresence in the Netherlands are less obvious, but the Dutch are becoming more and more aware of this part of their own heritage. Nowadays there is even an annual ‘Roman week’ at the beginning of May, with many activities that focus on ‘what the Romans did for us’ (or ‘to us’). I received a request from the organisation: would it be possible to publish a Roman recipe on my site? Yes, of course it would!

The recipe that caught my attention was Tisana vel Sucus, a ‘drink’ containing barley that is actually a rather nourishing soup. For me this was an obvious choice, since I had recently published two nineteenth-century recipes for barley soup, a Dutch and a French version. It is interesting to compare these soups with the Roman one on this page.

Tisana vel Sucus is a recipe from the Roman cookery book De re coquinaria, also known as Apicius. This collection of recipes has probably been put together in the fourth century AD, but a good part of these is a great deal older. Those are the recipes that entail the use of silphium, because this ingredient has been unavailable after the plant became extinct during the first century AD. The recipe on this page contains silphium, so it must be one of those older ones.
More on the cookery book can be read in the recipe for mussels. An overview of Roman recipes on Coquinaria is here.

Silphium – Picked out of existence 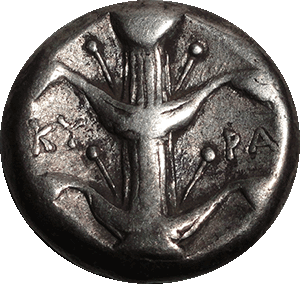 During antiquity, the Roman (and Greek) cuisine used some ingredients that have since fallen into disuse in European kitchens.
Of these ingredients the seasoning silphium or laserpicium is the most intriguing. The plant bore some resemblance to fennel. The tastemaker was resin, produced from the roots and the stem. The silphium–herb grew in Libya in the wild, but it was never cultivated. because of excessive harvesting and abuse of the land, less and less silphium was growing. The fate of the last shoot of silphium is described by Pliny the Elder in the Historia naturalis (19:15) from 77 AD.

“For these many years past it has not been found in Cyrenaica, as the farmers of the revenue who hold the lands there on lease, have a notion that it is more profitable to depasture flocks of sheep upon them. Within the memory of the present generation, a single stalk is all that has ever been found there, and that was sent as a curiosity to the Emperor Nero. If it so happen that one of the flock, while grazing, meets with a growing shoot of it, the fact is easily ascertained by the following signs; the sheep, after eating of it, immediately falls asleep, while the goat is seized with a fit of sneezing.” (Bibliography))

When silphium became extinct, Romans began to use another plant that resembled silphium but with a less subtle taste. This was asafoetida. In Asian stores you can buy it as heeng or hing. The Dutch name of the plant is duivelsdrek, devil’s dung, and not without reason. The pungent reek is very strong and unpleasant: a mix of raw onions, raw herring and garlic. If it is not stored very carefully, the whole house will be permeated with its reek. I keep my asafoetida wrapped in plastic inside a plastic container that itself is wrapped in plastic and put in a larger plastic container. And I still get a whiff of it when I get close.
Silphium was very expensive, as was asafoetida. Garlic was the poor man’s silphium. So, if you do not want to use devil’s dung, just use that instead.

Garum or liquamen is another ingredient of Roman cuisine that fell out of use during the Middle Ages. It is a sauce made of fish that has fermented in salt or brine. It can be substitued by modern Asian fish sauce, but the taste is not quite the same.
More on Roman fish sauce is on this page. There is also a recipe to make your own simple garum.

The source of the recipe-text below is the beautiful edition Apicius by Grocock and Grainger from 2006, recipe 4.4, pp 198/199 (see bibliography). I modernized the use of u/v and capitals in the Latin text. I have also used the English translation of Grocock and Grainger.

Tisanam vel sucum.
Tisanam sic facies: tisanam lavando fricas quam ante diem infundes. Inpones supra ignem calidum; cum bullierit mittes olei satis et aneti modicum fasciculum, cepam siccam, sautureiam et coloefium ut ibi coquantur propter sucum. Mittes coriandrum viridem et salem simul tritum et facies ut feruerat; cum bene ferbuerit, tolles fasciculum et transferes in alterum caccabum tisanam sic ne fundum tangat propter conbusturam. Ligas et colas in caccabolo supra acronem coloefium. Teres piper, ligusticum, pulei aridi, modicum cuminum et silfi frictum; ut bene tegatur suffundis acetum defritum liquamen, refundis in caccabum, sed coloefium acronem facias ut feruerat super ignem lentum.
Barley soup or liquor
You make barley soup like this: soak barley overnight and wash and rub (it free of husk). Put it over hot coals (in a pan). When it is boiling, add sufficient oil and a small bundle of dill, dried onion, savory and a knuckle ham bone so they may cook there to produce a liquor. Put in green coriander and salt, which have been pounded together. Bring it to heat; when it is simmering well, take out the bundle and transfer the barley soup to another pan, making sure that the bottom of the pan does not touch (the coals) and so burn: you smooth it and strain it into the pan, over the top of the ham bone. Pound pepper, lovage, a little dried pennyroyal, cumin and pounded silphium; so that it is well covered, pour on vinegar, defrutum, liquamen; pour back into the pan; but bring the ham bone to heat over a slow fire.

This recipe contains several unclear passages. For example: why would you need two kettles?
In some modern adaptations of the recipe there is an extra ingredient: honey. This originates from the 1922 Apicius-edition from Giarratamo and Vollmer where they emendate the text ”sufundis acetum’ as suffundis <mel> acetum. (“pour on vinegar, honey etc.”
First course for 8 to 12 persons; preparation in advance 10 minutes + 1 night steeping the barley; preparation 2.5 hours. 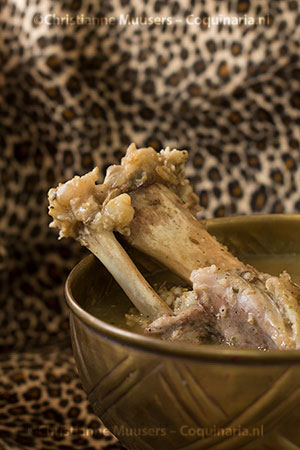 Soak the barley overnight in water. Then drain.
Separate the coriander leaves (cilantro) from the stalks, and pound them in the mortar with some salt. If you prefer using a blender, add some water to the herb and puree them. It is possible to leave out the salt if you want to use that sparingly.
Put the ingredients from the second herb mixture into the mortar and grind them finely.

Place the pork knuckle in a rather narrow, high pan. Add barley and the other ingredients from the first part of the list of ingredients.
Add water until the bone is submerged, depending on the size of your pan and of the pork knuckle. Bring to the boil, and skim off any froth. Then cover the pan with a lid and let the soup simmer on low heat for about two hours. Remove the bone and puree the contents of the pan with an immersion blender. Or do it the Roman way, by rubbing the soup through a sieve.
Put the bone back in the pan with the pureed barley. Add the second mixture of herbs and reheat the soup. Stir regularly so that the soup does not burn on the bottom of the pan.
Bring the soup to taste just before serving: add wine vinegar, defrutum and fish sauce. The given amounts are only indicative; you can change them according to taste.

Serve the tisana warm in small bowls. The knuckle remains in the pot.

Wheat and barley were the two most important grains in antiquity. Until the potato became acceptable food during in the eighteenth century, barley remained staple food. It was lower in status than wheat. Barley is still important as a basis for beer.

Very young wine (must), strongly reduced by boiling. Defrutum was used as a sweetening agent. Must is only available in wine-making regions during harvest time. An alternative is organic grape juice. Reduce that in an uncovered pan by two-thirds. From 1.5 litre grape juice you’ll obtain about 0.5 litre defrutum. The Romans used kettles of lead for making defrutum. Lead makes the defrutum sweeter, but it is very poisonous. The bones of ancient Romans contained a high concentration of lead.

This is the part of the leg of a pig between the ‘ankle’ and the knee. In Germany, eisbein is often cured with salt. For the soup I used fresh eisbein which was sold as ‘gammon’. The Latin text however, indicates a bare bone, without meat. The picture on the right shows the location of eisbein in a pig.

Levisticum officinale, looks like leaf celery but is a lot larger. It is a perennial. In the Netherlands and Germany the resemblance to Maggi soup seasoning lead to names as Maggikraut (German) and Maggiplant (Dutch). Lovage has a salty, strong taste that combines excellently with beef stock. But be careful how much of the herb you add, as it tends to dominate other flavours. The Romans loved lovage, and it was still in use during the Middle Ages.