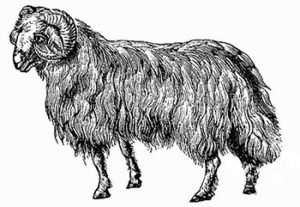 In Europe and large parts of the world there are sheep with small, thin tails. However, in the Middle East and North Africa you find since prehistoric times the so called fat-tail sheep. Every one in four sheep in the world is a fat-tail sheep. These sheep store the fat in the tail, instead of throughout their body. The tail is enlarged because of the fat. This storage of fat in the tail results in lean meat. The tail fat, which melts at lower temperature, was much appreciated in the Middle Ages in the Arab cuisine, not only to prepare meat, but also in sweet dishes. (source: Alan Davison, The Oxford Companion of Food). Recipe: Arab meatballs in aubergine sauce 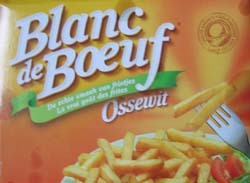 This is rendered suet. You can buy it at supermarkets as beef shortening (the picture shows the Belgian/Dutch commercial tallow for deepfrying), but you can also make it yourself (see here). Because fat congeals when it cools, you must filter it after each use when it is still liquid. Keep the fat in a cool place. By the way, if you prefer vegetable oil for deepfrying: that also has to be filtered before storing away. It may be clear that tallow is not to be used for vegetarians. If you use different kinds of fat for deepfrying (as I do), store them all with labels on which you note how often and when it was used.
Fat that congeals at lower temperatures (animal and vegetable) is less and less used in the Netherlands, probably because of the extra work it entails. And tallow, being an animal fat, is of course regarded as highly suspicious, because of the scare for bad fat. However … if you only use tallow occiasionally, nothing is wrong with it. Recipe: Black salsify fritters.

Starch extracted from manioc or cassave, a woody shrub with a bulbous tuber that orginiates from South America. The tuber is rich in starch, but also contains cyanide, so it is really not advisable to use cassave unprepared. But tapioca is safe to use. Recipe: Custard.

Be careful if you ever decide to grow your own tarragon.First of all, often Russian tarragon (Artemisia dracunculusvar. inodora) is sold as kitchen herb (at least in the Netherlands), while the term inodora indicates that this plant hardly has any flavour. So be sure to find real French tarragon. Second warning: if your tarragon is happy, it will start to grow rank, sprouting up everywhere. So choose the spot where you want to plant your tarragon carefully.
Dried tarragon has hardly any flavour. If you do not have tarragon in your garden, use frozen tarragon, or ask your green grocer. Recipes: Herb soup with potato dumplings, Salmon Salad, Garden Salad.

Is also known as kunjit or curcuma (Curcuma longa). Just like ginger and galanga it is a rhizome. The Dutch name is ‘yellowroot’, and that is exactly what turmeric is: very, very yellow, nearly orange. Stains from turmeric are difficult to remove (no wonder it’s also used as dye). The plant is indigenous to Southeast Asia and India. In some parts of the world, like the Isle Maurice, turmeric is called ‘safran’ (fresh turmeric is called ‘safran vert’, and what we call saffron is ‘jaffran’ (hindi) or ‘safran oriental’ (creole)). Recipe: Vindaye. 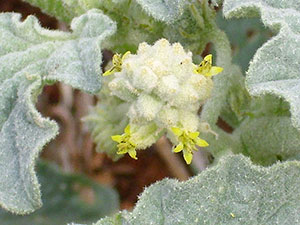 In the recipe for red claret from the sixteenth century the wine is coloured even more red with turnsole. This is a vegetable dye from Chrozophora tinctoria that can give a red or blue colour, depending on the acidity of the dish, like litmus.
One method of applying turnsole was to steep a piece of cloth in the dye, then transfer it to red wine which could be heated. The colour of red wine was not as deep as it is now, red wine looked more like rosé. Because modern red wine already has a deep red colour, it would be superfluous to use turnsole. Recipe: Claret.