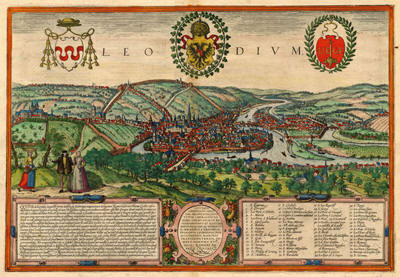 This mushroom pie from 1604 is much more modern than the Ménagier’s from the fourteenth century. No spices and sugar, but herbs to bring the stuffing to taste. The recipe comes from the Ouverture de cuisine, published in 1604 by Lancelot de Casteau. He was, according to the information the titlepage of the cookbook provides, cook for three consecutive bishops of the Prince-Bishopric of Liège (“Maistre Cuisinier de trois Princes de Liege”). It’s an interesting little cookbook, I’ll write more about it when I publish another recipe.
De Casteau has also provided us with a recipe for dough in his cookbook (see here), something you rarely find in medieval cookbooks.
More information about the culinary use of mushrooms can be found at the recipe for medieval mushroom pies. More about Lancelot de Casteau and his cookbook at the recipe for Tuna with mustard crust.

From the Ouverture de cuisine from Lancelot de Casteau. In 1983 a facsimile edition was published, and the text can also be read online.

This mushroom pie from 1604 is much more modern than the Ménagier‘s from the fourteenth century. No spices and sugar, but herbs to bring the stuffing to taste. De Casteau has also provided us with a recipe for dough in his cookbook (see here), something you rarely find in medieval cookbooks.
For a pie measuring 22 to 25 centimeter; preparation in advance 15 minutes; preparation 50 minutes. 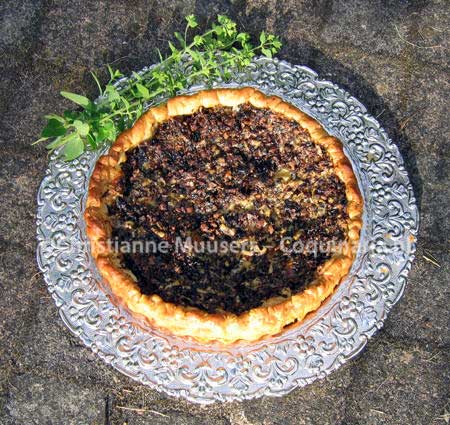 Clean the mushrooms, chop them in small or larger pieces.
Melt 3 tablespoons butter, fry the mushrooms, then simmer for while to evaporate the excess moisture. Let cool, then add herbs and cheese, and if necessary some pepper and salt.
You can also add some chopped dried and reconstituted mushrooms to the filling to enhance the taste.

Preheat the oven to 200 °C/390 °F.
Roll out the dough and dress it in one large pie mould, or several smaller moulds. Add the stuffing, and pour some melted butter over it. Put the pie or pasties in the oven and bake until done, depending on the size that will take twenty to fifty minutes.

If a French recipe mentions Gruyère, naturally it means French Gruyère. But -at least in the Netherlands- you hardly ever see French Gruyère, it’s almost always the Swiss cheese. And that is not so strange, because Gruyère cheese is named after the town Gruyère in the West of Switzerland. The French cheeses that are produced like Swiss Gruyère are not called Gruyère but Comté and Beaufort (or Belfort). The official French AOC (Appellation d’Origine Controlée) Gruyère is different from the Swiss one: it has holes. However, it is produced in the same region as the Comté and Beaufort cheeses. The French government has stipulated the exact size of the holes in the Gruyère cheese: “des ouvertures de dimension allant de la grosseur d’un pois à celle d’une cerise”. So, between the size of a pea and a cherry. And don’t ask me what the official size of a pea or cherry is!

Italian hard cheese of cow milk. There are two kinds, Grana Padano and Parmigiano Reggiano. The second costs about twice as much as the first. When using cheese in Italian dishes, it’s not necessary to always use the Reggiano. But sometimes you have to, like on carpaccio (the famous dish with raw beef). In some old French cookbooks Parmesan is called fromage de Milan. Pecorino is also an Italian cheese, similar in many ways to Parmesan, but made with sheep milk. Manchego is a hard cheese of sheep milk from Spain.
I sincerly hope that I don’t even have to explainthat you must never use packages of grated cheese in stead of grating your own.