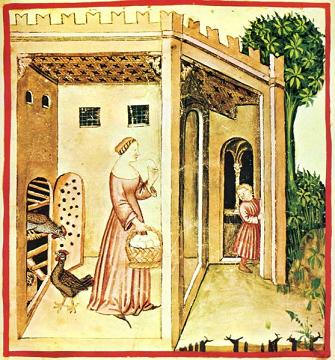 Eggs are very prominent in medieval cuisine, they are used as thickening agent in sauces and stuffings, as ‘guilding’ (roast meat and pasties were pasted with egg yolks), and of course there were dishes with cooked eggs, fried eggs, and omelettes.

Medieval recipes for stuffed eggs can be found here and here on Coquinaria, on this page is a recipe for eggs ‘poached’ or fried in oil (civé d’oeufz) with a mustard sop (souppe de moustarde), and on the extra page an gooseberry omelette (tasey van stekelbesyen). And on this page is a list with all recipes with eggs on Coquinaria.

The Viandier, the medieval bestseller-cookbook

The French recipes are taken from the Viandier, one of the most influential medieval cookbooks. The oldest version of this text is also one of the oldest surviving cookbooks from the Middle Ages. This oldest version, probably dating from the end of the thirteenth century, is not a book as we know it, but a scroll of parchment sheets glued together (like a kitchen roll). The text has been revised and extended several times during the fourteenth and fifteenth centuries. The author is unknown, but as early as the fourteenth century the Viandier was ascribed to Guillaume Tirel, nicknamed Taillevent (wind cutter, that’s how deftly he handled his knives). Since the oldest version dates from before Taillevent was born (he lived from 1315 to 1395), he can’t be the original author of the cookbook, but it is not impossible that some time during his impressive career (he was master cook for several French kings) he found time to add to this collection of recipes. The Viandier remained a bestseller for centuries. Already in the fifteenth century there were no less than six printed editions (incunabula), and it remained in print until 1615. On the picture below is the oldest version of the Viandier, the scroll with the name of the copyist, Petrus Plenus Amoris (Peter Full of Love).

Modern editions of the Viandier 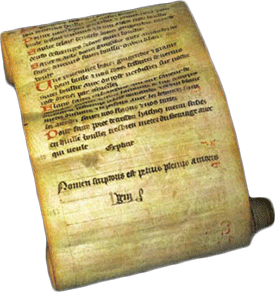 Nearly three centuries after the last printed edition, the first edition of the Viandier as a historical text was printed in 1892, edited by J. Pichon and G. Vicaire (see bibliography). This was not the first medieval cookbook to be edited this way, that honour befalls, as far as I know,  Le Ménagier de Paris, which was edited in 1846. The best scientific edition dates from 1988, by the Canadian historian Terence Scully (see bibliography).

On the internet are many websites that offer nineteenth-century editions of medieval texts, because these are free from copyrights. But these older editions aren’t very reliable. Not only because new manuscripts have been discovered since the nineteenth century, which help better understanding and reconstructing texts, but also because the nineteenth-century philologists felt the need to ‘amend’ the medieval originals without accounting for the changes. Nonetheless, the labour of these pioneers, making accessible many medieval books, has been of great worth (mind you, has been).

Really bad are the many ‘facsimile editions’ that have appeared these last years like a plague. Some people are making money by selling (poorly) reproduced old texts and printing them without any form of introduction or explanations. Often even the author remains anonymous, and what edition exactly is used for the facsimile is completely unclear. Just plainly ridiculous are the editions with scanned and converted text, in which the old-fashioned long s is reproduced by an f. The editors expect you to pay for this rubbish. And most of the time these texts are available for free on the internet. So: do not buy these publications!

A civé or civet is a thick sauce with fried eggs. The Viandier contains recipes for civé with veal, hare, rabbit, oysters and mussels. And this recipe with mustard.

The souppe de moustarde is not really a recipe for eggs, but the oil used to ‘poach’ the eggs in for the civé is being reused for this dish. It seems therefore to be expected that the two dishes were served at the same time. In my adaptation of the recipes I went a step further, and blended the two recipes into one.

By the way, this souppe is not a soup, but a sup: steeped bread, served with a more or less liquid sauce. The French Potage à la Reine from the seventeenth century is an example of a more liquid sop, and resembles the modern soup. This fifteenth-century Jacobine Sop is another example of bread-with-soup.

Th recipes for mustard sup and eggs are missing in the oldest version of the Viandier, because they were originally at the top of the reverse side of the scroll. And that top, with the beginning of the Viandier, is missing. That is why I have cited another manuscript, the one Scully used for his translation (Bibliotheca Vaticana, Regina 776 (olim 233 and 2159), ff.48r-85r). (edition Scully, recipes 83 and 84, pp.150/153, see bibliography).

What does the recipe actually say? The eggs are being ‘poached’ in oil, or fried. Then sliced onion is fried (in new oil?) and simmered with some wine, verjuice and vinegar. This sauce is poured over the eggs. Then the mustardsop must be prepared: toasted bread crusts that have been steeped in a mixture of oil (from the eggs), water and wine, are drained and placed in a dish, the mixture is brought to the boil with mustard and then poured over the bread. Let’s just make one dish out of these two recipes.
Concerning the poached eggs: whether that is done in water or oil, the result should be solid egg white, and a yolk that is firm on the outside, but still liquid inside.
First course or modern lunch dish for 4 persons; preparation in advance 10 minutes; preparation 15 minutes. 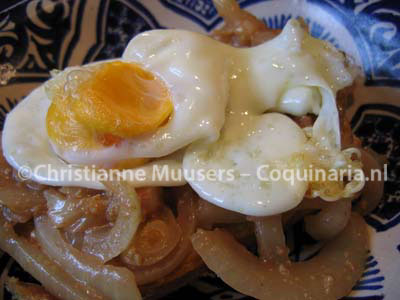 Take the crust off the bread. Cut into squares or triangles. braise the bread with some olive oil and toast it in the oven or on the grill.
Peel the onions and slice them into rings

Poach the eggs in enough oil (I used 8 deciliters, more than 3 cups). Heat the oil in a small stainless steel pan to 140 °C/285 ºF. Break an egg in a small bowl and let it slide from the bowl into the oil. The egg will sink to the bottom. Don’t panic, when the eggwhite has congealed, the egg will unstick itself. Then you can take the egg out of the oil with a skimmer and let it drain on a paper towel. The egg will be done in less than a minute. You can also simply fry the eggs. You need less oil that way, but the egg will be less compact.

Fry the onion slices in four tablespoons of the oil that was used for the eggs, or use fresh olive oil. Use medium heat and let the onion rings turn a golden colour. Then add wine, vinegar and verjuice. Reduce the liquids until half the amount, then remove the onions. Stir in mustard, salt and a little sugar. The sugar is added because the sauce is rather tart for modern taste.

Take four soup plates. Scoop the fried onions in them, with the sauce. Place a fried or poached egg on top of it. Arrange the toasted bread around the eggs. In the original recipe, the bread is steeped in the sauce. Use double the amount of liquids if you want to serve them that way.

This has always been a popular condiment. Mustard is made from the seeds of several species of the brassica-family (cabbage). From some varieties the leaves can be eaten, and the seeds not only serve to make mustard, but can also be pressed to yield a culinary oil, or distilled to make a medicinal oil. There are black, white and brown mustard seeds (from Brassica nigra, Sinapis alba en Brassica juncea), each with their own specific properties. The first to are indigenous to Europe, the brown mustard has its origins in Asia. medieval recipes for mustard: 1 and 2.

The juice of sour, unripe grapes that was used in the Middle Ages and up to the eighteenth century. You can still buy it, but you may have to look for it. In the Netherlands verjuice was also made from unripe apples and sorrel. You can use applecider vinegar as a substitute. Make your own Verjuice.

To poach (or deep-fry) an egg, relatively fresh eggs are best. Eggs have, except for a yolk, two kinds of egg white: thick and thin. How older the egg, the more thin egg white there will be. To get a compact poached egg, it is important that the egg white surrounds the yolk as close as possible, and that’s why you’ll need an egg with a lot of thick white. When you fry an egg, it’s easy to see the difference between thick and thin egg white. However, when (deep)frying in oil, it is better not to use too fresh eggs, because these contain more moisture (an egg looses some of that when it gets older). The oil can spatter out of the pan. I am speaking from experience …

The recipe for medieval poached eggs with mustard
An original way to serve egs: poached in oil with a sauce with wine and mustard. A French recipe from the 13th century.
© Author Christianne Muusers