The name sounds very exciting, but it just means that the top of the pie was to be decorated. No cannibalism here. This is the perfect pie to use up any leftover game meat, but you can also use, as it says in the recipe, rabbits and fowl from the fields. In medieval Europe Turks meant muslims, not specifically Turkish people. Medieval European science (and cuisine!) owed a lot to Arab science, but the islam was seen as the enemy of christendom.
The illustration is a fragment of the Bayeux Tapestry depicting William the Conqueror’s capture of England in 1066. Left to right: meat is roasted on skewers in a field kitchen while a pot is cooking over a fire. A baker is removing bread from a portable oven. Then the cooked dishes are being prepared to be served, and one servant blows a horn to announce dinner is ready. The guests are seated at the table. The red-haired man is William. Bishop Odon (to the right of William) speaks a blessing. A servant with a napkin over his left arm  carries another dish to the table. 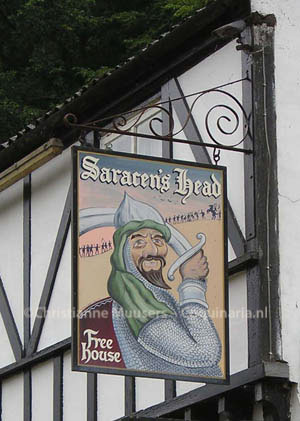 The origin of the pie named Turk’s head

The oldest version of the pasty called Turk’s Head can be found in an Anglonorman manuscript from the second quarter of the fourteenth century. There is another ‘Teste de Turk’ in an even older Anglonorman manuscript from 1290, but this a completely different recipe, not a pasty but a pig’s stomac stuffed with pork, chicken, saffron, eggs, bread and almonds, boiled. I guess the resulting giant meatball is the head. ‘Our’ recipe is for a pie or pasty that is decoreated with the image of a head. According to Constance Hieatt, who published both Anglonorman manuscripts, the Turk’s Head comes from an even older Arab recipe for a dish called Monkey’s Head (See Hieatt in Regional cuisines of medieval Europe, pp.27/29).

The recipe is written in Anglonorman. This was developed from Norman (a French dialect) as spoken by William the Conqueror and his army (remember, 1066 Battle of Hastings). Because of the relative isolation of the British Isles the dialect evolved into an amalgam  with  Anglosaxon, the language of the conquered inhabitants (who themselves once had arrived as conquerors). In this stage Anglonorman is more French than English.
This Anglonorman cookbook was translated into Middle English as part of the recipe collection De diuersa cibaria, in British Library Add. 46919 (edition Hieatt and Butler in Curye on Inglysch, see bibliography). The recipe for Turk’s Head was also translated, and is titled ‘Teste de Turt’. That still sounds rather French.

Anyway, the dish is meant as a subtlety, a dish to surprise and amuse guests. Compared to other subtleties like peacocks and swans in their feathers, or fire breathing boar heads this Teste de Tourk is rather tame. Another medieval subtlety on this site is the Fake fish.

The original text is from manuscript British Library MS Royal 12.C.xii, as published by Constance Hieatt and Robin F. Jones in 1986 (see bibliography).

I’ve allowed myself some freedom in interpretating this recipe. All modern adaptations agree that the Saracen’s head is made with chopped and coloured pistachio nuts (like a mosaic), but I have chosen for a closed pie or pasty with decoration on top. Because I liked it I have also added some minced meat of pork or veal, but you can leave that out if you want to. The rabbit and fowl can be roasted or boiled, and if you have any leftover game (hare, boar, deer) you can use that too. The pistachio nuts are not coloured, because the decorative effect is not needed in a closed pie.
As to the decoration: nobody forces you to use a Turk’s head. You can make a seasonal pasty with holly leaves, or put little rabbits and birds on it, or a cat devouring mice, whatever takes your fancy. Just as long as it is a spectacle to behold. Surprise and amuse your guests!
For 1 large pie (12 to 24 persons, depending on the menu); preparation in advance 1 hour; preparation 1 hour. 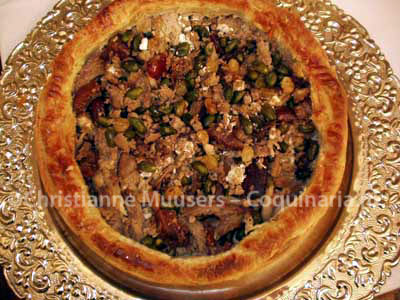 Fry the minced meat in lard, suet or butter.
Sprinkle rabbit and fowl with peper and salt. Heat lard, suet or butter in a large skillet, brown the meat quickly, then cover and simmer until it is done (about forty minutes). You can also roast the meat in the oven, baste regularly with the fat (suet, lard, butter). When it is done, let the meat cooluntil you can easily debone it. Cut into large chunks.
Steep the stoned dates five to ten minutes in honey that is heated with two tablespoons of water. Drain the dates, but keep the honeywater. Cut the dates in quarters.
Crumbe the cheese, or chop it.
Put everything in a bowl: minced meat, rabbit and fowl, spices, chees, dates, sugar and honeywater, mix well.
The crust: make a pasty dough, or use some ready-made if you really think you must. But making your own is more fun, and you get a special dough.

Heat the oven to 200 °C (400 °F).
Take a springform or a pie dish that is large enough to contain the stuffing (that depends on how large your rabbit and fowl were, whether or not you added minced meat, or how much leftovers you had). Grease the form with butter and roll out your dough. Place the dough in the piedish. If you use a springform, it is best to assemble the pasty: first cut out the bottom out of a rolled sheet of dough and place that in the springform. Then cut a long strip of dough, a little broader than the springform is high, and cover the sides. Be sure to seal the side to the bottom sheet of dough by gently pressing the edges togehter. If you want to be sure, roll a thin strip of dough between your palms and press that against the edges. Let the dough that hangs over the top of the form be, you’ll use that to seal the cover.
Scoop the stuffing into the dough, cover with pistachio nuts. Close the pasty or pie with another sheet of dough. Press the edges of the cover and the sides together and cut out a small hole or two to let the steam escape. You can incorporate these holes into your decoration (eyes, mouth). 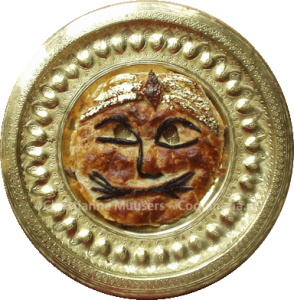 Now the name of the pasty becomes clear: use leftover dough to decorate the cover with a ‘Turk’s head’ or something else. Colouring and gilding is done after baking, but you can baste the dough with eggwhite (for a light glaze) or egg yolk (for a darker glaze). Put the pasty or pie in the middle of the oven, bake for about forty minutes. Let cool five minutes after taking it from the oven before demoulding.
To finish the decoration apply food colouring paste with a small brush, and gold leaf or silver leaf.

One of the obsolete spices that is making a come-back because of today’s wish for exotic dishes. The scientific name is Piper cubeba. It is also called Java pepper (three guesses why …), or tailed pepper because of the stalks still attached to the berries. The taste is peppery and slightly bitter. As a substitute you can use black pepper with piment (allspice).

Gold and silver can be eaten. They pass through the body without doing anything, either harmful of good (despite the claims of some therapies). So, why would one eat gold? Because it is expensive and glamorous of course!
Practically anything can be gilded. But first you’ll have to find out where gold leaf or silver leaf can be bought. In the Netherlands one place to look is shops that supply artists. You can buy “booklets”. The leafs are separated by tissue paper, and are carried by another thin sheet of paper, that you use to transfer the gold leaf, because it is so thin that they fall apart very easily. A booklet of 25 gold leafs of 8×8 centimeters cost about 25 Euro. Before you transfer the gold (or silver), make a ‘glue’ of one part egg white and four parts water, brush that on where you want the gold leaf to stick. If you want to gild on icing or frosting, only use egg white. Don’t expect a shiny result like wedding ring, to get that, you’ll have to use bolus (red earth) as base, and polish the gold afterwards.
Food to gild can be anything, like the rind of a melon, christmas cakes and other festive cakes and cookies, and of course this medieval pasty. In the Middle Ages gold leaf was also used to gild the beaks of large birds or the tusks of a boar’s head. The soufflé Rothschild, a recipe from Escoffier, is made with kirschwasser in which small pieces of gold leaf float.

Partridges are related to pheasants. Both are delicious fowl, much appreciated noble fare for centuries. Not just because of their taste, partridge meat was considered to be excellent food to help recovering patients regaining their strength. Female partridges (hens) are tastier than males. That is because the females have a higher percentage of body fat (regrettably, the same goes for humans).
The hunting season is from September to January. However, partridges are listed as a threatened or near threatened species in many countries and regions. So if you buy partridges, choose farm raised ones. They may taste ‘less wild’, but at least the wild birds are safe. 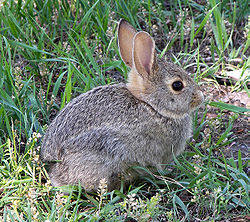 Once they only lived on the Iberian paeninsula and Morocco. Romans brought them to Italy, and soon the fertile animals spread throughout Europe. Except for the British Isles. There, they weren’t introduced until late twelfth century, probably by Norman nobles. Maybe one of them brought a pair of rabbits for his love, and this escaped (the pair of rabbits, not the love). Before you knew, all of Brittain was suffused with fluffy rabbits (like in the Teletubbies). On the European mainland rabbit hunting was a hobby for ladies, boar and stag hunting were considered too dangerous. The rabbits were kept on enclosed grounds. Rabbits were also fattened in hutches. In Australia rabbits weren’t introduced until 1859, and then they formed a plague, because they had no natural enemies.
In cookbooks rabbits have a special place: recipes for wild rabbits can be found at the section with recipes for small game, but for recipes for fattened rabbits you’ll have to look under poultry. Indeed, the meat of wild rabbits looks and tastes different from that of tame ones.