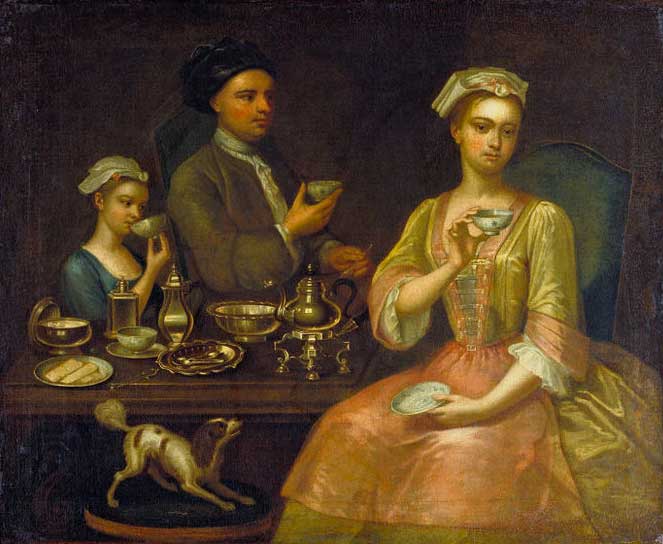 This is a recipe for small but rich cookies. High tea is not customary in the Netherlands, but we do serve a biscuit or cookie with a cup of coffee or tea, in the morning as well as in the afternoon.

At what time of the day would these cookies have been served in the eighteenth century? Probably at the end of a meal: according to De Volmaakte Hollandsche Keuken-Meid (The Perfect Dutch Cook) from 1746 the last course of a meal for ten to twelve persons in a well-to-do family should consist of a big cake, fruit, fresh cheese or custard, saucers with butter, sugar and cinnamon, and all kinds of small pastries and cookies.

The source of this eighteenth-century recipe is De volmaakte Hollandsche Keuken-meid […] (The perfect Dutch (woman)cook), written by “A noble lady, recently deceased in The Hague”. The identity of the author has been discovered some years ago, I have written more on this subject at the recipe for Sup with prunes. The cookbook first appeared in 1746, and remained in print until 1857. In the same year as the cookbook appeared, there also appeared an Appendix, the Aanhangzel, with another 285 recipes. The Dutch publisher Sijthoff made a beautiful facsimile edition in 1965 (reprinted 1973) from the fifth edition of the Volmaakte Hollandsche Keuken-Meid from 1761 and from the Aanhangzel from 1763. Ii used this facsimile edition, but the content is the same as that from previous ones.

The recipe is from De volmaakte Hollandsche Keuken-meid […] (The perfect Dutch Cook or Kitchen maid), written by “a distinguished lady, passed away recently in ‘s-Gravenhage”. The first edition was in 1746, and it was reprinted several times, for the last time in 1857. In the year of its first appearance there was already an appendix that was published separately, the Aanhangzel, with 285 more recipes. The Dutch publisher A.W. Sijthoff printed a facsimile edition in 1965 and 1973, of the fifth edition of Volmaakte Keuken-Meid from 1761 and of the Aanhangzel from 1763. This is the edition I have used, but in the online edition of 1752 (that is the third edition) the recipe is exactly the same. The dnbl presents the online edition as the one from 1746, but that is incorrect. See here for the measures in the text.

When I first adapted this recipe, back in 2007, I just left out the ambergris. It is very hard to come by, and very expensive. Also, the dough was too soft, more like a thick batter. So I baked it by spreading it out on a baking tray and cutting out the cookies after baking. I also used sugar glazing instead of finishing the cookies by placing them back in the oven with sugar until it had melted on top. Ten years later I finally acquired some labdanum, a much more affordable alternative to ambergris. That was the reason for a new attempt at adapting the recipe, and this is the result. It was much better, and the labdanum really adds a depth of taste that was lacking in the previous version. This time I had really baked ‘excellent cakes’!
Yields about 50 cookies; Preparation in advance 25 minutes plus time for the dough to rise; preparation 1½ hour. 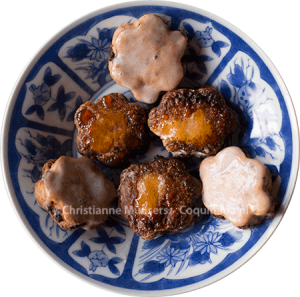 Make the dough by first kneading flour, sugar, spices, salt and butter. If you use dry yeast, mix it first through the flour. Then mix cream, yeast mixture or lukewarm water, egg, egg yolk and rosewater and add it slowly to the dough. Cover it with a damp cloth and let it rise in a warm place. Depending on the yeast used, it needs one hour (baker’s yeast) or several hours (beer yeast). In my previous house, I always raised dough and batter in the central-heating boiler cabinet. But you can also heat the oven to 50 °C, and if it has cooled something (use an oven thermometer), put it in the oven with the door slightly open. And even simpler: you can use a bread machine to knead the dough and give it a rise. Then mix the currants and raisins.

Because I wanted to use Labdanum in this recipe as a replacement for ambergris, I made the dough with active yeast. Then I used one and a half deciliter of hot water to dissolve the resin in. The resulting dark liquid was added to the cream and eggs, together with a few remaining unsolved particles. If anyone has a suggestion how to get the resin well-divided in the dough, I’d love to hear that.

Preheat the oven to 150 °C (300 °F). The currants and raisins will burn at higher temperatures, and the recipe calls for a ‘laauwe oven’ (a lukewarm oven).

Sprinkle the worktop with flour, and sprinkle also some flour over the dough. Roll the dough out to a thin sheet, and cut cookies, using a cookie cutter or a knife. Place the cookies on an oven tray and bake them in the middle of the oven until they are almost done, about 40 to 50 minutes. However, check the process, because each oven works differently.

To finish the cookies following the original recipe, take the cookies out of the oven when they are almost done. Raise the oven heat to 200 °C (390 °F) with top heat. Stir two egg whites with rose water. Coat the hot cookies one by one with the eggwhites using a cake brush and sprinkle immediately with powdered sugar. Put the baking tray back in the oven, now slightly above the center, and bake until the sugar is caramelized, but not yet burned. In my oven the cookies needed about 10 minutes. 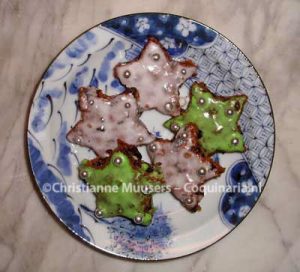 When preferring to glaze the cookies, cook them a little longer and let them cool completely on a cake grate after baking. In the meantime, make the glaze by mixing egg whites and rose water and possibly a few drops of food colouring, and powdered sugar. Keep stirring until all sugar is dissolved and the optional food colouring is evenly distributed. Coat the cookies with a thin layer of glaze using a cake brush. Allow the glaze to dry for a little while, and then cover again.

Serve these cookies with a cup of tea or coffee. Or dress them up as christmas cookies, like inn the picture on the left.
The cookies will keep for several days simply out on a tray.

Vierdevat, loot, pint, these measures were in use before the United Kingdom of the Netherlands (Netherlands, Belgium and Luxembourg) was founded after the end of the French occupation in 1816.  Even the ounce and pound are not what they seem. And the confusion gets even worse when you realize that measures are different in different cities. In the introduction to the  Aanhangzel, van de Volmaakte Hollandsche Keuken-Meid (Appendix to the perfect Dutch Kitchen Maid) it is written that “although in the first part, as being written by a lady from The Hague, pints of The Hague are being used, which are one and a half times as large as the Amsterdam pint, we use the Amsterdam pint in the Appendix” So now I am wondering whether a cook in a town in Brabant would have three sets of pints, for recipes from Amsterdam, The Hague, and her own town.
Below I have ‘translated’ the old measures from the recipe to the metric system.

Not to be confused with amber that is a resin. Just like musk (a secretion of the gonads of the musk deer and some other animals), ambergris was used in medieval Arab dishes, but now they are mainly ingredients for perfumes. You could say ambergris is a pellet of the sperm-whale. It is a waxlike substance in which indigestible remains like the beaks of squid are encapsuled. From time to time the sperm-whale emits large pellets, just to be rid of them. ‘Fresh’ ambergris smells of shit (manure, if you think that sounds better) and has a dark colour. Influenced by sunlight, salt water, and air the ambergris matures. It looks lighter, grayish, and the smell gets to resemble isopropanol (that is what Wikipedia says). Ambergris is one of the ingredients of Chanel no.5.
You can find ambergris washed ashore on ocean beaches, or fish it up from the sea, if you are lucky. When you want to buy some ambergris, be prepared to pay a lot. There is a vegetable substitute, labdanum resinoid, the purified resin of the cistus rose (Cistus labdanifer, see below).

Until the fifteenth century fermenting was caused by wild yeasts. Bread was baked with sourdough. Beer (or ale), that was already brewed in prehistoric times by the Egyptians, was fermented with the help of wild yeasts. From the fifteenth to the seventeenth century the yeasts used for brewing were refined by adding the froth of a previous brew to the wort (malted grain, the basis of the beer). In that time only top fermenting beer was produced, hence the yeast in the froth.
Brewer’s yeast was also used to bake. Baker’s yeast became available in the middle of the nineteenth century. It was considered a great improvement, because the quality of the yeast was more consistent, and it tasted less bitter. Whether brewer’s yeast or fresh baker’s yeast is easily available depends on where you live. You can also use dried yeast, which will need less rising time. Just see what you can get. Just don’t confuse real brewer’s yeast with the health tablets.

Labdanum resinoide is purified resin of the cistus rose (Cistus labdanifer). It can be used instead of ambergris, but it is also an ingredient in incense and perfumes. According to some people labdanum resin is identical to the biblical myrrh, one of the gifts to the new-born Jesus from the three Kings. Wikipedia however, identifies myrrh as a completely different plant. The confusion dates from the translation of the Old Testament from Hebrew to Greek. The resin of labdanum is also identified as the stuff which the ancient Babylonians used to groom their beards. The resin is traditionally harvested by combing the beards of goats that grazed among labdanum bushes. Maybe that is where the babylonians got the idea.