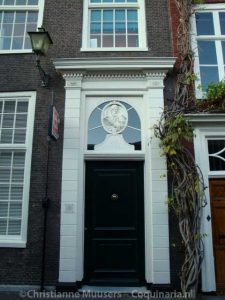 A dish for Lent

This recipe for a ‘sup’ from the middle of the eighteenth century demonstrates the original meaning of the word soep (soup in English). The (toasted) bread at the bottom of the dish soaks in the juices of the dish, and adds filling carbohydrates to it. Often the bread soaked up so much that one can hardly speak of a soup in the modern sense anymore.

The recipe for pruimensop (sup of prunes) is from De volmaakte Hollandsche keuken-meid (litt. The perfect Dutch kitchen maid) from 1746. The Dutch ‘keukenmeid’ however, is actually a female cook in this period. This book will be referred to below as Hollandse Keukenmeid. More information about this cookbook is provided in the recipe for Fyne kaaks (Delicate cookies). Also, for cooking with fresh plums, take a look at this recipe from the seventeenth century.

Was the writer of the Hollandse keukenmeid a Roman-Catholic?

There are several recipes ‘for Lent’ in the Hollandse Keukenmeid. Lent refers to the six weeks between (and including) Ash Wednessday till the Saturday before Easter during which the Catholic church forbade the consumption of meat and dairy products.
In the new Dutch Union (later Republic) the state religion was the ‘Nederduits Gereformeerde Kerk’ or Dutch Reformed Church from 1579 (the Union of Utrecht) up until the French occupation in 1795. The Dutch Reformed church did not implement weekly fast days or periods of fasting like the Catholic Lent or Advent, but in times of war or epidemics, incidental fast days were permitted. Also, Catholics were prohibited from openly practising their religion.
On the title page of the Hollandse Keukenmeid, however, it is announced that this cookbook contains recipes “even for the Roman-Catholics for fish days and during Lent” (zelfs voor de Roomsgezinden op Visdagen en in de Vasten). One of the illustrated menus with which the first part concludes is a three-course meal “for when one receives Catholics or just wants to serve fish”. Chapter VII, which includes the recipe on this page, contans recipes  for “Cooking, stewing of all kinds of dishes, and the preparation of many pottages and soups for in as well as outside of Lent”. Chapter V, which offers recipes for frying meat, fish and vegetables, also contains special dishes for Lent.

Another indication of a Catholic connection could be the address of the printer, Steven van Esveldt: “In the Kalverstraat, the third house from the Roman Church  ‘de Papegaay'” (this building, originally a private house, became a clandestine church from 1672 onwards). This address however, is only mentioned from the fourth edition (1755) of Hollandse Keukenmeid onwards. Before that, Van Esveldt was established at the Beurssteeg near the Dam in Amsterdam. The Hollandse Keukenmeid may have taken the special needs of Catholics into account, but this cookbook’s target audience was mainly Protestant.

Even though it was not officially forbidden to be a Roman-Catholic, one was not allowed to practise this religion in public. There are still many (former) clandestine churches that served as statie (a church in a non-Catholic area without a bishop in charge) during the seventeenth and eighteenth centuries. The staties were considered missionary churches by Rome. The picture above shows the entrance to the  old Catholic ‘statie’ H.H. Jacob and Augustine in the Juffrouw Idastraat in The Hague. This was the city where the supposed author of the Hollandsche Keukenmeid, “a distinguished lady was recently deceased” (eene voornaame Mevrouwe onlangs was Overleeden). This church has been in use since 1722. You can still visit and admire the beautiful baroque interior.
The clandestine churches, schuilkerken (hidden churches) in Dutch, were not very hidden, as can be deduced from the mention of the Roman church in Amsterdam by printer Van Esveldt. Incidentally, that church is now called the Peter and Paul church, and can still be visited as well. Originally this church consisted of just one room in a family residence. In 1709 the whole building’s interior was converted into a church. When freedom of religion became a part of the Dutch constitution in 1848 (but only christian religions), this church was again expanded and the modest entrance at the Kalverstraat received a Neo-Gothic front (see here). 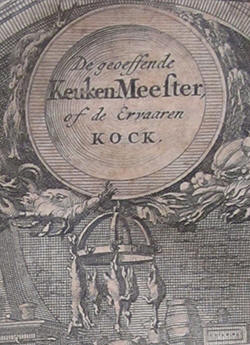 How to explain the recipes for fish and fast days if the author of the Hollandse Keukenmeid was not Catholic? These can be explained by an important source of the cookbook, the Geoeffende Keuken-Meester of de Ervaaren Kock (‘The practised kitchen master or experienced cook’, which will be referred to as Keukenmeester from here on out). This Dutch adaptation in two volumes of Le Cuisinier François (1651) by François Pierre La Varenne appeared in 1701. The French cookbook contains no less than four categories of recipes which strictly follow the rules of the Catholic church for meat days, fish days, Lent and Good Friday.
According to Annie van ‘t Veer, author of Oud-Hollands kookboek on Dutch culinary history which appeared in 1966, the Hollandse Keukenmeid took eighty-nine recipes from the Keukenmeester, which amounts to more than 25%. She does not mention which recipes or whether these numbers include the Aanhangzel (‘extension’) as well. Therefore I looked into this myself, and it was more work than I anticipated. The books have a completely different structure; the Keukenmeester more or less follows the Cuisinier, the Hollandse Keukenmeid however offers the recipes not according to their place in the menu but according to their method of preparation.

I could not find more than thirty-seven recipes in the Hollandse Keukenmeid which derived directly from the Keukenmeester, even though some of these recipes were simplified. Furthermore, there were forty-four recipes that had similar titles, but described different dishes. So the Hollandse Keukenmeid did not borrow recipes as extensively from the Keukenmeester as Van ‘t Veer supposed. The Aanhangzel of the Hollandse keukenmeid has only two recipes in common with the Keukenmeester, but these were probably taken directly out of the Cuisinier. Seven recipes in the Aanhangzel have similar titles, but different dishes. In total, I found ninety recipes were similas in recipe or just in recipe title. These are probably the recipes Van ‘t Veer refers to, plus one extra recipe.

The recipe below is one of the recipes that the Hollandse Keukenmeid did copy from the Keukenmeester; two recipes, one for prunes and one for raisins, are combined into one. These recipes do not appear in Le cuisinier François of La Varenne; his recipe for ‘pruneaux’ (XXVI.88) is not the source of the Dutch recipes.

In the Volkoomen Neerlandsch Kookkundig Woordenboek (the complete Dutch culinary lexicon, also known as The Frysian cook) by Catharina Zierikhoven that appeared in 1772, there is a recipe for ‘Pruim-soep’ (prune soup) that resembles the recipe on this page. But Zierikhoven adds butter to her dish, probably the reason it is no longer a recipe just for Lent. She also mentions the Frysian name, ‘Pruim en Bôlle’, and adds that in its simple form this dish can be served to children or the servants. 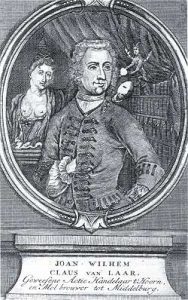 On the title page of the Hollandse keukenmeid there is mention of a distinguished lady from The Hague, recently deceased, who was the source of the recipes. That has always been regarded as a myth. But it wasn’t until 2001, when Ton Jongenelen published an essay in which he identifies a Dutch hack writer of dubious reputation as the author of the popular cookbook, that we know this for sure. The article of Jongenelen can be read online (in Dutch, see the bibliography). Jan Willem was born in 1697 or 1698 in Amsterdam, in a quaker family with the surname Claus. Later he added the surname of his mother’s mother  – Van Laar – to his name. In 1725 he joined the protestant reformed church, he was decidedly not a catholic. Claus van laar died in 1769. The well-documented essay of Jongenelen describes his turbulent life and carrer as a hack. The satirical portrait of J.W. Claus van Laar dates from 1746, the same year that de Hollandse keukenmeid appeared. In the background are an immoral woman and a little devil. Not quite the ‘distinguished lady from The Hague’!

From De volmaakte Hollandsche keuken-meid, scan from the facsimile-edition of the 1761 edition (identical to the third edition from 1752). By the way, I have no idea how you can boil anything in tepid water (“laauw water”), but that is what the recipe says.

33. Prunes, and raisins soup for lent, how to make them.

Take dried prunes or raisins, and let them boil in tepid water. Then stew them a little with some sugar,nutmeg, cinnamon, cloves and white wine. Then steep your bread and add prunes and raisins, is good.

The recipe title mentions both prunes and raisins, but in the recipe itself it reads prunes or raisins. The Hollandse Keukenmeidcombined two recipes, so you are probably meant to choose. But I couldn’t choose; I just used both.
Side dish or dessert for 4 persons; preparation in advance 5 minutes; preparation 30 minutes. 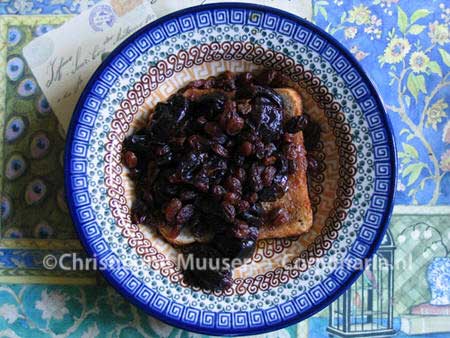 Put everything except bread in a pan. Heat it gently, taking care that it does not actually boil. Simmer for half an hour on very low heat. The alcohol will evaporate, so you can serve this ‘sup’ to children without any qualms.

Place one slice of bread in each deep plate. Pour the warm soup over it. The bread will absorb most of the liquid.

Plums are drupes, like apricots and peaches. There are two ‘versions’: fresh plums, and dried prunes. Confusingly enough, the French call fresh plums prunes, and dried ones pruneaux. The famous plum pudding on the other hand is prepared not with fresh fruit but with dried prunes. In Dutch, it is simple. A plum is a pruim, and a prune is een gedroogde pruim.