In Asterix in Britain, the heroes Asterix and Obelix’ first meal on British soil is eaten in a pub called ‘The Jolly Boar’. Obelix is deeply disappointed, his favourite boar has not been roasted, but boiled. To make matters even worse, it is served in a green mint sauce. Boring. Had Obelix lived fourteen centuries later, he would have been confronted with this atrocity in his own village! This page discusses that ‘boring’ green sauce.

Sauces are very important in the medieval cuisine. Many recipes for grilled or broiled meat or fish never exactly describe how you are supposed to prepare it, but consist solely of directions for making the accompanying sauce.
According to the medieval helath theory based on the four temperaments, the sauce determines the nutritional value of the main ingredient. The saulce verte or green sauce was very popular. It consists primarily of green herbs (hence the name of the sauce), mostly parsley, but sometimes mint or sage. There are many medieval versions of this recipe, and pesto (Dutch) or pistou could be considered as a descendant of this sauce, even though the main ingredient is not parsley but basil. The same could said for the mint sauce the British and Irish still serve with roast lamb today. 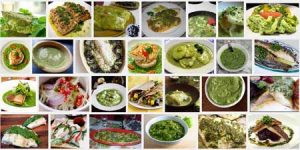 The most basic recipe for green sauce is also one of the oldest medieval culinary recipes that have survived to this day. It is from the oldest version of the Viandier, a French cookery manuscript from the end of the thirteenth century. It struck me that in this ancient text you already find a direction which is often neglected by modern cooks: use garden herbs WITHOUT THE STALKS! Even some restaurants serve ruined dishes bacause a lazy cook chopped a bunch of herbs without cleaning them first. When preparing stock, it’s no problem. But for a delicate sauce you always carefully remove the stalks before adding the herbs to the dish.

The number of recipes mentioning green sauce in the Viandier indicate popularity of the sauce. It was served with boiled beef, pork or lamb (recipe #3 according to the edition of Scully), and especially with fish. Freshwater fish such as pike (luz, #97), perch or bass (bar, #100), herring (alosa, #101, not in the oldest version of the Viandier), carp (carpe, #102), tench (tanche, #104), bream (breszme, #105), roach (poulaille of baissaille of rossaille, #106), chub (chevesnes, #108), small fry (meinuise, #113, only found in the Vatican version from the early fifteenth century), but also some saltwater fish such as conger eel (congre, #121), turbot (turbot, #137) and brill (barbue, #138). And this doesn’t even include all the recipes referring to green garlic sauce (aulx vers, #158). In a footnote to his commentary on the recipe for green sauce Scully mentions seven other early recipes for the same green sauce.

Medieval Dutch cookery books, the earliest of which date to the end of the fifteenth century, also contain several recipes for green sauce. In Wel ende edelike spijse (Good and noble food, UB Gent 1035) a recipe is included for capons with green sauce. The first part of the convolute Gent KANTL 15 provides a recipe for a general green sauce with parsley or garden sorrel, and contains recipes for several sauces that are clearly related to green sauce as well (such as sage sauce and ‘sausse van poterie‘, sauce with garden herbs). In the second part of the same convolute there is a recipe for roast bream with verjuice, ginger, parsley “ende allerhande goet cruijt” (all kinds of good herbs). It seems to be a recipe for a green sauce, with a different name (in the edition Braekman 1986 (2) recept# 152). 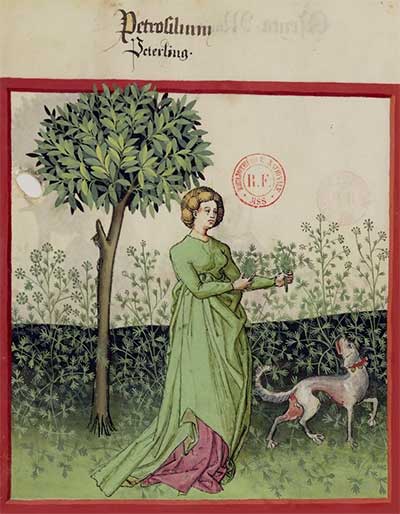 Parsley is the most used kitchen herb in Europe. Travelling eastwards to Asia, you’ll find coriander (cilantro) has replaced parsley as the ubiquitous herb. Some even call cilantro ‘Chinese parsley’. Perhaps the Chinese call parsley ‘European cilantro’?
Parlsey is a biannual herb that literally goed underground during winter. The leaves are used most often, and parsley root is regaining popularity as well. The very small parsley seeds on the other hand, are rarely used in the kitchen.
Medieval recipes mostly use parsley as the herb for green sauce. According to medieval health theory, parsley helps to relieve ‘blocked passages’: it is a diuretic and stimulates menstruation, but too much parsley will cause headaches. To prevent that, parsley can be tempered with vinegar. This information, and the picture on the right, is from the Tacuinum sanitatis (more on this book here). That the medieval theory was not as obsolete as you might think, can be surmised from the – modern – warning to pregnant women to be careful with parsley: excessive intake can cause miscarriage.

This sauce does not contain any fat or sugar. The sauce is not cooked. So, unless you are a follower of the latest fashion and abhor and reject all carbohydrates (in this case: bread crumbs), you can enjoy this sauce without any qualms. However, because of this complete lack of fat, the sauce’s taste is a little thin. That is why I serve it only as a first course in combination with other dishes, and not as a course by itself.

In my version I used trout (half a trout per person). It can be made with any fish, or even meat according to preference. Experiment with the ratio water/vinegar/verjuice, because some vinegars are more acid, and some people are more charmed by a tart dish than others. Even the thickness of the sauce can be adapted to your taste.
The amounts in the recipe below are for enough sauce to cover (the fillets of) four trout with a thin layer of sauce.
First course for 8 persons; preparation in advance 10 minutes; preparation 5 minutes. 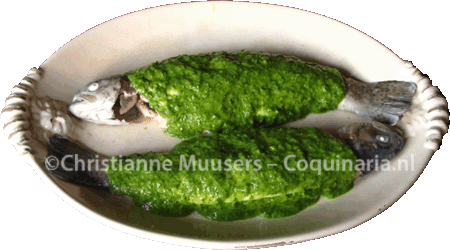 Carefully pick the parsley leaves from the stalks. Chop the parsley.
Peel ginger and grate on a fine grater, or use ginger powder.
Crumble the white, crustless bread in a blender, put in a bowl. You can also steep the bread with some of the liquid, blender it and then put it in a bowl. You do not need to rinse the blender, it will be used again for the sauce.

The modern equivalent of the pestle-and-mortar is the electric blender. Believe me, if medieval cooks could have chosen, they would have thrown the heavy things out immediately!
Combine chopped parsley and ginger in the blender with one tablespoon vinegar and verjuice or cider vinegar. Puree until smooth. Now add half the breadcrumbs. Puree once more and then determine whether you want to add bread or liquid and how much. You can make the sauce as thick or thin as you want. Taste it, and add a little water if the sauce is too sour or add vinegar if it’s too bland.

The most elegant way to serve this dish is to use whole fish and cover everything between head and tail with a layer of green sauce. When I prepare this dish for a tasting after a lecture on medieval food, I prepare the dish as a salad: the fish in bite-sized pieces, with the green sauce as ‘vinaigrette’.
The trout in the picture were poached for eight minutes in salted water with a dash of vinegar, and left in the liquid for ten more minutes. The result: the fish meat was done but still firm.

The Viandier prefers to serve the sauce with freshwater fish, but occasionally suggests it with saltwater fish and even with boiled meat. For trout the Viandier actually recommends another sauce, but a small-sized trout is the ideal single-person fish.

This is the green juice of sour, unripe grapes that was used in the Middle Ages and up to the eighteenth century. You can still buy it, but you may have to look for it. In the Netherlands verjuice was also made from unripe apples and sorrel. You can use applecider vinegar as a substitute. Make your own Verjuice.