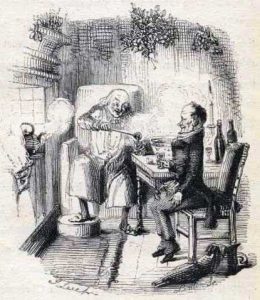 Today many people have lost all feeling for what food is seasonaland what is not. Everything is available throughout the year. The bitter or Seville orange is one of the few exceptions. Its season is short, from mid-December to February, and even then this fruit is hard to find (at least, in the Netherlands). If you have found a supplier, buy a great quantity and freeze the oranges you do not use immediately. Or make lots of marmalade.
If you want to freeze Seville oranges, pour water that has just been boiled over them, dry them well, wrap them separately in plastic foil and then store them in a freezing bag.

The bitter orange, Seville orange or bigarade (Citrus aurantium) is not a variety of the sweet orange, but a separate species that stems from the same plant family as rue, the Rutaceae. Bitter oranges precede sweet oranges by several centuries in Europe. They were planted on Sicily as early as the eleventh century; sweet oranges were not introduced into Europe before the end of the fifteenth century. 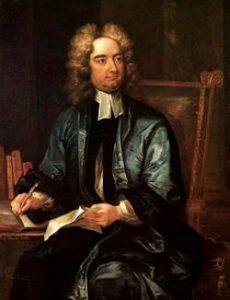 The Anglo-Irish author Jonathan Swift (1667-1745), who also wrote Gulliver’s travels (1726), describes what one did with oranges in the eighteenth century in his Verses Made for Fruit Women. They went in sauce for veal, in brown ale to bring it up to taste, they were roasted and mixed with wine and sugar, and drunk as ‘sweet bishop’:

Come buy my fine oranges, sauce for your veal,
And charming, when squeezed in a pot of brown ale;
Well roasted, with sugar and wine in a cup,
They’ll make a sweet bishop when gentlefolks sup.

Swift omitted marmalade in the culinary possibilities of (bitter) oranges, but in the eighteenth century preserving bitter oranges as marmalade was already an established practice. Hannah Glasse offers a recipe for marmalade from bitter oranges. Originally however, marmalade was made with quinces (the Portuguese word for ‘quince’ is marmelo). C. Anne Wilson has written a beautiful study on the subject of marmalade (see bibliography).

Apician morsels; or Tales of the Table, Kitchen and Larder

The recipe on this page comes from a booklet that appeared in 1829 with the pedantic title Apician morsels; or Tales of the Table, Kitchen and Larder. The anonymous author uses the pseudonym Dick Humelbergius Secundus. The book is for the largest part a compilation of (translated) texts of other writers. It is not certain who is hiding behind the pseudonym, but Denise Gigante presents two candidates in her florilegium of nineteenth-century writers on gastronomy (Gusto): William Beckford and, Gigante’s own favourite, Richard Chenevix. Apician Morsels is a compilation of essays, not a cookery book. However, in one of the last chapters, ‘Compensations. — Consolations and Obligations’, we find a ‘collection of gourmand recipes’ for the many warm, spiced drinks that the English love so much. The first recipe is for Bishop, other recipes are for Posset, Punch, Swig, Wassail, and several Cordials.

Warm spiced bishop wine is a popular drink (for adults, of course) at the Dutch feast of Saint Nicholas. In the United Kingdom bishop is a popular drink around Christmas, at least in the second half of the nineteenth century. At the close of Charles Dickens‘ A Christmas Carol (1846), a jolly Scrooge promises the flabbergasted Bob Cratchit improved working conditions with “a Christmas bowl of smoking bishop” (see the picture at the top). But actually December is very early in the season for Seville oranges.

Originally, this spiced wine was prepared with roasted oranges or lemons. Maybe this caused the drink to be named Bishop: in her entertaining book Ladyfingers and Nun’s Tummies, Martha Barnette states that in the North of England the expression to bishop something means ‘to burn something’ (in this case, the orange or lemon). But the explanation most often mentioned for smoke is the steam rising from the warm wine. 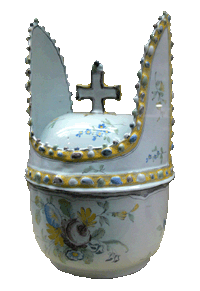 Bishop was also a popular drink on the European continent. In eighteenth-century Germany there even were special serving vessels in the shape of a bishop’s mitre. On the right you see a beautiful example from 1767 (source). The oldest Dutch recipes mention ‘gebraaden bittere oranje-appelen’ (roasted bitter oranges, Chomel, 1768), or ‘gele oranjeappelen’ (yellow oranges) that are roasted on a rack (Maria Haezebroek, Keukenboek, 2nd edition, 1852). The wine is sweetened with sugar or honey, spiced with cinnamon and cloves, and diluted with water. Oranges were expensive, but in the eighteenth century you could already buy ready-made ‘essence of bishop’ to bring wine quickly to taste.
Many cookbooks offer recipes for Cardinal (with rhine wine or champagne and maraschino) and even Pope (with sweet wine). A modern, simpler Dutch version can be found here. 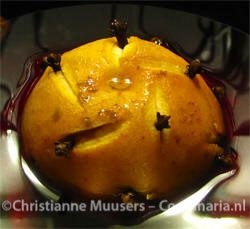 In the English recipe on this page, the fruit for bishop is roasted “by the fire”. English cooking ranges in the nineteenth century still had ‘open fire’, with a grate in front that could be lowered. Scrooge and Cratchit are sitting in front of such a range. For the real, authentic taste you should roast the bitter orange or lemon on a barbecue at some distance from the coals.
In the picture on the left is the roasted bitter orange, cut and pierced with cloves, floating in spiced port wine.

This is the recipe from Apician morsels; or Tales of the Table, Kitchen and Larder by Dick Humelbergius Secundus (pseud., 1829) pp.308/309. (online edition). He too ends his recipe with the verses of Swift. A translation does not seem necessary.

Receipt, or recipe, to make bishop
Make several incisions into the rind of a lemon; stick cloves in these incisions, and roast the said lemon by the fire. Put small but equal quantities of cinnamon, mace, cloves, and all-spice, and a race of ginger, into a saucepan, with half a pint of water; let it boil until it be reduced one half. Boil one bottle of port wine; burn a portion of the spirit out of it, by applying a lighted paper to the saucepan which contains it. Put the roasted lemons and spice into the wine; stir it up well, and let it stand near the fire ten minutes. Rub a few nobs of sugar on the rind of a lemon; put the sugar into a bowl or jug, with the juice of half a lemon, (not roasted) pour the wine upon it, sweeten it to your taste, and serve it up with the lemon and spice floating in it.
Oranges, although not used in bishop, at Oxford, are, as will appear by the following lines, written by Swift, sometimes introduced into that beverage:

“Fine oranges,
Well roasted, with sugar and wine in a cup,
They’ll make a sweet bishop when gentlefolks sup”

Because I loved to use them, I used ‘Swift’s version’ for the bishop, but lemons are also excellent. The drink really warms you from the inside. Smoking bishop has a subtle taste, more complex than ‘ordinary’ bishop when the oranges are not roasted in advance.
For about 8 glasses; preparation in advance 10 minutes; preparation 40 minutes. 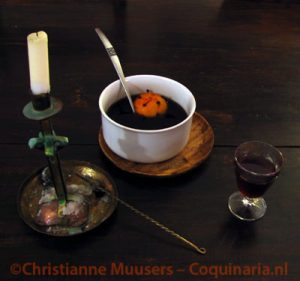 Pour boiling water over the Seville orange or lemon to remove the wax layer.
Cut a decorative pattern in the rind, stick some cloves in the incisions.
Squeeze one half Seville orange.

Place the Seville orange on an oven shelf in the middle of a warm oven (170 °C/340 °F) and roast it until the orange has turned a light brown, about thirty minutes.
Take an ovenproof pan, pour in water and add spices. Bring to the boil and reduce the water to 1/8 liter (1/2 cup). Add Port wine and the still hot Seville orange. Put the lid on and place the pan ten minutes in the oven at 120 °C/250 °F.
Combine sugar and orange juice in a heatproof bowl, and add the contents of the pan (spices and orange included).

This drink should be served really hot, so use glasses that are heatproof! As soon as your lips can stand it you can drink the Smoking Bishop.
Because of the added water and the heating of the wine, this Bishop will contain less alcohol than the Port wine it was made from. But still, be careful because this warm drink can still intoxicate!

This is one of the spices that Columbus took to Europe from his second voyage to America (1493-1496). It is called ‘allspice’ because it tastes like a combination of cinnamon, nutmeg and clove. ‘Jamaica pepper’ refers to the original place of origin. The spice is the dried, unripe fruit of the Pimenta dioicia. Allspice is used in European recipes from the sixteenth century onward.