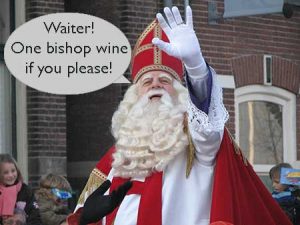 The Dutch consider Bishop wine as a typically Dutch mulled wine for Sint Nicholas Eve. But it appears that its origins are not Dutch at all. According to the large Woordenboek der Nederlandsche Taal (Lexicon of the Dutch Language, published  in installments from 1864 to 1998), bisschopswijn has English roots. The name indicates the likenis of the red drink to the bishops’ robes. Later, the Dutch would associate the bishop’s wine with one bishop in particular, Saint Nicholas or Sinterklaas. More recipes for Dutch Sinterklaas.

On this page is a modern version of Bisschopswijn, but I have also published a niniteenth-century English version called Smoking Bishop.
For 1 bottle Bishop Wine; preparation in advance 10 minutes + 1 night; preparation 5 minutes. 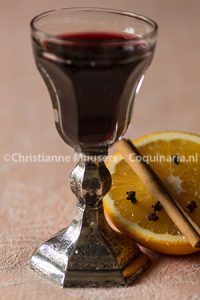 Pour boiling water over the orange to remove the protecting layer of wax. Organic oranges also often have this layer. Stick the cloves in the orange, and put it in a pan together with the other ingredients. Cover with plastic foil and let it rest for one night.

Remove the plastic foil and heat the wine to no more than 70 oC/160 °F.  If so desired, add ½ to 1¼ cup hot water to the wine. Strain the wine through a cofee filter and pour while the wine is still hot.

The wine must not be boiling hot, but to be on the safe side, do not use the best crystal glasses. Even tea glasses are possible. 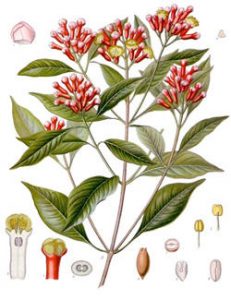 Cloves are the unopened flower buds of the Syzygium aromaticum, a plant that originally only grew on the Maluku Islands (the ‘spice Islands, Indonesia). Their shape reminded the Dutch of nails, hence the name ‘kruidnagel’ (spice nail). The English clove, which does not seem to have any connection with nails, derived from the French clou (de girofle), which also means ‘nail’.
The trade in cloves has been turbulent. During the Middle Ages, Arabs bought the spice from local producers and sold it in Europe. In 1514 the Portuguese conquered the Maluku Islands and they held the monopoly on cloves for as long as a century. The Dutch pinched the islands in the beginning of the seventeenth century and introduced draconic measures (death penalty to the smugglers of plants) in order to prevent the growing of cloves anywhere outside of Ambon. In 1770 the very aptly named Frenchman Pierre Poivre succeeded in breaking the monopoly on cloves (and nutmeg/mace) by stealing some plants and transferring them to Mauritius and later toMadagascar.