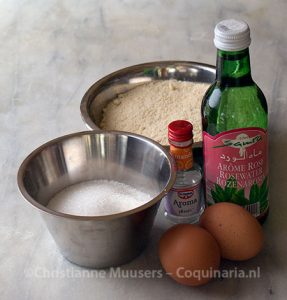 Almond paste has been around since medieval times. Hardly anyone makes it at home nowadays. It is for sale in stores, sometimes with substitutes as beans or apricot kernels instead of almonds. There is nothing wrong with that, but the original paste is with almonds, so here is a recipe with them. In the Netherlands whole eggs are used for preparing the almond paste rather than just the whites. When made with ready-bought almond flour, making almond paste is very easy and it takes but a few minutes.
For 1 pound almond paste; preparation 10 minutes + 1 day rest. 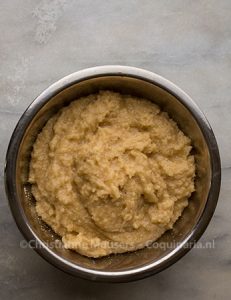 Temper almond flour, sugar and eggs. Add as much rose water and almond essence as desired. For slightly moist almond paste use more egg, for dryer paste use less. Put the almond paste in the refrigerator for at least a day before further use.

Use it in Dutch speculaas with almond paste, or Dutch pastry in the form of a letter (banketletter)

Use grated lemon peel instead of rose water.

Almond flour is simply ground blanched almonds. They can be bought in specialized food stores and maybe patisseries, but depending on where you live you may have to order them online. Grinding almonds at home is difficult because of the high fat content of the nuts: the flour wil quickly turn into a paste. Ground almonds are comparable to shredded coconut: you can make ‘milk’ with it. Almond milk is used in medieval recipes to thicken sauces (just like coconut milk is used in the Indonesian and Indian kitchen). During Lent almond milk was the most important substitute of dairy products (milk, cheese, butter, eggs). There are recipes for almond butter (think: peanut butter) and almond cheese, which resembles marzipan. The substitution of almonds for dairy products was a good one: 100 gram almonds contain twice as much calcium, five times the amount of phosphorus, and no less than hundred times as much iron as 100 gram milk (without industrial additions). Also, almonds contain more vitamin B1, B2, B6, and more beta-carotene, 10% fibres and no cholesterol. Just one negative point: they also contain ten times the calories fat milk has.