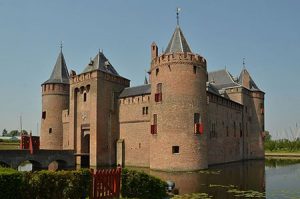 In May 2003 I had the opportunity to cook a medieval meal in the only surviving medieval castle of the Netherlands, the Muiderslot (origins date from the 13th century). This castle is now a museum well worth visiting, and is promoted by the bureau of tourism as ‘Amsterdam Castle’. The kitchen was not medieval, but filled with modern appliances. In this kitchen, with the assistance of five experienced participants, I prepared amongst several other dishes a peacock, a rather impressive carp, and the ‘teste the turt’, known from several English medieval cookbooks. The recipe for this pie with game was published in 2007.

The medieval banquet was prepared for a Dutch television program that wanted to show some culinary history (Markant Nederland). It was an opportunity to do something that I had wished to do for some time: preparing a peacock. The program was broadcasted on 23 August 2003. 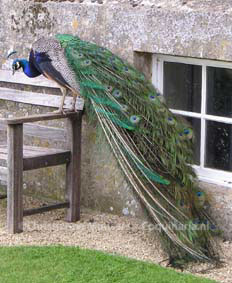 It was not easy to find a suitable peacock. In the spring of 2003 there was an outbreak of fowl disease which caused thousands of chickens and other fowl to be slaughtered. The peacock I could finally lay my hands on was in its second year, the tail feathers were not yet developed (that happens in the third year). I was slightly dissapointed, but when I saw the beautiful peacocks at Corsham Court in Southern England I realised that a fully grown peacock would have been rather difficult to handle. 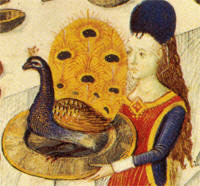 The custom of serving a peacock in its feathers was popular throughout medieval Europe. It was a spectacular dish, often served as a sublety or entremet during festive meals. All present at the meal would admire the beautiful bird when it was brought ceremoniously to the table of the host. The admiration was probably somewhat less when it came to eating the peacock: its meat is very dry. No wonder the peacock dissapeared from the tables when the turkey (which in my opinion is also rather dry) made its entrance in Europe during the sixteenth century!

In medieval recipes the skin of the peacock is sprinkled at the inside with spices, then it is draped uncooked over the cooked peacock which may or may not be decorated with gold leaf. Nowadays we realise the health hazards of contact between raw and cooked meat. That is why I decided to bring the peacock to a taxidermist, who removed the skin very carefully. He then prepared the skin and strechted it over a hollow form, a cloche. The peacock could now be placed as a dome over the meat.
When not in use, the peacock resides in my study on top of a bookcase. Now, nearly two decades later, more people have acquired a peacock, swan or other game bird to decorate their historical tables with.

I can imagine some people will feel slightly shocked at the thought of consuming such a bird as the peacock. Please read this first: eating peacock meat is not forbidden. However, it is a beautiful animal, which does not deserve to end up as the latest novelty in the refrigerated displays of supermarket and poulterer. I have prepared a peacock once, because I wondered what the result would be of all those medieval recipes. I admit it, I was curious.
However, I absolutely do not propagate the general consumption of peacocks (look what happened to the ostriches). Luckily for the peacocks the medieval recipes themselves mention geese and pheasants as excellent replacements. When experimenting with the recipes I even used an ordinary chicken. The result was delicious (and the meat more tender). 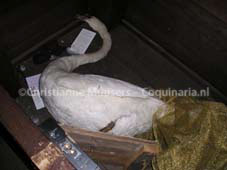 Peacocks were not the only birds to be served as subtleties. Swans were served in the same way. Nowadays swans are protected birds. The stuffed swan on the photograph on the left I found accidentally when I lifted the cover of a large chest in the Tower of London, out of curiosity. It must have been a decoration for historical tableaux. Years later, in 2017, I had a taxidermist prepare a swan of pies, but he did not do a good job and I could not use the bird.

Herons and cranes were also eaten during the Middle Ages. For all these ‘big birds’ there were recipes. Dutch culinary historian Joop Witteveen has written a series of essays on this subject in the English periodical Petit Propos Culinaires (bibliography).

Why was serving these birds so popular at the high tables in the Middle Ages? Assuredly such a large bird, redressed in its feathers, was an impressive sight. According to Platina “peacocks and other edible birds … are … more suitable to the tables of kings and princes than the lowly and men of little property.” (De honeste voluptate, Liber V, h.1, pp.242/3). But, he continues, peacocks and pheasants are most popular with the nouveau riche. The keeping of these birds, or hunting them, was a privilige of the nobility. Birds like that were not on sale in market stalls. 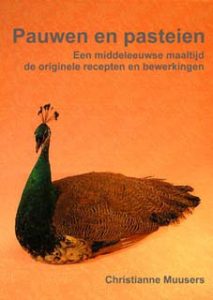 In the booklet Pauwen en pasteien (Peacocks and Pies), I have collected some medieval Dutch recipes on the preparation of peacock. The other dishes that were prepared on the Muiderslot are also included in this book. Some of the recipes have later been published on this site, like the strawberye pudding.

The original edition of Pauwen en pasteien is sold out. I had the idea of making a second, revised edition, but finally decided to publish the original document  online as PDF on Academia.edu. However, I would have put some things differently now.