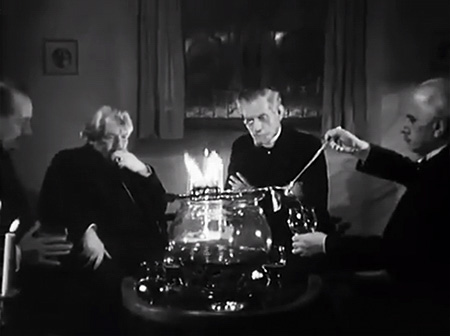 In October 2018 I gave a guest-talk for an international group of ex-pats in The Hague on spiced wines through the ages. It was a great evening, especially because these people, from all over the world, quite liked the experience. One of the people present was Thomas, a German. He asked me whether I had ever heard from the Feuerzangenbowle (fire-tongs punch). I had not. He explained that this was a popular drink during December in Germany. Some weeks later he invited those present on the first evening to prepare and taste the Feuerzangenbowle. He also showed the famous film with the same title from Heinz Rühmann

The film comedy was produced in Germany in 1944. It belonged to a genre of films that were meant to let the population forget the misery of the war for a short while. The entertainment industry in the USA and elsewhere did the same, many musical and romantic comedies appeared on the big screen and on stage. The German actor Heinz Rühmann (1902-1994) played the lead, and was also director of the film Die Feuerzangenbowle. The complete movie can be seen on YouTube, German spoken of course. Although Rühmann had continued work during the Nazi regime, he regained his popularity after the war. Today he is still one of the most popular German actors from the twentieth century.

The first version of this film was produced in 1934 – also with Heinz Rühmann – called So ein Flegel (What a rascal). In 1970 there was a remake of the 1944-film, but this version never gained the popularity from the original. 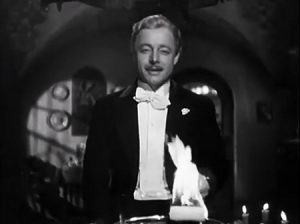 On the picture is Rühmann in the opening scene, with the eponymous fire-tong punch. Both film and punch are still part of the festive things to do during the Christmas season in Germany. If it is cold outside, it is time for Feuerzangenbowle. The only time this punch is not prepared, at least by Thomas, is during Sylvester. The sweet drink does not sit well with champagne, but more important is the aspect of fire safety: more than once fires started with carelessness during the preparation of this punch. However, as long as the people are reasonably sober and take care that no inflammable objects are near, it should be safe. 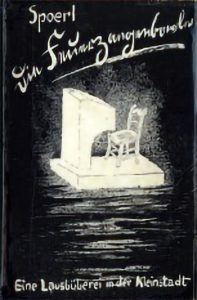 The film is based on a book, the novel Die Feuerzangenbowle; Eine Lausbüberei in der Kleinstadt (‘The Fire-Tongs Punch; Mischief in a Small Town’) from Heinrich Spoerl (1887-1955). The book was first published in 1933 and is available online (see bibliography). There has been a legal dispute about the (co-)authorship of Hans Reimann who contributed to the film script of the 1934 film So ein Flegel, but this had been won by Spoerl. Even nowadays there are stage and musical performances of Spoerl’s story, and in 1970 there was a radio play of the book.

There are sources according to whom Krambambula is an alternative or older name for Feuerzangenbowle, but that is not quite correct. This drink was created by the Dutch Mennonite Ambrosius Vermöllen who at the end of the sixteenth century emigrated to Danzig (now Gdansk in Poland) because of his faith. His distillery, which was called Der Lachs (the salmon), produced a kind of cherry gin with the name Crambambouli. The company also produced Danziger Goldwasser (Kirsch with slivers of gold leaf).

Krambambula was a popular drink among German students during the middle of the eighteenth century, as can be seen by the song Der Krambambulist (link to German text and soundtrack). The song suggests that krambambula was drunk often and with great enthusiasm, but the preparation remains unsung. During the nineteenth century the term Krambambouli became a general name for all kinds of mulled wines. Today krambambula is the national drink of Belarus.

Modern recipes for this punch mention different amounts of oranges and lemons to be added, and for more, less or different spices. But essential to all versions is the sugar cone that is drenched in rum and then set alight. The sugar melts and caramelizes and drips into the punch. The result is a deeper flavour than when the sugar is simply dissolved in the wine. The sugar cones can be bought in Germany, and are available online. They weigh 250 gram a piece (half metrical pound). The sweetness of the punch is determined by the amount of wine and sugar that are already in the it. I added three to five tablespoons sugar for each bottle of wine. I experimented with adding no sugar at all, just the caramelized sugar from the cone, but that was too dry to my taste. I have no idea what the alcohol percentage of the punch is when it is consumed: the wine is heated, which results in less alcohol, but then rum is added, which adds alcohol, which is then burned with less alcohol as a result. To flambé the sugar cone, use Navy Strength Rum (54%) or Stroh Rum (80%). The latter results in heavier caramelized sugar (which will taste less sweet).

It is not necessary to use a special bowl for Feuerzangenbowl but using special sugar tongs for burning the sugar cone is advisable. Sugar cones can be bought a piece or in packages of six. On the German Amazon the cones are sold as Kölner Zuckerhute.

Hot drink 9contains alcohol) for 8 to 12 persons (with servings of about 2 dl per person); Preparation in advance 15 minutes; Preparation 15 minutes.

Pour boiling water over orange and lemon (when not using dried peel). Then rinse and dry the fruit and cut them, peel and all, into thin slices. Put wine and fruit in a pan, add sugar and spices. When not using fresh citrus fruit, add the dried peel of Seville orange. Alternatively, just add a ‘tea bag’ with ready-bought spices. However, I like to temper the wine according to my taste. Heat the wine to 80 to 90 °C (175 to 195 °F), cover the pan and let steep for about 15 minutes. One can then strain the wine, or keep everything in it, according to taste.

Place the pan with the warm wine (reheat if necessary) on a burner with bio-ethanol. Do not use tea lights, as these produce not enough heat to keep the wine warm. Check the surrounding where the punch is to be prepared for anything inflammable (around and above the bowl) because the flames can be quite high. The vase with flowers behind the punch in the picture was removed pretty quickly. Put the fire tongs over the pan or bowl, place the sugar cone on it. Drench with rum, and then light it. Be careful because it will immediately catch fire. Use long matches or a barbecue lighter. Dim the lights to enjoy the effect of the flaming sugar. The sugar will caramelize, and the melted sugar will drip into the wine punch underneath. When the flames are disappearing before the sugar cone has been consumed by them, pour more rum over it. But do NOT do this straight from the bottle, because the fire could ‘jump back into the bottle’. Rather use a long-handled metal spoon to pour the extra rum. When the sugar cone has been consumed completely, the punch is ready.

This punch is to be served hot, so use special punch cups or glasses, or festive Christmas cups.

A large punch bowl containing several bottles of wine is great when presented in a company of several people. But what to do when there are just two of  you? In that case, use ‘small fire-tongs and mini-sugar cones or sugar lumps to prepare the Feuerzangenbowle one cup a piece. It will look less spectacular, but one can prepare fresh punch every time. For a company of two or three, put one bottle of wine in a pan with sugar, citrus fruit and spices. The amount of sugar to be burnt should be about 20 grams, the equivalent of 4 sugar lumps or 2 mini sugar cones.

The sugar tongs will show discoloration because of burning the sugar cones. Submerge the tongs in water immediately after use and use a scourer for difficult stains. Some discoloration will remain, but that should not be a problem. It gives a history to the object in question, which is more interesting than just using immaculate implements.

The flavour of anise is much appreciated all over the world. Aniseed is indigenous in the Middle East and was used around the Mediterranean at least from the fourth century B.C. The seed is from an annual plant called Pimpinella anisum. The distinctive sweet taste comes from anethole, an essential oil. In China grows Illicium verum, a small evergreen tree related to magnolia. Its dried, star-shaped fruit are also rich in anethole.  Star anise is an interesting addition to the punch, but I can imagine that not everybody appreciates the flavour in combination with wine. In that case, just leave it out.

Piment or all spice

This is one of the spices that Columbus took to Europe from his second journey to America. It is called ‘allspice’ because it tastes like a combination of cinnamon, nutmeg and clove. The alternative name ‘Jamaica pepper’ refers to the original place of origin. The spice is the dried, unripe fruit of the Pimenta dioicia. Allspice is used in European recipes from the sixteenth century onward

Rum is a fermented and distilled drink made from molasses (sugar cane syrup) or straight from sugar cane juices. Rum is available in several strengths, from 37½% to 80% alcohol. Rum matures in oak barrels after distillation. For the Feuerzangenbowle rum with a minimum of 54% alcohol is needed (‘Navy Strength’). Read more about rum on Wikipedia. By the way, from my mother I have learned to prepare rum grog to combat a heavy cold: juice of half a lemon, a royal dash of rum and a spoonful of sugar, topped up with boiling water. Drink hot. I do not whether it cures the cold, but it is an excellent sleeping potion!

Recipe for Feuerzangenbowle
This festive wine punch from Germany is fun to prepare during the Holiday Season.
© Author Christianne Muusers